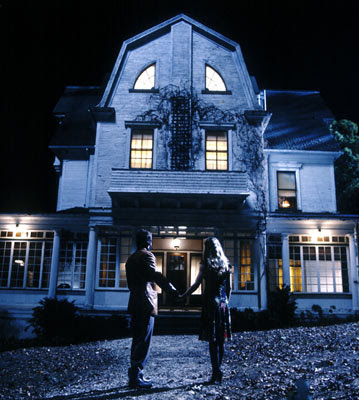 The rationale behind this excursion, of course, is perhaps not that difficult to grasp. Michael Bay, the producer who spearheads this project (and not coincidentally was also the primary oversight behind the much-maligned remake of "The Texas Chainsaw Massacre"), is seemingly obsessed with the prospect of updating old horror films that claim to be "loosely based" on truth. Maybe someone should have informed Mr. Bay, though, that both the original "Massacre" and "Amityville" films, aside from being mediocre in the first place, were never so much about facts as they were about elaborate and gruesome showmanship. They were cinematic red herrings designed to distract you from the obvious: that reality is seldom as loud and obnoxious as the movies want it to be. If he succeeds at any point during this rather grating achievement, though, it is in the notion that he has finally come up with an idea that makes his past endeavors seem all the more inspired. Whereas the modern tweaking of "The Texas Chainsaw Massacre" at least had a certain visual stigma that kept it from being a total bore, the "Amityville" remake is so dejected on so many levels that it doesn't even have the energy to make you dislike it.

The story will no doubt be a mere side detail for the target audience. At the top of a hill in a remote town known as Amityville, a large foreboding house sits nestled between trees, a lasting reminder of a terrible tragedy that befell a family which lived there only a year before the film opens. New couple George and Kathy Lutz (Ryan Reynolds and Melissa George), who stumble upon the property as it hits the seller's market, know nothing of its dreadful secrets but are enticed by the rather low price attached to it. It is seemingly their dream delivered on a silver platter. George, on the other hand, takes it upon himself to ask the relevant questions. "There's gotta be a catch," he tells the real estate agent. Yes, the catch is that your newly-discovered abode was the crime scene of a brutal family murder, in which a man loaded up a shotgun and quickly disposed of every one of his relatives while they were asleep upstairs.

In reality, some people would choose to pass on the purchase after being armed with such information; on other occasions, some can actually get past the initial weirdness of the situation and find that kind of house livable. But horror movies are not so much about decisions as they are about drastic consequences, and the Lutz family, going against the obvious warning signs, decides to move into the place regardless of its past history. The result: 100 minutes of slow but steadfast mental deterioration, creepy noises, scared priests and voices coming out of the basement. It's not enough for a house in a movie to be just a mere scene of tragedy, either; no, this story requires it to not only be scary, but physically haunted. Or possessed by evil, I dunno. In either case, a deathly presence sits over the residence and slowly but surely makes its way into the lives of this couple and their three children. The little girl, Chelsea (Chloë Grace Moretz), makes acquaintance with the ghost of the other girl who once lived in the upstairs bedroom. The family babysitter, who once knew the family that lived there before, reveals their murders in gruesome detail. And George, who at first is the most skeptical of the house, confines himself to the basement and begins spiraling out of sanity. A priest who comes to exercise the house of its demons at the request of George's wife Kathy can only offer one sentence of advice: "Get you and your family out of this place." But why the urgency? According to a vague plot device, the previous family died only 28 days after moving in, a deadline which may be repeating itself as Kathy's husband starts to unleash his progressing madness on everyone around him.

Other than narrative specifics, what exactly do we have here? A collection of clichés, formulas and familiar dialogue exchanges, of course. It is a given that the movie will begin with a scene in which police detectives survey the crime scene and profess that they've "never seen anything like it" (quick - how many movies can you name with that exact same line?). It is also a given that any and all supporting characters involved in the plot will quietly remove themselves from the conflict just as things start getting crazy, and all main characters will stay until the last minute before they take that final plunge towards staying alive. But who really cares? This is not a picture that is very dedicated to anything other than striking the same note one interval after another. Even the inevitable supernatural revelations, which may or may not be the sole detail that distinguishes the remake from being any different from the original, are static. Nothing soars, nothing sparks, and nothing piques general interest at any point of this movie whatsoever. If Amityville were a town where nothing out of the ordinary ever happened, a story about two old ladies drinking coffee in their living room would create a better buzz than what is concocted here.

The actors look like wild animals caught in the headlights of a speeding vehicle. Poor Ryan Reynolds, whose professional career (outside of maintaining a chiseled physique) can't seem to get on any right track, makes yet another unfortunate misstep here; his is a character whose eventual mental transformation is a one-note gimmick when it should be even more. Reynolds seems genuinely enticed by the prospect of piercing the defenses of an audience, but the screenplay by Scott Kosair gives him no room to perform as an independent. He is little more than the plot's power tool, and not a very interesting (or menacing) one at that. The same goes for the film's younger stars, who are supposed to be the emotional center of a story littered with hints of psychological abuse, but are seen here as little more than loud showpieces in a film that demands its characters to scream and run at all the opportune times.

I don't know whether I should hate the movie for what it is or pity it for failing to muster up the force to even make it hate-worthy. Either way, we are not dealing here with a product that deserves any more attention than the recognition that its original source material was greatly flawed from the very start. The key to any remake, of course, is not how much it resembles a past film but how much it changes it. "The Amityville Horror" needed those changes. Unfortunately, instead of a much-deserved remodel, all we got in this case was a cheap patch job. Nice try, but you can still see the holes.