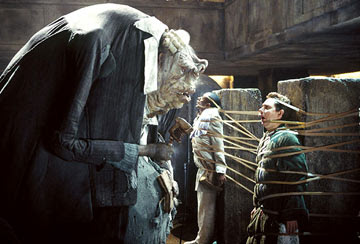 Unless you're one of those pre-educated individuals who will be subject to this material on screen, then chances are you are not going to walk away with a sudden urge to explore Mr. Adams' off-the-wall universe further. And who can blame you? Any film that survives on the basis of creating vague reference points and unresolved story or character arcs is not playing the game with a full deck to start with, and the fact that none of the filmmakers seem to make any conscious effort to render the substance into something user-friendly certainly inflames the wound.

Having said all of that, why do I, a "non-Hitchhiker" as they say, find myself speaking somewhat favorably about the film? Simple: once you get past all the impenetrable dialogue exchanges and meandering plot twists, what you have is, at the core, a film with solid vision and heart. The people who made this picture were no doubt dedicated admirers of the source material, and though their fanaticism may have interfered with proper cinematic judgment calls, they nonetheless succeed in exhibiting enough enthusiasm to make the final result watchable to a certain point.

For those who are ignorant to the premise just as much as I was, here's a crash course - Arthur Dent (Martin Freeman), an ordinary British man, wakes up one morning to discover that 1) his best friend Ford Prefect (Mos Def) is an alien, and 2) Ford will beam him off of Earth just as a race of ugly alien creatures arrive to destroy the planet. Why are they doing this? According to a brief announcement made to residents of the blue world, Earth is in the way of a planned intergalactic expressway across the galaxy, and it is being demolished so that these plans can finally be put into motion. Unfortunately, both Arthur and Ford's narrow escape from the demolition forces them to take refuge on the ships of the very alien creatures that destroyed it in the first place. And these aren't any ordinary aliens, either - big and burly, with physiques that resemble piles of dried snot, these beasts are not the kind of things you would ever willingly hitchhike through the galaxy with, especially if you are not big on aliens reading poetry (don't ask).

The running purpose of Arthur and Ford's adventures is that Ford is in the process of revising the Hitchhiker's Guide to the Galaxy, a sort of electronic encyclopedia that details all the necessary tactics and information for, well, surviving the galaxy. On their journey, they cross paths with a ship harboring the president of the universe, Zaphod Beeblebrox (Sam Rockwell), who is in search of the answer to life itself and would do just about anything in order to get it, including putting his own passengers in harm's way. Also aboard the ship are Trillian (Zooey Deschanel), a fellow Brit whom Arthur made acquaintance with just a few days before, and Marvin (Alan Rickman), a manic depressive robot who occasionally interjects himself into conversations in order to make all sorts of gloomy revelations ("I have ideas, but you probably wouldn't like any of them anyway").

Conceptually, the movie looks great, has a distinctive flair for the imaginative, and is always eager to play up the sense of adventure in between all the space travel. The problem is that a lot of the finer details are rather obtuse; the characters engage in conversations that seem more like final words on unknown previous encounters (consider a scene in which the president and a mechanical preacher played by John Malkovich discuss the outcome of the last election, barely hinting at the notion that something went down between both prior to the movie's current timeline), and most of the inevitable one-liners they offer up are either met with blank stares or faces of confusion. The comedy is meant to be offbeat - no mistake about that - but to what extent does it rely on writer Douglas Adams' own arsenal of literary quips? Not very much, I gather. Words often exist without rhythm and the majority of the audience chuckles not because the jokes are successful, but just because it's hard to fault the film for at least trying.

The film is the directorial debut of Garth Jennings, a man who, regardless of approach or conviction, is at least motivated by a fully-realized canvas here. There are shots in the movie that are simply too wondrous to ignore (the photography is especially fluid during a sequence when Arthur is taken into a planet-making factory), and the sets, particularly concerning space ship interiors, look and feel perhaps just like we expect them to. This is, alas, not an Earth-shattering achievement (pardon the pun) by any stretch, but one that is good enough to service as a solid starting point for a new career in the movies. He has an ambitious and eager eye, but maybe next time he'll concern himself a little more with having an engaging voice as well.