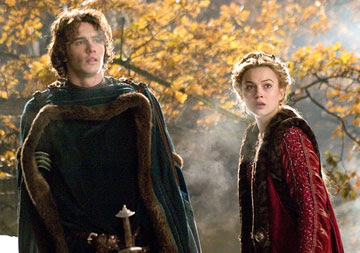 The film stars James Franco and Sophia Myles as the characters in question, a British man and an Irish woman whose lives intersect quite by accident, after he is mistaken for dead in battle and shipped off to the sea in a burial ceremony. He washes up ashore across the sea in Ireland, where Isolde, the daughter of the king, has just been unwillingly betrothed to the boorish captain of the royal army. His time away at war only means she is too eager to make company of someone a little more pleasant, and when a wounded Tristan needs care, she is the first in line to provide it (albeit secretly). Of course he, a lonely guy himself who has lived with guardians since the brutal slayings of his parents years before, is more than willing to take whatever care she wishes to provide.

All of this is set to the backdrop of a war-torn Britain during the dark ages, when the withdrawal of the Roman Empire scattered the established alliances and sent the isles into civil war. The tribes of England face offense from more stable forces in Ireland, and their reluctance to create a union spells even greater misfortune for their own clouded future. The noble Lord Marke (Rufus Sewell) comes close to creating that union, but his treaty leaves his tribesman questioning the motive (does he want peace, or only to lead?). By the time it is brought to the floor for consideration, too much of a window is left open; the gathering of tribe authorities is quickly invaded by the Irish right before signatures are penned, and blood is shed in mass amounts.

The screenplay borrows a lot of its rhetoric from the convictions of a standard romance/tragedy, many of which are essentially derived from Shakespeare’s most famous of romantic tragedies. In all cases, the feud between two factions always overpowers the passion of two bystanders; they revel in their moment, but moments are intended to only last briefly, not a lifetime. Because the world does not intend them to spend the rest of their lives together, it is therefore a duty of modern retellings to capture that specific moment in a fascinating and/or convincing light. As the emotionally challenged leads, both Franco and Myles seem far too aware of their fate early on; the air of their foreknowledge follows them through the movie so consistently and abundantly that they never are able to relax in the roles. As such, their sense of passion only goes so far; it seems despondent at times and physically forced at others, and once their lives require them to put other deeds in the forefront and abandon the lust, no one in the audience is either surprised or saddened.

Other than being rather generic in terms of the passion, the whole situation also reeks of the unbelievable. Tristan would no doubt be a heartthrob in modern times (in his own right, James Franco has already achieved such status), but stacked against someone like Rufus Sewell’s Lord Marke – a man who does everything in his power in order to get the tribes united – what sensible woman is going to choose him? Why go for the conflicted and often frustrated young one when you can have the older and more mature guy who manages to conquer all and yet remain a very good-natured person? Then again, the argument can be made that Isolde, a persona created from the same mold of naïve and half-witted romantic heroines that has fueled this genre for centuries, is not necessarily the type to be thinking very deeply about things like that in the first place.

Is the picture totally without merit? Not really. As much as it surprises me to admit it, “Tristan & Isolde” is probably one of the best-looking costume dramas in recent times: clear and concise in its style, etched by layers of beautiful visuals that might, in a much better film, be a lot more valued (the wedding scene between Isolde and Lord Marke that shifts the movie’s narrative gears is probably the most striking nuptial ceremony I have seen in a movie of this nature since John Boorman’s “Excalibur”). Furthermore, you can even argue that the movie might have been highly entertaining if it had completely abandoned the lovers and focused solely on the Irish British conflict. Here lies a spark that could have legitimately challenged the viewers, as the hierarchy from the two national competitors exchange barbs and plot sinister acts against one another that reek of untapped intrigue. What are we left with at the center, though? A love story that, alas, engages on such a superficial and implausible level that no one shares interest in the passion beyond the site of two pearl bodies hitting the sheets. Tristan and Isolde are what we call infatuated lovers rather than legitimate soul-mates; theirs is a story that loses energy as soon as the clothes go back on.