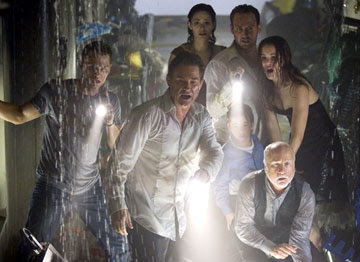 Not that he, or anyone else for that matter, would be able to spare such time. The players in this remake of the famous disaster epic barely have the instance to introduce themselves or establish relationships, at least beyond a few lines of casual conversation that become background amongst all sorts of party-going action. They drink, they laugh, they bluff at the gambling table and make off with one another’s hard earned money… and then in the next moment are being flung from one end of the ship to the next as an enormous wave turns the sea-liner completely upside down. In the following instant, in between all sorts of panic-stricken survivors screaming and pleading for answers and help, a small faction of individuals decide to take matters into their own hands and escape the disaster by climbing to the top (now the bottom) of the ship and wait for help to arrive.

Heard it all before? Of course you have. But as is true with any remake of any film, you’re not here for enduring the repetitive details of a plotline that can be recited in your sleep. Now the question remains, why then are we here watching a remake of “Poseidon”? The filmmakers seem to be searching for an answer throughout the running time, but really never come up with one. Actually, their biggest problem may lie in the fact that they only have 99 minutes to make their point; whereas the first “Poseidon” film saw no qualm in taking the time it needed to develop essential cinematic functions, the new one is so brief, so abrupt and so pedestrian in its pacing that it’s like watching the original in fast-forward. If by current film standards it is better to assault a viewer’s senses with a sped-through disaster rather than played out and thought-provoking one, then director Wolfgang Petersen has succeeded in his goal. His success, however, is nothing more than another tedious example of the lack of inspiration Hollywood has developed in keeping intelligent moviegoers intrigued beyond a few quick flashes of high-cost visual effects.

The movie opens, we gather, in the present day. Robert Ramsey (Kurt Russell), former Mayor of New York City, is cruising the seas aboard the luxurious Poseidon with his daughter, Jennifer (Emmy Rossum), and her boyfriend, Christian (Mike Vogel), whom treads nervously around the protective father as if a rodent being watched by a serpent. The ship is big and spacious – so much so that you wonder why certain characters continue to run into each other so frequently – and certain inhabitants, like the smooth-talking Dylan (Josh Lucas), match that physical attribute with the massive sizes of their egos. Others, like the lonely and broken-hearted Richard Nelson (Richard Dreyfuss), would almost melt into the background if not for the fact that such a notable Hollywood face is portraying them. What brings them together, however, is not so much the celebration of a New Year as much as it is the tragedy that follows – mere minutes after the clock strikes midnight and the ship fills with cheers, a massive wave on the open sea rushes towards the ship and completely capsizes it, throwing around inhabitants like objects and trapping them in an enclosed space that may be hours or minutes away from invasive ocean waters. The movie doesn’t waste time with unleashing the conflict, either; we get a brief 15-minute tour of the setting, some rather brief character introductions, and then it happens. Abrupt? Very. But not nearly as abrupt, perhaps, as what follows: once the situation is assessed and a select faction of victims decides to flee instead of wait for help to arrive (if it ever does), they travel from room to room, pondering escape routes and hazards, thinking of ways to get from point A to point B without putting too many lives in danger but with enough urgency so that they can make it out alive before the boat decides to go belly-up (figuratively speaking).

And that idea follows through so incessantly on celluloid that there’s no time for anyone to ponder what may or may not happen. It is a very “live-for-the-moment” type of movie, minus all trace of enthusiasm – not only does it lack the intelligence to stress certain characteristics or ideas, but also the very basic incentive. Everything happens on screen just because that’s the way the script wants it, and at no point does anyone from the interior try to stray from the formula. They’re all dialogue readers. One could, of course, use the argument that disaster films aren’t as much about characters as they are about situations, but why bother? “Poseidon” dwells so hopelessly on the notion of narrative redundancy that it would have to depend on other means of support in order to work. Needless to say, it finds no reason to be that courageous with the material.

Positives? The opening sequence, a long expansive swooping camera shot that speeds past the upper decks of the ship, tilts towards onlookers and then finally settles on a jogger on the top level, is a marvel of camerawork: skilled and elaborate, so seamless that you aren’t sure what parts of the Poseidon are the illusion and what is the reality. And what of that spectacular sequence in which the ocean wave completely transforms the spectacular Poseidon into a scene of utter catastrophe? We’re talking special effects that, yes, are as seemingly authentic as those on display in James Cameron’s “Titanic.” Why, then, does the movie make such a big issue of throwing all of this at us in such a short amount of time? I dunno. It’s not as if the movie would have been bogged down by an additional 10 or 20 minutes of footage – time that could be best spent developing characters, understanding their relationships and their individual intuitions, and providing more detailed explanations of why they choose to make one decision over another. As is, we get all of this on a thin surface that is so glossed over that it blinds us to necessary details. A better remake might have asked, “What can we do to improve on the first film?”, but here we get the impression that the only thing on the minds of these filmmakers is how well they can polish up a turd before throwing it at unsuspecting audiences.