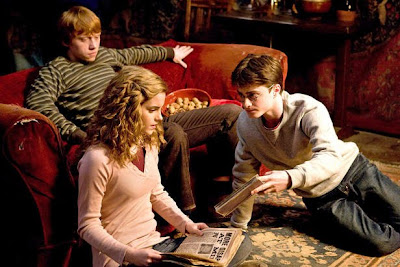 The Harry Potter of yesteryear is but a distant memory. Gone are the light-hearted dining conversations between young witches and wizards and magic lessons from ambitious Hogwarts professors, and in their place exists the foreboding, fateful realization that nothing stays the same and things can only get bleaker before they are resolved. Directed by David Yates, the talented Brit who gave J.K. Rowling’s heroes and villains a sense of cinematic importance in the series’ last installment, here is a movie beyond the concept of being in awe of its special effects or weighed by its plot twists; what he has done is stripped this franchise of all its prerequisites and devised something more meditative, more dramatic and more touching one might anticipate. This is a movie that steps far outside of the comfort zone and becomes an enthralling and fully-realized gothic fantasy.

What’s more, the movie accomplishes all of this using less-than-hopeful source material. Of all the books in the series, “Harry Potter and the Half-Blood Prince” is both the most uneventful and difficult book to wade through, primarily because it revolves almost entirely around exposition and behavioral situations rather than narrative movement. Then again, perhaps the director and his writer saw this characteristic as a chance to emphasize rudiments that are ordinarily slighted in other movies – if you make a Potter film with minimal story and action, maybe you are also making something much more challenging and thoughtful in the process.

The movie begins with an ominous tone, as Harry (Daniel Radcliffe) is dragged away from the confinements of the Muggle world by Albus Dumbledore (Michael Gambon), the aging headmaster of Hogwarts. They make many trips together throughout the course of the movie, but the first is perhaps the most important: traveling to a secluded alley somewhere in London, they arrive at the home of one Horace Slughorn (Jim Broadbent), whom Dumbledore encourages to return to teaching at Hogwarts after a lengthy absence. There are various reasons for the proposition, chief among them being that Slughorn may or may not hold an important key into uncovering the dark, unwritten history behind the power of one Lord Voldemort.

Much of the movie revolves around creating a profile on Lord Voldemort, namely in the form of Dumbledore and Potter investigating his history and revisiting memories revolved around his upbringing in order to better understand how to defeat him. Dumbledore provides routine outings for Harry using his dependable pensieve (a dish filled with water that can turn a liquid memory into a fully-fleshed out action for its observer) as the conduit, and the memories themselves are strategically extracted from dependable sources from Voldemort’s past, including his favorite former teacher Slughorn. Definitely more resonating than even the exhilarating thrills of a Quiddich game, the pensieve has effectively become the most memorable of wizard inventions in Rowling’s world, perhaps because it has unyielding candor and is capable of revealing very dangerous secrets. And in a world this well-drawn, secrets do more than change the course of a story, they leave behind echoes.

Meanwhile, Harry and his friends find themselves entering their sixth of seven years at Hogwarts in “Half-Blood Prince,” at an age when puberty begins to take over and provide its own unique set of challenges. No longer are students looking at each other with innocent and adventurous eyes, but rather with sly smiles and flirtatious demeanors. Particularly noteworthy are the subtle exchanges made between Hermione Granger (Emma Watson) and Ron Weasley (Rupert Grint), both of whom tiptoe around one another as if still caught in the groove of their youth, oblivious to every gesture and movement, as if they are the only ones in the room whom can’t acknowledge that there’s a magnetism between them. Not as obvious, on the flip side, is Harry’s subtle interaction with Ginny Weasley (Bonnie Wright), who expresses interest in Potter but seems more interested in holding him just behind the line, as if to suggest that their time is not yet at hand.

What this all leads to is a climax that is every bit as heart-wrenching as it is ambitious, as we watch the pair of teacher and headmaster unearth menacing truths, make difficult realizations and face great peril in their attempts to understand the make-up of their greatest antagonist and combat it in a way that strengthens their standing against his ongoing uprising. That the movie does this with such an emotional thrust only deepens its effect; in watching both of them build a certain unique camaraderie as they delve further into their ongoing mystery, we feel much more than fear for them as they cross into menacing territory. And in a crucial moment towards the end, we find ourselves even choking back emotion when it becomes painfully apparent that one has to remain helpless to the other in order for the fight to continue.

Slowly but surely the movies have found a way into the fabric of their source material, and “Harry Potter and the Half-Blood Prince” exists as a reminder that, at long last, the franchise has hit its stride on screen. I was not one of the legions of admirers of early Potter installments, namely the ones helmed by Chris Columbus and Alfonso Cuaron. They simply were not apt choices as directors for this story, perhaps because a literary series this deeply saturated by its own ornate culture required someone more familiar with it, namely a British voice. Hence why Mike Newell and Yates, both of whom are from the British Isles, have made the best of the Potter films, and will no doubt continue to do so as the series prepares for its final curtain. There is a brief moment in the beginning of the film in which Harry stares at ambitious photographers, paralyzed with gloom until Dumbledore ushers him out of sight. The scene has no dialogue, no gloss and no ambitious special effect to speak of, a remarkable feat for a franchise that is thus far heavily saturated in impressive visuals and cinematography. Watching it, you get the sense that someone behind the camera now realizes how much more stirring the human element of the story is instead of the exterior presentation.

Produced by David Barron, David Heyman, Tim Lewis and Lionel Wigram; Directed by David Yates; Written by Steve Kloves; based on the novel “Harry Potter and the Half-Blood Prince” by J.K. Rowling