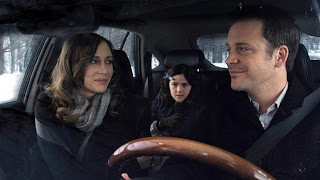 A moment of distress sets in during the early stages of Jaume Collet-Serra’s “Orphan,” in a dream sequence that features a mother-to-be strapped to an operating table as her newborn, said to have died in the womb, is savagely vacuumed out of her uterus and half of its remains are handed to her in a blanket. This sequence, we learn, is an offense of repetitive nature, to be replicated at several sequential periods of the movie when characters indulge in arson, threatening the lives of others, animal abuse, the murder of nuns, sabotaging marriages, throwing school bullies off playground equipment, suffocating kids who have spinal injuries and countless other questionable acts. For 123 minutes, we find ourselves at the mercy of a story that treats all of this to not just crude and shocking proportions, but also to points that showcase obvious lapses in moral judgment and taste. Such qualities seem to be mere technicalities in an age of horror when boundaries no longer are in view, and here is a movie that makes full use of its ability to strategize the harshest, most macabre manifestations seen in any recent film plot.

But to what purpose? Mere words fail me in my attempt to decipher the goal of “Orphan,” which is an angry, bitter and abhorrent display of masochism masquerading around as a legitimate horror film. To even refer to it as a scary movie insults the very nature of the word; in claiming to fall under that header, it ignores the formula of a successful horror film by being neither horrific nor effective to substantial mental or physical purpose. It is simply an endless display of nihilistic intentions, and the fact that it dares to be so calculated with its screenplay only makes it all the more despicable. This is not a movie that is merely bad because it lacks brain or simple competence. It knows precisely what it is doing, and it doesn’t care what anyone – least of all sane, decent human beings – might say about it.

The plot deals with Kate and John Coleman (Vera Farmiga and Peter Sarsgaard), a married couple grieving over the sudden and unexpected loss of their daughter Jessica, who has died in childbirth before the movie begins. Encouraged by a family psychologist to apply the love they felt for that little girl towards something productive, they seek to adopt a needy child in order to satisfy their craving to care for someone new – and in this case, their choice comes in the form of a Russian 9-year-old.

Meet Esther (Isabelle Fuhrman), a bright and articulate young lady whose infectious charm and seemingly bubbling personality not only win the approval of her would-be adoptive parents, but also that of their youngest daughter Max (Aryana Engineer), who has desired a sister ever since her biological one passed. Poor young Daniel (Jimmy Bennett), however, is not so easily fooled; instantly he sees his new sister both as a rival for his parents’ affections as well as a nuisance to all those around her. And maybe he is right – maybe that gimmicky lady-like school wardrobe and those ever-so-cumbersome mannerisms are the work of someone who is more than just out of her element. Perhaps there is a darker side that no one is seeing.

The key to the movie’s decisive narrative failure is that it places these realizations in characters who are either too vulnerable to challenge, or too stupid to know how. The result: a never-ending antagonistic exercise in vulgarity and viciousness, played unconvincingly and over-the-top by actors who seem unaware of their predicament, and written with the skill of a snuff film. That the movie even dares to enjoy these sentiments suggests something alarming about its creators, but further dread sets in when audiences actually start responding to them. Consider, for a moment, a scene in which Esther is spied leaving a tree house by her brother, and she confronts him unsuspectingly in his room that night with a razor blade to his throat. “If you speak of any of this,” she insists, “I’ll cut your pecker off before you know what it’s for.” The screening I attended saw half of its audience force out a cold chuckle when Daniel urinates out of fear of this incident. Seriously, what the hell were they laughing at?

Hitchcock once said that a good thriller will play its audience like a piano. If that logic remains in play today, then “Orphan” plays us like Russian Roulette. And I don’t merely make that comparison because the film has the nerve to utilize it in a repulsive scene in which a loaded gun is pointed at the forehead of a little girl, either. No, the analogy comes as a result of the movie’s awkward sense of tone: a shapeless shifting between heartfelt family moments to ruthless displays of macabre that leave audience members feeling like their hearts are being stomped on. That is not to say the movie even has a heart of its own to stomp on either, and to insinuate such would be to give it credit that is unfathomable. The screenplay by David Johnson isn’t even skilled enough to offer basic structure to its developing conflict. More often than not, things play out on screen not as if they are part of a natural progression, but more like jarring circumstances tossed into a repetitive rhythm. By the time the movie bothers with climax, it is too deluded by its own warped sentiments to even deliver a passable one. The twist is nothing more than a shameless cop-out, a ploy to get audiences to see all prior material in a light with different shades of relevance.

But of course, by then, it’s a wonder that anyone cares. Jaume Collet-Serra, who also directed the 2005 remake of “House of Wax,” seems to be obsessed with exhausting his audiences through an excessive use of visual and verbal atrocity, and refusing to utilize either trait with a hint of simple tact. That the film also features 13 different producers on its credits underscores a fundamental flaw of justice in the cinema – when the fate of something questionable is being decided by more than a cluster of moviemakers, chances are too many differing feelings will result in the “let the audience decide” mentality. Here is an audience that should not have been subjected to it in the first place.

I still struggle for a resolution as to why a reputable studio like Warner Bros. is so willing to showcase this trash in a respectable theater. Are they really worried about their summer box office intake, especially when Harry Potter is back on screen? Did someone behind the scenes genuinely think of this project as promising? I found myself reminded of two of the movie’s closest cousins – “The Omen” and “The Good Son” – for a good duration of the running time. In its utilization of the “bad-children-go-nutso” theory, the movie leaves behind the persuasive, bone-chilling essence of its superiors and exchanges that for pure and utter repugnance. At least a bad movie like “The Good Son” was at least deluded enough to think of itself as respectable. “Orphan” is self-aware of its atrocity and arrogant about it, and I am ashamed to admit that I even wasted the time to volunteer two hours of my life to witness it unfold in all its repulsive grandeur.

This review sucks. No drawn out, long winded reason why, but this movie was great.

You suck at reviewing. Don't quit your day job.