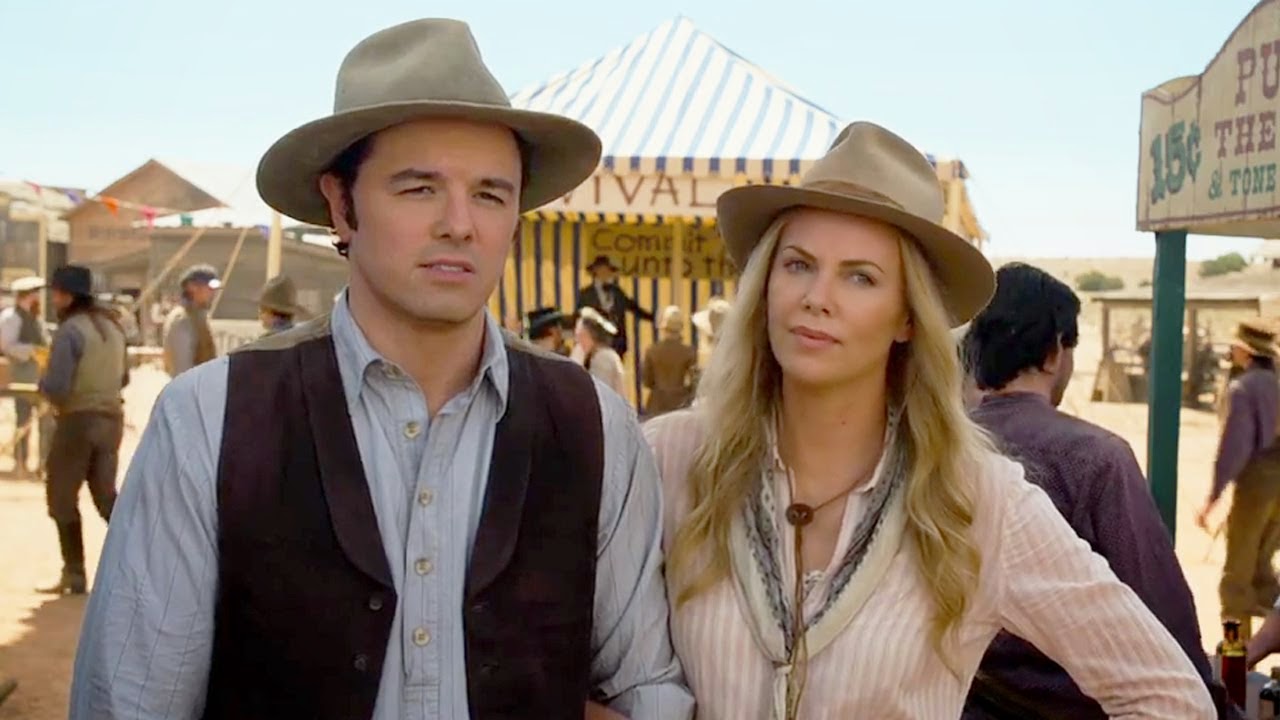 The shotgun approach of movie comedy is not something many exercise with self-assurance; when the attempts are obvious that a writer or director will do anything in their power to acquire a laugh, the prospects at actually finding a punchline are thin, and often overburdened by an underlying arrogance in the material. MacFarlane, at least, identifies enough with his audience to remain true to the intentions of humorous situations, and through much of his latest endeavor there is the sense that he genuinely finds the material uproarious. Some jokes -- including a running gag about Christian values in a relationship that contains a hooker – even warrant some very ambitious chuckles. But these are momentary puns probably better suited for late night television; in a full-length cinematic feature, they are worn thin, and the material in between tries so incessantly to win over its audience that it sputters out long before the final act, and by then even the actors look like they are ready to toss aside their prop pistols in exhaustive frustration.

MacFarlane, also the film’s director and principal writer, stars here as a simple-minded sheep farmer named Albert, who in the opening scenes makes a half-hearted attempt to reason with an angered guy during a stand-off in the center of town. The initial conflict: several of his sheep wandered onto the property of a neighbor and destroyed his crops, and the victim seeks either vengeance or compensation. Alas, Albert’s desire to avoid dueling pistols also turns off his bored girlfriend Louise (Amanda Seyfried), and she ends their relationship after that all-too-familiar break-up speech about “working on oneself” is delivered in calculated fashion. What she doesn’t reveal at the time, however, is that she’s actually fond of a wealthy guy in town named Foy (Neil Patrick Harris), who runs a shop for exotic treatment shampoos and lotions for those growing fancy mustaches. This reality inspires a competitive edge in Albert, who is clearly out of his league against such a distinguished type, but is fully candid about his inability to function in the dangerous old west without such a beautiful woman at his side; to him, she is the only possible happiness in an era where death literally lurks under every footstep.

The movie supplies him with friends and foes that have their own predicaments. Edward (Giovanni Ribisi) is a shy but alert sort who is in love with a prostitute named Ruth (Sarah Silverman), and in one early scene he sits uncomfortably in the brothel lobby, holding flowers while he waits for her to finish a loud sexual encounter in the upstairs bedroom. Then there is Anna (Charlize Theron), a stranger from out of town who has arrived with a menacing brother named Lewis (Evan Jones), and when she is saved in a bar fight by Albert, she begins taking a liking to the simple and kind sheep farmer who is so unsure of himself. Why so impressed by someone unsophisticated, however? Because she is, unbeknownst to him and all others, the unhappy wife of an outlaw named Clinch (Liam Neeson), whose notoriety as the “fastest gunman” in the old west suggests hidden power in word-of-mouth advertising during an era without newspaper distribution.

Two conflicts weave through the screenplay: 1) every interaction between characters and their daily observations usually culminates in a punchline about how easy it is for people to die in the old west, or an actual display of death itself; and 2) the crosshairs of fate stare down at Albert as he gets closer to Anna as her jealous and cutthroat husband wanders into the picture, unaware of what his little wife has been up to in his absence. As launching points for the movie’s heavy supply of sight gags, the plot is little more than a handlebar for all the actors to hold onto as the jokes whisk by them in rapid succession. Sometimes, I even laughed; aside from the several humorous sexual jokes between Silverman and Ribisi, there is a howler of a scene involving a delivery of ice, and another where the MacFarlane character interacts with a tribe of Indians, which inspires a wonderful hallucination sequence. But at a lengthy 116 minutes, what does four or five solid jokes and various minor cracks amount to? A stretch of time that is as endless as it is uneven. Contrast this to “Ted,” a movie about an obscene teddy bear brought to life from a child’s wish; in that film, the characters are not brow-beaten by absurdist anecdotes but rather are the facilitators of them, bringing humor to their situations through dialogue that is pointed, and situations that are biological to their routines. “A Million Ways to Die in the West,” on the other hand, sticks out like a loud showgirl among skilled musicians. It forces characters into situations that are silly without reason, and expects the premise to substantiate a lot of bizarre twists that seem to exist out of total conceit.

Yet all good comedy does, in the end, come down to whether the material simply makes you laugh at all, and for some this is the kind of movie that will do just that in some acceptable doses. Some of the gags are absurdly delightful, while others aim for the lowest common denominator in toilet-fueled humor. Is that enough for passable amusement? For the average moviegoer experiencing a recent dry patch of effective comedies at the theater, I suspect so. But for the MacFarlane enthusiasts, who are well-versed in the randomized but insightful antics of his long-running cartoon sitcoms, this all might play just like a momentary distraction in a career that is far beyond the standard of its drowsy material. The old west may indeed be full of all sorts of dangers waiting to leap out and kill you, but for some of those unlucky casualties, one suspects they would have preferred much more exciting deaths.

Comedy (US); 2014; Rated R for strong crude and sexual content, language throughout, some violence and drug material; Running Time: 116 Minutes