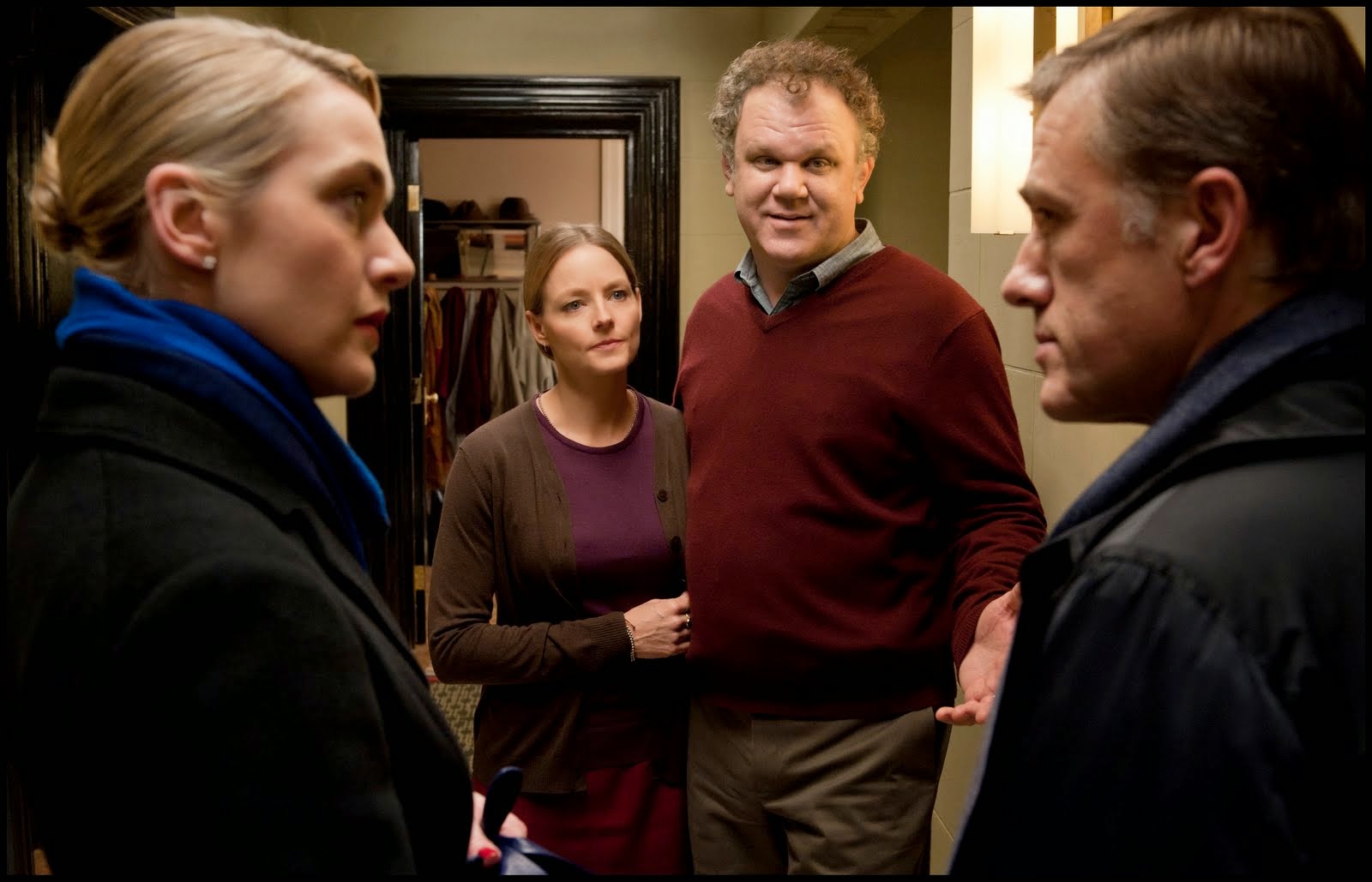 The film wastes no time in arriving at its destination. In a brief and distant opening shot, the events in question transpire with vagueness, revealing only enough to stir the audience’s intrigue. In the next scene, four figures loom over a laptop preparing a statement about what exactly transpired during that unfortunate moment when a kid was injured by the carelessly violent actions of another, and they respectfully call each other out over details (was the other boy “armed” with a stick, or just “carrying” one?). The couplings are instantly distinguishable: the Longstreets (Jodie Foster and John C. Reilly), as the parents of the victim, dance cordially around threatening insinuations, while the Cowans (Kate Winslet and Christoph Waltz), parents of the offender, feign sympathetic gestures as a way of restricting access to their true feelings on the subject. The Longstreets invite the Cowans into their home as a way of peacefully settling the dispute that has transpired between their sons, but colorful dialogue suggests almost immediately that their kindness is a front for incensed temperaments. And as the scenes churn along, each stacked with artificial formality, their patient words eventually give way to a steady supply of rough analogies and wounding observations.

They smile, exchange anecdotes about parenting, and undercut one another with veiled judgments. They share coffee, cobbler and whiskey, in that order. Each passage of interactions is interrupted by an attempt on the Cowans part to leave the scene, but curiosity in new details (and pride during heated exchanges) continuously pulls them back to the scene of an impending disaster, all while the discussions become more aggressive until they devolve into downright hostility. Penelope (Foster), the self-appointed peacekeeper of the gathering, intercuts a worldly and mannered demeanor with passive aggressive statements. Nancy (Winslet) empathizes with the situation and wants to find resolution, but is ultimately unraveled by the insincerity of her hosts. Alan (Waltz) observes most things with unflinching honesty, but is distracted time and again by a work cellphone that refuses to stop ringing. And Michael (Reilly), brought to total discomfort by the phony demeanors of his visitors as well as his wife, eventually has no qualms in sharing exactly what is on his mind, regardless of the incredulity it may inspire.

The screenplay, adapted from the stage play “God of Carnage” and penned by both Polanski and the talented Yasmina Reza, understands the nature of its premise so sharply that it never wavers from portraying the four leads from a place of disquieting clarity. There are moments so observant that even the performances seem to hover above the corrosive actions. That is not surprising in the least, of course, given the natural chemistry that comes with using such distinguished actors; Winslet and Foster – and to a lesser degree, Waltz and Reilly – do not simply read dialogue or recite sound bites with heated passion, and under Polanski’s passionate thumb you get the sense that their scenes were shot dozens of times in order to reduce them all to their core instincts. Less obvious, but no less amusing, is the way the script so effortlessly transitions from couples to genders for the sake of competitive banter, and there is a priceless scene towards the end where the two females, exhausted by their egotistical husbands, humorously bond (if only briefly) over the unfortunate loss of Alan’s overworked Blackberry phone.

The style recalls a lost art in the filmmaking process. It supplies us with the urgent real-time approach of a stage play, confining its characters in a single apartment that serves as a prison impossible to wander far from – and when anyone tries to, the dialogue is like a magnet pulling them all back for more verbal showdowns. Such dynamics were big in the golden age under the watchful eye of Alfred Hitchcock (whose own “Lifeboat” and “Rope” were founded on that principal), and eventually it produced two of the best films of the 60s: “12 Angry Men,” about a jury arguing over the fate of a young man accused of murder, and “Whose Afraid of Virginia Wolf?”, where Elizabeth Taylor and Richard Burton exchange painful but pointed witticisms in order to undermine already-unstable psyches. Why did any film go the route of echoing the atmosphere of the stage in the first place? Because the urgency of a story where the most important details occur in a short span of time required those isolated spaces in order to magnify the emotions. To see it at use in “Carnage” is to witness the revival of a practice of treasured power. This is a movie that would not work if the camera were allowed to break from the action and wander elsewhere; to see it all through, we must remain vigilant at the sides of these people, united by intrigue as the immediacy of feelings overwhelm all the details.

On the other hand, the end of the movie feels like an abandonment of principals; rather than seeing the characters all the way through in their present predicament, it opts to pan back at a stalled moment and return, at a distance, to the scene of the crime, where we observe the two teens reach their own quickened resolution without the need for parental interference. The point is sound, but the method is not; after prolonging the engagement of the four heated parental figures, it is unfair to abandon them so easily. Their discussions are cut abruptly and unwisely just when we expect another round, and the movie avoids the possibility of them finding any point of an outcome – a thoroughly unwise decision, I feel, that prevents a high aiming movie from achieving that sense of perfection it so closely comes to discovering. It does, however, discover this much: when a screenplay is so thoroughly impassioned by its material, time can indeed seem like a pointless measurement. “Carnage” is as brief as human stories come, but the details are so insightfully absorbing that I could have easily sunk back into a nearby chair and listened to these characters bicker for days.