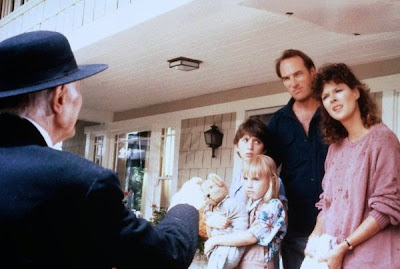 That nagging quality informs the bulk of “Poltergeist II: The Other Side,” a very inferior follow-up to a wonderful supernatural thriller that remains, to this day, a timeless example of the possibilities of thrills in cinema. There are traces of such potential that litter the bulk of this movie, but a good portion of those setups are thwarted by the individual responses of characters who act as if they’ve never been caught in a supernatural quandary before. That, of course, says more about the nature of the screenwriters than it does the characters. Did Michael Grais, who also authored the script of the original film, understand enough about people to sense that they must evolve from experiences rather than regress into screaming figures on a menacing canvas? As we watch on through this material, our eyes are disheartened beyond belief by the realization that people we have come to admire can be relegated to prototypes for every traditional hack-and-slash horror picture of that time period. Watching them lumber around without regard to their individual strength negates many of the points the movie hopes to achieve, several of which are rooted in fascinating foundations.

The story takes place a year following the events of the first picture. The Freelings are now living with a grandmother who has given them shelter, and those scarred from the experience of those horrific encounters now seem to be returning to some semblance of normal livelihood. Of course, the movie implicates prior horrors with subtle details, such as the notion that the family no longer owns a television set. And when the kind, loving grandmother spies young Carol Anne (Heather O’Rourke) drift off into a trance-like routine of drawing disturbing figures on construction paper, it fuels a critical realization that she, yes, is a young clairvoyant following in the footsteps of two generations of psychic women. The grandmother has always embraced that quality, but poor Diane (Jobeth Williams) rejects it out of fear, mostly because it provides windows into discoveries she is not ready to deal with. You can just imagine how gravely she worries about her daughter possessing such abilities, especially if she remains in the crosshairs of spirits who still seek her youthful wholesomeness.

The grandmother ultimately dies in the early part of the story, and her death seems to release a wall of protection around the Freelings. At a shopping mall, Carol Anne becomes disoriented and meets an imposing figure named Reverend Kane (Julian Beck), who takes a liking to her that is almost predatory. She, needless to say, suspects something in him that is all too familiar, and as the realization of his identity begins to reach vivid clarity, the family is once again thrown into a storm of encounters with angry ghosts that seek to unravel their safety. The motive remains the same: Carol Anne remains a life force they are drawn to, and want to snatch her away from this plane of existence in order to direct them towards the light in another. Many of these continued attempts – each a succession of dynamic scenarios with increasing suspense – occur just as the medium Tangina (Zelda Rubinstein) goes digging underneath the site of their old house, and discovers a burial ground with its own horrific secrets that will ultimately shed light on the identity of the poltergeists.

The crux of this backstory is that the spirits are guided by a beastly figure that lead them to death in this life for religious reasons, and his release from the physical world has done nothing to curb his thirst for mischief. That beast, inevitably, is the form of the menacing Reverend Kane, who wanders freely among the human dimension for one specific purpose: to undermine the certainty of the family’s strength, and taunt young Carol Anne from a distance while her parents argue about what the best course of action is: flee the house, or remain while the native Taylor (Sampson) attempts to fill their space with good energy to counteract it. In some regards, Taylor’s influence works; in others, it only delays the inevitable. The spiritual angle of this conflict could have provided the story with more of a fascinating angle, but alas the screenplay uses it for visual ploys that feel like outtakes from “Maximum Overdrive.” When a poltergeist attacks the family, they often do it through electronic devices – flickering lights, toys, and even a chainsaw. And given the almost meditative and ethereal nature of the spirits in the first movie, their actions here seem almost like sensationalized cop-outs.

If anything, “Poltergeist II” (and to a more extreme degree, “Poltergeist III”) remain odd footnotes for more than just what we view on the screen. Behind the scenes, something foreboding seemed to drive the fates of the trilogy’s actors, many of whom were working on a set in which technical artists used real human corpses instead of mannequins in those scenes that required them. Following the release of the first picture, actress Dominique Dunne (who played the oldest daughter) was murdered by her boyfriend. During the making of this picture, Julian Beck lost his battle with stomach cancer. Will Sampson, the observant native (who also performed an exorcism on set in between takes), died on an operating table during an organ transplant just a year after. And right before the release of the third picture, young Heather O’Rourke perished following a misdiagnosed bowel obstruction, which resulted in septic shock. Collectively, these tragedies have provided the groundwork to what most consider the “Poltergeist Curse,” which suggests that those involved in the making of such films were marred by some unseen force that sought to punish them. As we inspect these sequels, that realization adds a duel layer of recognition to how the faces behave. It is clear no one on screen here is having fun with the material, and the sullen awareness that they are making a movie in the wake of one tragedy (and in the impending notion of another) fills the performances with a certain eerie quality, as if the ensemble fearfully waits for something worse than just an elaborate special effect to sneak up on them.

In some respects, “Poltergeist II” is not without its merits. As a narrative, it follows the lives of its players from an angle of believable progression, and puts them into situations that, if handled with the right context, could have manifested into rather rousing scares. Many of the special effects are quite good for their time, too (the great H.R. Giger, in fact, designed the best of these sequences, involving a tequila worm that evolves into a menacing skeletal beast). And the late Julian Beck, so clearly in his final days, is utterly haunting in his performance as a menacing figure that snarls behind sunken eyes and emaciated features. But so much of this is sidelined for more dubious screenplay choices. The film drifts through the material with a sleepy focus that diminishes the power of the tension, and brings it all together in a final climax so utterly preposterous and cheesy that we howl out in protest. As far as the trend of follow-ups go, here is a film that offers a few shining moments of inspiration and then does exactly what the audience expects it to: throws it all away in a mad dash of conventional (and often boring) exchanges between characters that undercut the strength of their personalities and the purpose of their struggles. But I guess after spending two years fighting off the endeavors of a bunch of ghostly bullies, everyone is entitled to a little exhaustion.

*Footnote: “Poltergeist II” had been trimmed of nearly 50 minutes of footage prior to theatrical release, indicating one of two things: 1) either the longer result was much more problematic than what remains; or 2) the vision of the director conflicted with the desires of the studio, who ordered the edits. In either case, a mediocre movie with so much scrapped footage is a case in point for the existence of Director’s Cuts. Though Brian Gibson is now deceased, the studio would have nothing to lose if it were to eventually reassemble the footage for a lengthier release. On the day that occurs, here is a movie that will at least be worth an eager revisit.