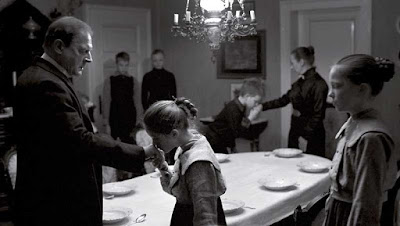 “The White Ribbon” is about the underlying psychology of people without answers, who respond to the tragic mysteries not with wonder but with fanatical acknowledgment, and insist that it all must occur as a consequence of the wild and unrelenting sin buried within youth. Theirs is an existence that creates an immediate assertion of guilt: for basic wrong-doing, for disobedience, and for occupying space in a world that considers them the first source of discord. And for each of the children who practically sleepwalk through the village’s open streets, every conscious moment is one of fear and resentment, revealed in faces that seem to interlace their dread with outright resentment even when they bear no responsibility. The cruelest of ironies is that so many are oblivious to the cycle, even when it is called to their attention. There is a scene towards the climax when the Baroness, a headstrong woman who silently rebels against those realities, reveals that she intends to take her young son Sigi out of town and raise him elsewhere. “I don’t want my children growing up in surroundings dominated by malice,” she declares. Should it be a normal emotion for her husband, such a domineering presence, to dismiss her proclamations with basic hostility rather than personal reflection? In that vacuum we know as ambivalence, an uncertain mind is capable of incurring the wrath of ignorance and turning into fuel for lifelong cynicism.

There are additional considerations for many of the ideas present in this remarkable film, but the most transcending quality of “The White Ribbon” is in how it magnetizes our interest through profound degrees of mystery, psychology, dramatic intensity and perceptive dialogue, and then still retains enough power after the closing credits to leave us in thoughtful contemplation of its more cerebral perspectives. In a time when so few movies think that many steps ahead, it is a revelatory achievement for its director, the very discerning Michael Haneke, who sees the material from a place of arcane moral significance. That it absolves the traditions of a modern filmmaking mentality by robbing itself of color and soundtrack cues only goes to emphasize the paralyzing nature of the themes. In the silence of a world where beauty is limited to harsh grayscale and stark contrasts, all we are left with is a story that penetrates to the source of a conflict, and finds a vicious cycle that we all must confront if we are to change it before it plagues the coming generations.

The title refers to a punishment bestowed upon children by the town’s pastor: a ribbon tied to either the hair or arms of children who have been accused of wrongdoing, who must be reminded of their loss of purity. That unsavory gift is made known in one of the earliest sequences, following a verbal lashing that comes as a result of his two oldest children wandering away from town against his authority; the following day, they are brought into a foyer downstairs, where they are each lashed ten times as a sentence before the ribbons are tied in place. Shockingly, his stark treatment of them is but a fragment of a much more alienating thesis: the notion that everyone remains silent in the face of such cruel displays, and their traditions are replicated in a pattern that also degrades women, diminishes passion and excitement, and enforces the pattern as part of God’s unpredictable wrath.

The question is, what God would demand his children to be dealt such harsh penalties for things seemingly out of their control? The same God, apparently, that allows strange events to unfold without foundation, and leave behind unfathomable mysteries in their wake. Haneke, who also wrote the film’s perceptive screenplay, does not meander that point by focusing on the unanswered. While initial twists (particularly the horse accident) are entwined with momentary intrigue, they are simply elaborate ruses to turn our attention towards aspects that are more certain. One of the more blatant realities is the lack of empathy in all but one man present in the scenario: the kind and youthful schoolteacher (Christian Friedel), whose own narration of the events plays like a proclamation of his untarnished purity. In his eyes, that small village is simply a parade of living corpses, many of which are roused to angst when their control of the situation falls beyond their jurisdiction.

Many of the film’s most dramatic moments have an intensity stirred from misplaced cruelty. When the woman in the sawmill dies, her son attempts to avenge her loss by protesting the working conditions imposed by the Baron, and incurs the anger of a father who would rather remain passive about the situation. Following the beating of the Baron’s son, the family responds by firing the governess, who is also the daughter of the deceased (and the only source of income in the family). The doctor, an astute sort who offers little in the way of comfort to his concerned son following his arrival home, carries on an affair with a midwife that clearly idolizes him, and then verbally abuses her in a monologue so harsh that it’s a wonder she retains any composure (although it does inspire a shocking revelation about child molestation). The glue between this arrangement of details is that they are just part of a tolerated routine, roused to the surface because some eyes begin looking deeper as a consequence of the tragedies going on in town. The schoolteacher reads through the specifics as mere disclosures of information, but his participation is indicative of a man who senses danger, and cares about making a difference in the lives of his morose students. Unfortunately, when his suspicions are roused by two children who always seem to be nearby during many of the village’s mysterious tragedies, an accusation he makes is met with threatening vitriol on part of the town pastor. For him (and perhaps all other like him), it is more dangerous to stray from the cycle (however destructive) than to discover the source and cause unnecessary ripples.

Who are these children to become? Haneke believes they are early incarnations of Nazis, who will replicate what has been done to them in a time of war against those they will persecute (is the white ribbon all that different from the armbands that Jews were forced to wear during German occupation of Europe, after all?). Some might find that proclamation a crude and narrow admission, but I think the implication runs far deeper than that. By setting the course of such hostility in such young lives, it does not mean that they are destined to become outright monsters; it only means they are programmed to be easily corrupted by the real ones. In that regard, it isn’t such a stretch to see “The White Ribbon” as a universal parable on the consequences of abusive human treatment. Any child who must grow in the shadows of their menacing parental figures are being taught to live in fear, and when controlled by such an emotion, they are quicker to sacrifice themselves for the sake of something that offers an obverse sensation. For the Germans of the Second World War, that came in the form of a promise of a more prosperous nation, where they could lead productive lives under the protection of an impenetrable military state. It was the most elaborate of illusions. But all such deceptions must begin somewhere, and here is a movie that suspects our most heinous deeds often originate from an age where we absorb the violent tendencies of our parents, and are doomed to repeat them tenfold.