Contention in the Contest: A Final Word on the 2016 Academy Awards 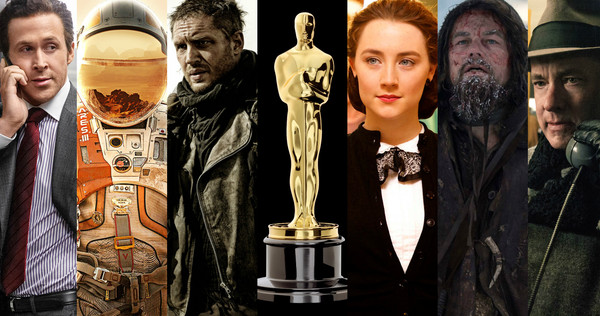 Audiences who descended on the Dolby Theater in Hollywood on Sunday night were certainly expecting active discussion about the diversity issue at the Academy Awards, but when Chris Rock took the stage to open this year’s ceremony, they probably didn’t expect it to be as sharp and insistent as it wound up being. What it also was, even amongst the numerous laughs, was an opportunity for the comedian to use his tongue to spread around the underlying blame of the issue, even to those on his side of the aisle. In one of the night’s most memorable jokes, his aim fell directly on Jada Pinkett-Smith, who lashed out after her husband, Will Smith, wasn’t nominated. “Jada boycotting the Oscars is like me boycotting Rihanna’s panties,” he shot back. “I wasn’t invited!”

That was not a direct indictment against the vocalists of the infamous “Oscars So White” campaign as it was a statement on the often tiresome and repetitious responses to the argument, which usually include impulses that accomplish little beyond seeming petty or trivial. The problem is that the issue is much more persistent and widespread than just that of the Oscar telecast, and as Rock worked his way through a series of punchlines, he seemed to hit the heart of that notion. What does, indeed, a boycott accomplish? “If you don’t show up, then it really is Oscars so White,” Whoopi Goldberg shot back on the red carpet. And thus a great many of the minority voices in the industry made their presence known over the course of a 3 hour award show, offering us reminders that there is much more to the movie talent pool than the endeavors of the mainstream have been willing to suggest in the recent years.

It was also, needless to say, a night of certain shockers and gargantuan upsets – chief among them being the big prize win for “Spotlight,” a movie that many assumed had lost steam in the wake of “The Revenant” building last-minute momentum. While that was perhaps an active thought based on the night’s trajectory – especially as the latter film wound up picking up key Oscars in Acting and Directing – the predominant sentiment that the academy could turn the tides to recognize more socially aware subjects persevered. I was expecting such possibilities, and indeed my correct prediction of 18 of the 24 awards is, above all things, proof positive that this voting body is on track to take bolder risks with its honorees in the coming years.

That is not to imply that “The Revenant,” one of the best films of 2015, was any less deserving of an honor. Far from it, actually. But as many of us in this medium have consistently suggested over time, this is an awards session less about the measure of quality and more about the acknowledgment of key events in film history. While neither it nor “Spotlight” were in any way undeserving, the latter encompasses the kind of subject matter that many will recall in future generations, whereas Inarritu’s film, as visceral as it is, may suffer the fate of erosion. The two primary achievements that will remain key for it are the film’s powerful lead performance and the director’s elevation into the upper tiers of great filmmakers, and both those certainties were framed already by the victories given to DiCaprio and Inarritu, respectively.

Final prizes aside, the biggest of victors on Sunday was George Miller’s “Mad Max: Fury Road,” which nearly swept the technical categories and collected six trophies, including Costume, Makeup and Production Design. Other technical honors were dispersed among “Ex Machina” (which surprisingly won Visual Effects) and “The Revenant,” which collected Cinematography (effectively making Emanuel Lubezski the first man to ever win three consecutive Oscars in that category). While Inarritu’s film finished in second place with three awards, “Spotlight” rounded out the top 3 with two of its own (including Original Screenplay, which had been a sure bet early on in the campaign). And in a moment of swelling emotion, Ennio Morricone, who scored many of Sergio Leone’s spaghetti westerns, won his first Oscar for composing the music to “The Hateful Eight.” At age 87, his long overdue moment was aptly greeted by a standing ovation as he basked in the emotion of the victory.

Aside from the Best Picture upset, two of the night’s other great shockers also belonged in the upper tiers. Sylvester Stallone, the clear choice for Supporting Actor, lost out to Mark Rylance for his performance in “Bridge of Spies,” which effectively reminded us that sentimental favorites are sometimes the most easily offset in these categories (added sidenote: Rylance’s win marks the first time any actor has won an Oscar for starring in a Steven Spielberg film). Lady Gaga, the odds-on favorite to claim victory in Original Song, was tossed aside by a shocking win by Sam Smith, whose Bond theme “Writing’s on the Wall” led him to a bittersweet victory (and in turn provided a rather awkward acceptance speech, in which he acknowledged that he might have been the first openly gay man to win an Academy Award despite an active history indicating otherwise).

While Smith’s on-stage performance of his winning song meandered in the vocal department, Gaga’s piano-driven rendition of “Till it Happens to You” – a so-so song about the rape epidemic on college campuses – showed the singer in a rare state of vulnerability, especially as she was joined on-stage by hand-holding sexual assault victims. That the number was announced by a rare awards show appearance by Vice President Joe Biden certainly added prominence to its arrival, and Gaga’s delivery was much more sincere than the song itself probably deserved. Why did it lose, especially considering that it fell within that golden standard of social hot buttons that the voters love to shower in praise? Two of my assumptions: 1) there was minor controversy caused on Twitter several weeks ago, suggesting that Gaga’s writing credit on the song was a fallacy; and 2) Dianne Warren’s compositions have never been that appealing to voters, because they are either too saccharine or dreary. The latest of her endeavors is certainly no exception, and one can only assume that if less capable performers were to have sung it, we wouldn’t have even been talking about a nomination in the first place.

Of the acting wins, only Rylance’s was startling. Alicia Vikander rightfully won for her stirring performance in “The Danish Girl,” as did Brie Larson for her heartbreaking turn in “Room.” And after a long and exhaustive campaign, Leonardo DiCaprio, a six-time nominee, finally came into possession of an Oscar by winning in the Lead Actor category, effectively cementing his status as one of the more audacious risk-takers of his generation. And if his role in “The Revenant” seemed like the pinnacle of such challenges, then his own acceptance speech, which turned into a call to arms against the epidemic of global warming, fit right in with that sentiment; the audience cheered him on in a manner that reminded us of the influence of the movies, which can be just as effective conduits for changing views as they can be mere entertainments.

In the end, unfortunately, all of these honors felt like secondary impulses in a night that lost sight of celebration, because the politics of the scenario left everyone in a state of unease and discomfort (not to mention misplaced arrogance). Rock did a tremendous job attempting to neutralize such details – and indeed roused some tremendous laughs from the scenario – but they amounted to momentary distractions as the ceremony slogged its way through the muck of its own quandary. And just when the perception of balanced ideals seemed to ease the tension, other offenses were unleashed: namely, a couple of tasteless Asian jokes and an awkward appearance by Stacey Dash, who wandered on stage as a “good will ambassador” to promote diversity (this despite her recent claims on Fox News that Black History Month be abolished). The latter could have been seen as a misfired attempt at cracking an elaborate prank, but the jokes about Asians from both Rock and Sascha Baron Cohen were downright tone-deaf, and rather unsettling given the sensitive nature of the telecast. Inarritu spoke of the importance in recognizing diversity as more than just an issue between whites and blacks, and that call-out is sound: as far as some are eager to come for some semblance of equality, how hypocritical it is of them to partake in perpetuating ridiculous stereotypes about other minorities in the same breath.

If anything positive is to remain in the wake of this contextual mess, it’s the realization that Hollywood, in general, detests being seen in a negative light, and will often partake in movements that will assist in removing negative stigma. Does this possibility offer us all hope that the field with be more fair and balanced next year? It has to. This is a ritual that must adapt with the times, because the industry it represents has no choice in the matter. What we saw that night was a rather mysterious blend of humor, thought and tacky sensibilities, but through the chaos one suspects the gears of new perspective are hard at work. At bare minimum, shaking up the system has to be less boring than trying to pretend that everyone has to smile while there is so much tension in the room.