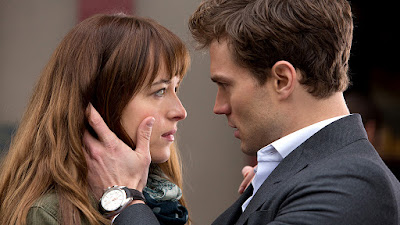 There is something inherently unsettling about a young handsome billionaire that spends all his time thinking about aggressive sexual desires. To witness him come to fruition in the frames of “Fifty Shades of Grey” is to partake in an intriguing case study, in which we become transfixed by the strange dichotomy of an upstanding citizen as he delves into pleasures that are as devious as they are time-consuming.  How does anyone, indeed, come to be so successful and dependable in the business world without taking a break from getting off? Christian Grey, an ego-maniac who lives and works in sterile spaces, doesn’t seem as if he has lived with any other interest beyond the possibility of luring a poor unsuspecting girl into his chamber of dark fetishes. It possesses him so incessantly that there is almost no time for business calls or important meetings – just enough to follow someone around to social jaunts or into secluded areas in order to exude erotic authority. In some strange paradoxical way, the poor subject of these actions finds them endearing, almost romantic. But who in any self-respecting audience is going to share in that perception without feeling uneasy? In a story with a tone this uncertain, Christian plays less like a Casanova with conviction and more like a brute eager to replace Patrick Bateman on the creepy meter.

That women – particularly those of the younger age range – have found this approach dreamy is almost as strange as the idea itself. Under the right guidance, some could have at least turned it all into biting satire (or, perhaps, used it in a good psychological thriller). But as a book and a film, “Fifty Shades of Grey” is orchestrated by people who use the ideas as tools for a generic love story pitch, and one where neither the heroine nor her possessive “dominant” seem experienced enough to comprehend the boundaries of their roles. That allows the endeavor to permeate a hue of misinformation that is almost irritating. Indeed, what are we even here for? Do the writers hope that we will find the concept intriguing, or are they hopeful for a payoff that will allow us to sympathize with the characters while they engage in their bizarre rituals? Less obvious examples of this premise like “Secretary” could at least depend on people who could possess the self-awareness of their own mutilated individualism. Here is a movie so inept at comprehending either meaning that it plays like a cheap exercise of psychological naivety.

Let’s set the scene. Filling in for a sick friend, a college student named Anastasia Steele (Dakota Johnson) wanders into Seattle in order to conduct an interview with an enigmatic businessman (Jamie Dornan) for a college article, and discovers a man who possesses charm, charisma and piercing (if foreboding) eyes. Their encounter is brief and awkward, but a silent magnetism is obvious. Both Johnson and Dornan are good at calling this all to our attention; their exchanges are uneasy and placid, but their facial features transfix into ones of unspoken desire, like lost lovers who have accidentally passed each other in social environments. The perception is clear when Anastasia returns home to Portland and finds herself consistently running into Mr. Grey, who apparently has conveniently wandered into town “for business purposes” (although the movie gives him nothing but opportunities to track down her location, whether it’s at neighborhood bars or hardware stores).

Their time together develops, rather intensely, into a menacing sense of sexual tension. She is inexperienced and inclined to seek romance, but his tastes are more “singular” – namely, he wants Anastasia to be a sex slave that he can possess for several days a week, where she must submit to all his pleasures while receiving nothing in return, other than the satisfaction of making him happy. Most would be obliged to call that a perpetual rape fantasy, but I’ve been instructed by others that these impulses originate from BDSM culture: basically, if you consent to someone who takes on a dominant role in a sexual relationship, the labels change since there is an unspoken consent between the parties involved, however severe. Never mind. I may know very little about the dynamics between a master and his slave, but I know enough about romance and eroticism to know when they are being played for trivial affect. “Fifty Shades of Grey” knows so little about either that they are basically sensational devises used to gain a psychological entry point into the thought processes of the leads, both of whom slog through the routine as if waiting for a sensation that is plausible rather than the mere thrill of the act.

Why do we not buy into this scenario so easily? Let’s establish some ground rules. If you claim to have been in the role of a submissive to an older woman while you were an underage teenager, you are not suddenly an expert in the discussion: you are a victim of sex abuse. Number two: someone who claims to have any level of knowledge in that subject is probably smart enough to only pursue someone who understands the rules (or at least has exemplified some level of experience with them). No contract or written agreement can dictate the emotional involvement of the parties involved. So why does Christian Grey bother going after Anastasia, so clearly kind and gentle and inexperienced? What does he have to gain? Does it stroke his ego and give him power knowing that he is essentially playing with the emotions of an innocent girl? These situations not only make him a bad dominant, but a predatory one. And if there is one surefire way to completely unravel the ruse of sensuality in a movie, it involves putting certain people in roles that have no business being in them, especially if it is to no relevant dramatic purpose.

Then again, it’s hard to wonder exactly how anyone could have made “Fifty Shades of Grey” work even with more grounded personalities driving the material. The sex scenes, sometimes heavy and graphic, are rather insipid; the camera frames them from a place of curiosity rather than arousal, as if curious about what is involved rather than what sensations are possible. The romance itself, meanwhile, is not allowed to develop plausibly, and there are scenes where implications (“No, you can’t fall in love with me!”) are thrown around without a believable reasoning. There is one scene that does work on some humorous level, however; after Christian delivers a contract to Anastasia that discusses the rules of the relationship, there is a negotiation session that is priceless in how it is played with a professional aesthetic. It does, alas, also call to attention the miscalculation of the rest of the material; in a story where these sorts of possibilities exist, why must everyone involved use this subject matter for something so cheap and frivolous?

Inevitably the movie must end with more questions than answers in order to set up sequels. There is a moment when Anastasia, after enduring the torturous possibilities in Mr. Grey’s notorious “red room,” walks away from the situation and leaves her possessor in a situation of moral uncertainty. Some, I suspect, will find a silver lining in that prospect; given the unhealthy distinction of Christian’s unending obsession, a move like this plays like a justice rather than a reveal. But what we are heading to isn’t as certain. Will either character come to recognize their interactions as troubling or revelatory? Do they comprehend the psychology or reasoning? What else is left to discover in the closet of secrets he appears to hold? And is there anything else that the audience is going to be asked to do, other than continue to leave their personal objections suspended in a totally ridiculous narrative? Certainly there is an audience out there for this kind of story, and with any luck neither you nor I will ever have to interact with it.