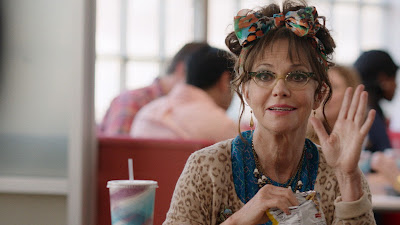 “Hello, My Name is Doris” is a small vehicle, simple and altruistic, but it rises to joyous consistency because Field grips us with her dependable blend of quirks and passion for nearly every frame she occupies space. Would that have been the case if the character had been portrayed by anyone else? That’s doubtful – there is a vivid synchronicity between performer and character here, and as one watches it they are left with the impression that the material was crafted specifically with her in mind. But how could that have been possible, really? Rare is it for fairly obscure comedies to be made with the implication of appealing to one specific actor, unless there had been some prior standing connection between them and the filmmaker (of which I can find no known evidence). You can only imagine how thankful the director, newcomer Michael Showalter, must have been in knowing that he landed her in the starring role; when it comes to being at the helm of an indie comedy, it is easy to have your work get lost in the shuffle of a busy theatrical release schedule unless someone well-known is out there selling it. By all measures, her inclusion provides dual services: 1) it is a fresh example of the dexterity of one of the great living screen personalities; and 2) it reminds the audience of the hidden potential of peripheral films, often lost in a haze at the box office because they aren’t written or directed in the flashy style of the mainstream.

So, too, does the premise instill the basics of a character-driven story arc. Doris is a socially awkward introvert with a routine-driven job behind a desk at a data entry firm, and one can best describe her by the traumas that befell her long before the cameras were rolling; recently deserted by the death of a mother she cared deeply for, she has spent most of her adult life trapped alone, in her childhood home, where fragmented memories are hoarded in the form of countless material possessions. Her lone friend, a kind but sharp-tongued widow named Roz (Tyne Daly), offers her the only solace from that dreary routine: occasional nights of dinner, board games and puzzles, and cheerful conversation about the eccentric lives of youth. As the movie opens, Roz suggests a break from the standard by inviting Doris out to a self-help seminar, where the speaker engages his audience by waxing clichés over generic advice blurbs (some of which are ridiculously funny). But because Doris is essentially a blank canvas devoid of the awareness of clichés or life experience, the words mean something deeply to her – so much so, in fact, that they help to fuel an interest in the object of her silent desires.

His name is John (Max Greenfield), and he is the newly-hired architect of at her company (why they need an architect at all, no one is willing to explain). The two first cross paths in one of the oddest meet-cute setups of recent comedies, but the moment is propelled by the realization that he shows interest in her quirks, and she daydreams about the outcomes of potential encounters (one, involving spilled coffee on a business shirt, inspires one of the movie’s best laughs). Her experience at the self-help seminar only adds weight to those daydreams, rousing her out of the conventional grind to pursue him and his interests. Those prospects lead her through a series of scenes where she dances to electronic music, goes to a concert dressed in random neon street clothes (a move that inspires great admiration in hipster fashionistas) and spends time getting to know John one-on-one. What his intentions are remain unclear until much later, but up to that point there is a morsel of charm that adds distinction to their exchanges, and we take great joy in observing how they all transpire.

Inevitably the plot must toss in monkey wrenches, including one that has Doris attend counseling sessions to ease her hoarding lifestyle, another that turns her into a quasi-Facebook stalker, and another where John pursues his own romantic interests (much to his new work friend’s displeasure). These are not devices used to contrive dramatic conflicts so much as they are moments exemplifying the facets this woman must work with; as deeply stimulating as the attempts are at getting John to notice her, there are wounds of regret lurking within the shadows of her private moments. A scene between she and her brother Todd (Stephen Root), in which the two argue over their mother’s house (and Doris’ subsequent mental illness), is heartbreaking in how the actors approach it; they are sincere and unassuming, and when there is an explosive moment in which both are forced to confront each other’s grudges, each meets the moment with honesty, emotion and a sense of plausible perspective.

On the flip side, this does pose somewhat of an obstacle in deducing exactly what the movie cares the most about: finding an identity for its heroine, or chipping away at her simplistic exterior for some kind of textbook psycho-analysis. The screenplay by Michael Showalter and Laura Terruso certainly gives her a great many things to accomplish in short order, but the simplicity of them often bog down the progression of her stability; on several occasions, one does not exactly know where any of it is going, or indeed where it should. Must the old girl win out in her schoolgirl crush towards such an attractive young man? Or is she destined to erode away in the safety of a past filled with regret and boredom? Signs point to a problematic third act with conventional scene staples, but thankfully the movie gets back on track just in time for three critical moments. A particular confrontation scene could have easily come across as contrived and pretentious, for example; instead, it is brief and subtle, and delivered at a frequency that synchs directly with the personalities of the characters.

The ending, furthermore, is tactical in the way it leaves final decisions up to viewer interpretation; there is an exchange that leads to a pivotal last-minute impulse, but who knows exactly what comes of it when the screen fades to black? However you perceive what goes on beyond that point, I think, depends on the perspective you reach while in her company. Are you optimistic that she will rise above the sadness she endures privately, or is she destined to lead a life without the conventional happy endings? Because the comedic and dramatic underpinnings are of a high caliber effort, I fall somewhere in between; it seems necessary for this woman to find her way into a positive situation without subscribing to the clichés of a storybook climax. In all of the film’s moves to generate appeal, “Hello, My Name is Doris” doesn’t necessarily take the most relevant road. But it’s sweet, honest, good-natured, and pitched by such a dedicated actress that we are willing to accept whatever challenges she goes through, especially if it means getting the chance to observe her in top form.