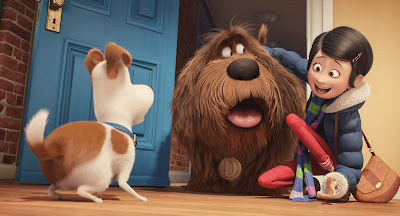 Does that discredit the attempt? It depends on your perspective, I guess. The movie tells the story of Max (Louis C.K.), a plucky and eager terrier whose home life is thrust into discomfort after his owner Katie returns home with another dog in tow: Duke (Eric Stonestreet), a large and clumsy brute who instantly moves in on his territory. Matters of territory overtake their interactions. At first apprehensive, Max grows to resent his new companion’s very existence, and a competition ensues that leads to threats, broken furniture and eventually an ambush at a park, where both of them wander too far off the leash and are caught by animal control. Inevitably the plot puts them in the path of renegade animals who sabotage the truck in order to save one of their own, and while in their company both Max and Duke convince Snowball (Kevin Hart), a small and mouthy bunny, to free them from their cage. That in turn progresses their adventure into an underworld full of menacing dangers and personality conflicts, all while friends of Max’s – including a female dog named Gidget (Jenny Slate) who has a crush on him – band together to go out into the city and find their lost friends before, I guess, everyone arrives at home at sundown.

So far familiar, but passable. A subplot involving the supporting characters sees Gidget team up with a hawk named Tiberius (Albert Brooks), who uses his muscle to ruffle up potential witnesses like a bad cop in the interrogation room. Through a process of acquiring details from the likes of alley cats (usually bald and tweaked out), she and a host of animal friends – including a fat cat, a dimwitted pug, a helpful parakeet and a skilled wiener dog – learn of Max and Duke going into the sewers with a gang of animal thugs, and acquire the help of Pops (Dana Carvey) in infiltrating their notorious lair. Who occupies those tunnels other than vengeful cats and dogs, they wonder? There are rabbits, geese, pigs and even a python among the ensemble of Snowball’s menacing gang, although the movie gives them very few scenes to establish themselves as substantial culprits in conflict (the most noteworthy exchange occurs with a snake, who by cartoon movie laws usually remains mute for the sake of nervous wisecracks by the heroes).

The downfall of all these subplots and side adventures is that we are always required to wind back up in the company of Max and Duke, two characters molded in the image of Woody and Buzz Lightyear that lack all of their charm. As far as dog personalities go, they are easily the most uninteresting lightweights to hold the center of a movie since Scooby-Doo: objects of minimal thought cast on the lure of boring interactions, in a movie where both the animation and the supporting players upstage them with ease. Perhaps if the filmmakers had gone the route of making a film that stuck to the intentions of its title, more could have been done with them. But “The Secret Life of Pets” is a misnomer rather than a suggestion, and what occupies them is just another case of lost travels as a result of carelessness. Nothing that happens to any of them is any more interesting than watching a pet owner’s home movies on Youtube, where there is at least a hope of something happening that isn’t mandated by a cartoon formula.

Their journey is so dry that even critical transitionary scenes are staged wrong – including a key moment when Duke must learn the fate of his previous owner, which ought to be used for bond-building between the competitors; instead, there is no emotional pull in the moment whatsoever, and it is quickly swiped in favor of a nonsensical chase on the bridge separating Manhattan from Brooklyn, where the filmmakers give Kevin Hart (the bunny character) yet another chance to be a manic motormouth. The only amusing thing that seems to transpire between the leads, oddly enough, is a fantasy sequence; after they wander into a sausage factory, the gorge so heavily on the product on a conveyor belt that they imagine themselves in some kind of drug-induced stupor, where hot dogs and sausages swim in synchronicity and dance on boxes as if they are auditioning for the Ziegfeld Follies.

Will any of this matter to children, or to parents that have the inkling to pay for a theatrical babysitter for 90 minutes? Of course not. As far as the capacity to entertain young minds goes, young ones will be dazzled by the fast movement and encouraged to laughter by all the obligatory sight gags. The characters are colorful and loud, and sometimes rather comedic (my favorite: a pig who was used as a tattoo model). The human characters have little to do with the misadventures of the pets, which ought to please most of the audience; too often in these sorts of stories, the realities of human bystanders detracts from the momentum of an innocent chase, especially one that must involve dozens of participants. For my purpose, the most stimulating element of the picture is the backdrop of New York: an intricate and towering cityscape that looks almost as alive as the animals when assembled out of good computer animation. With that much of an array of spectacle, one would think much more exciting things are happening in the streets below, but I digress. If pets indeed have busy lives like these while their owners are away, they could probably do a lot worse than stealing all of their ideas from Pixar.