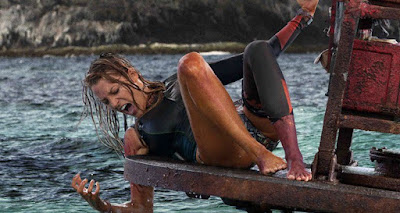 Ordinarily we would be cognizant of the picture’s sensationalistic destiny, no matter how hard the attempt to violate the suggestion. The prologue scene of a little boy discovering a surfer’s helmet camera is as shameless as teasers come, and the moody musical cues that intercut the more joyful surfing sequences only add to the foreshadowing. So why are we quick to fall for the gimmick, and see only the positive light of Nancy’s journey? Perhaps our blindness is driven by cynicism, especially when one thinks about the trajectory of creature features and how movies about sharks have devolved over 40 years. Spielberg’s “Jaws” remains the benchmark of the effective thrillers about oceanic predators, but nearly all that have come after have gone beyond mere inferiority: many are just downright insulting, including a string of terrible sequels and a generation of ridiculous made-for-television “Sharknado” films (only Renny Harlin’s “Deep Blue Sea” was ever worth mentioning). That “The Shallows” comes to fruition long after dangerous waters have become ridiculous cesspits speaks of the audacity of the director, but his is a delivery of careful and well-modulated tension when it could have merely been another run-of-the-mill bloodbath with bad special effects.

The movie is presented as a series of integral moments. Nancy’s arrival at the beach – an undisclosed island paradise, we can surmise – comes with the assimilation of a minor friendship with a man who drives her to her destination (this is, of course, a key development for the later scenes). There is an exchange of information done via a skype stream on her phone, where family tragedies are revealed; towards the end, her father begs her to return home and back to medical school, fearing a destructive path for his mournful daughter. But the high waves, perfectly cast in a bay of gorgeous blue ocean water, are too thunderous in their calling to inspire second thoughts. In the water she befriends two young surfers that are all smiles and rippling muscles, and they collectively find adventure in the perfect movement of the tide. Then she begins to observe ominous things nearby, not the least of which is the presence of a dying whale perched atop a rock, with large wounds torn out of its side. Curiosity overtakes her adventurous demeanor and she approaches, only to become lurched into the mouth of a deadly villain lurking underneath. The scene of her initial attack – shot completely underwater and mid-scream as blood from below fills the frame – is just as restrained as it is effective: there is no inkling to show us the source of terror because director Jaume Collet-Serra has studied monster movies enough to know that patience can be a phenomenal resource in creating audience trauma.

Equally surprising, Nancy manages a daring flee that ends with her perched atop the shelf of a coral reef, which has been left exposed because of low tide (another detail to add to the stakes of the later scenes). Hours upon hours pass; her medical training informs her ability to nurse the horrific shark bite on her calf, and she passes the time having minor conversations with a lonely seagull with a dislocated wing. The beast of her burden circles like a vulture in water, and that invariably leads to a situation that plays as a silent battle of wits: if she can swim to a nearby buoy in time to avoid another attack, she can send up a flare to passing ships. But that requires careful timing of the shark’s repetitive trajectory, not to mention a fast reaction time to unforeseen variables like poisonous anemone on the rocks and thousands of jellyfish gliding between her resting point and eventual destination. And if those obstacles seem obligatory to those fluent in the odds made against characters trapped by nature, then consider this added facet: if she is not destined to make it to shore with the help of others, how can she one-up this beast any further when the shore is at a much greater distance?

The twists and turns – some foreseen, others surprising – are clasped so tightly to the fist of their motivated filmmaker that he makes ordinary details feel like a noose tightening around our necks, and the uncertainty of the details all the more horrific. A game between creature and victim plays slowly and thoroughly through a series of gradual brushes with death, and never once do they overstate the obvious sensational cues; you get the sense that if such a story were to transpire, this is exactly how it might all go down. The shark itself, meanwhile, is monstrous but not designed as an elaborated fantasy, and there are few clear views of his enormous stature until the story deems necessary. Perhaps that is the most shocking of the film’s restraints, particularly when one considers that this is the same director who also made “House of Wax” and “Orphan,” two of the most visually vulgar horror films of the last 20 years. The climax is unbelievably absurd, sure, but given the corner his screenplay puts him in, that isn’t at all surprising or unforgivable. All of this must lead to something colossal for the sake of preserving the conventional Hollywood ending, and with few alternatives Serra does as he must without destroying the momentum of the preceding details, even if it means leaving some in the audience with groans of disapproval.

The test of any movie about a vicious inhuman force is harmless: can it inspire some level of dread, and do so without sacrificing logistics or going for the jugular of overzealous gratuity? In a time when the answer seldom favors the audience, “The Shallows” is a rather pleasant surprise of sensibilities, a movie of frenzied pleasures and sharp curve balls that doesn’t speak down to an already-disgruntled moviegoer. If we expected less, it has just as much to do with the dubious track record of its filmmaker as it does our own preconceived judgments. Where did this new spark originate? Was it mere maturity that informed his approach, or some kind of extraordinary internal evolution? Strange to think that this was once the same man who saw people as cruel and nihilistic tormentors destined for slaughter, and for no sake of dramatic value. This movie senses he is, at long last, done with all the pity and loathing – he is ready to be a genuine creator.