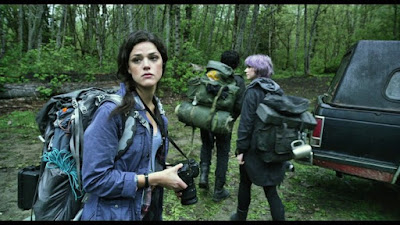 Surely some filmmakers agree with that sentiment, otherwise we might not have ever been asked to contemplate “Blair Witch,” yet another entry into a series that essentially acts as the primary influence for the “found footage” offshoot. Perhaps less obvious to the audience: the notion that its director, Adam Wingard, is a veteran of the style, having already helmed the likes of “V/H/S” and its sequel (among others) in the recent past. But if his interest was spurred by the style and assuredness of the original, then those films act as dress rehearsals for what he accomplishes in the frames of this newest endeavor. And though the odds were never great to match the dependability of the first “Blair Witch” picture, he has also not made a sham of the premise or its underlying values, either. There is a lot of good stuff going on here, not the least of which is a climax so well-orchestrated that it plays right into our urge to peak at the screen behind clenched fingers, arguably the greatest of litmus tests for fear-inducing journeys.

Some may come to see the material as an update rather than a follow-up. Essentially replicating the premise of the first picture with a few modern conveniences (including a drone camera), six 20-somethings gather in the streets of Burkitsville, Maryland with one simple aspiration: James (played by James Allen McCune) wants to know exactly what happened to his sister, who vanished two decades before while shooting a documentary in the nearby woods about the legend of the Blair Witch. She, you may recall, was an old soul from the 19th century who was accused of harming children, lead out into the forest, tortured and tied up by townsfolk who believed her to be an evil monster; after she died, the very forest itself essentially became a cursed compound for her vengeful energies. In modern times those forces manifested in a variety of ways – including a case of famous child killings – but no incident was seen as anything more than elaborate superstition.

Then came the famous Heather Donahue case, when she and two others wandered into the woods with film cameras to document the legend for a school project, and never returned to tell the tale. Their recovered footage was assembled as the famous “The Blair Witch Project,” and now years later an internet personality claims to have found more videos of the incident from within the Black Hill Forest – this rouses James’ buried curiosities, along with those of Lisa (Callie Hernandez), his close friend, who decides it would be wise to make a document of his search for the truth on camera. Along for that ride are Peter (Brandon Scott) and Ashley (Corbin Reid), two school cohorts, and Lane (Wes Robinson) and Talia (Valorie Curry), the Burkitsville residents who claim to possess the new footage. None in the core gathering regard the legend with all that much enthusiasm or belief, but Lane is a loyal enthusiast: growing up in the small Maryland town where the Blair Witch was used in old stories as a scare tactic against children, he fills the shoot’s atmosphere with an overreaching sense of menace (along with obligatory interjections, many of which are heavy-handed even by the standard of more hysterical actors).

The trick to the original “Blair Witch” – one of the more divisive endeavors over the course of time – is that it offered so much restraint when the temptation was there to be overzealous with the insinuations; as such, the three leads were sincere in their implication of fear, causing us to find plausibility in the idea that something supernatural existed in those woods. Successors would attempt to outdo this formula as the skill of special effects were more integrated, but few understood the involvement of our emotions, believing the key was shock value rather than gradual disintegration of fear barriers. Though this film doesn’t offer us the same courtesy, it nonetheless has some interesting ideas up its sleeve. There isn’t a sense of patience in the material, for sure – it only takes a single night of solitude for the suggestion to arise that something stalks them in the night – but the events are triggered with a good sense of choreography. The woods seem to take on the personality traits of an avid tormentor. Thunderous footsteps echo in the distance. Tree branches bend and snap. When the six awake from their first night, they are dumbfounded by two discoveries: 1) they have slept through virtually most of the day; and 2) twigs have been strung above their tents, forming the famous Blair Witch symbol. Is someone messing with them, or are the legends true? The conclusion is much more certain of the answer than any of the twists in the original movie, but they have to be: no one is likely to go to another one of these films just to discover that they have all been colossal pranks, after all.

The final act, consisting of nearly 30 minutes of elaborate chases and ambushes, more than compensates for the very brief setup of characters and situations. Some are injured, others become lost, and others still turn violent (the added intrigue: each of them carries their own head camera). And then there is a fabulous sequence that takes place in an abandoned house that appears to be the same destination as seen in the first film, a place of much fearful speculation. In those narrow hallways and abandoned dark rooms move some strange ghostly figures, but what are they – victims of the past, lost spirits, or projections of evil? Are they capable of harm, or are they just there to unnerve? The uncertainty is amplified further by a clever way in which the remaining survivors use their cameras; fearing that gazing on a witch directly will cause instantaneous death, they turn the lenses backward in order to see what is over their shoulder in the LCD screen. A more informed person who has seen horror movies would never have bothered going that far, but just as such scenarios depend on curious simpletons to wander too far into the maw, so must they learn to adapt to their nightmares with the tools and information they are given. One question still nags at me though: with such a limited possibility of survivors, who in the world continues to find all of this lost footage to be able to reassemble it?