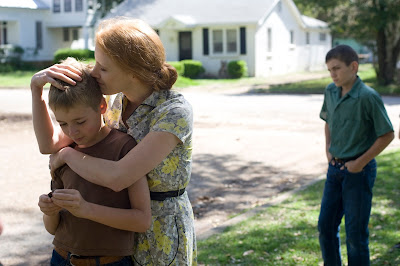 “The Tree of Life” is not the sort of movie one makes a point of seeing for the sake of lighthearted entertainment. It barely functions as a document about the human value system. But as I drank in the details again of young Jack and his simple middle-class family – at least in between the bookends of a plethora of profound visualizations of the world, the planets, and indeed the endlessness of the universe – I felt less betrayed by the subject and more at peace with the director’s contrasting obligations. To identify his meaning, exactly, is a chore best left to those who stare back at the frames with some level of introspection. My commitment came down to the experiences I could bring to the table, and how they correlated to the same sorts of questions that I routinely ask myself in more meditative moments. Jack’s story – as central to the film as a mere thesis – is just as much our existence as it is his, and if our upbringing assists in how we define our perspective, who is to say that a grown version of the same man cannot be left to wonder about the same rhythmic progression of the cosmos we share?

The young hero of Malick’s film is but one of a handful of important movie characters of recent times that have emerged in my mind as vessels of resonance. Consider his cynical counterpart, the Dr. Manhattan persona in “Watchmen.” Then think of the aging shaman in “Embrace of the Serpent,” who can be credited with the idea of dreams being the source of personal healing. What do these people exist for in the movies if not to expand our awareness of more than just behavior of observation? Are they people at all, or vessels of some profound force that is lost among the stars? For some, they can operate on dual motives: as people who grasp the wisdom of their own existence and as conductors of intellectual energy that underlines the causes of others. They seem to be made in the image of the Hal 9000 computer of Stanley Kubrick’s “2001: A Space Odyssey,” an artificial intelligence that knows not of why he does dangerous things, but only that he has been programmed to see the black and white for a subtext greater than basic understanding.

That is not to say young Jack is born into “The Tree of Life” with that same understanding, but his experiences certainly give him the means to transcend the conventional routine. He is the son of a loving Texas couple (played by Brad Pitt and Jessica Chastain), who are seen in all the familiar formalities of courtship – usually done in quiet montage – before they create three boys together. Jack is the oldest of the three, and perhaps the most significant of the eyewitnesses: his observations are colored by the direct contact of his parents, who frequently look to him as the pass-down of a series of life lessons. Many of them, unfortunately, are structured in a way that undermines their youthful wonder. Mr. O’Brien (Pitt) is a stern, military-esque disciplinarian who sees his sons as soldiers of responsibility, and their interactions are split between stern call-outs and shots of them with their eyes turned down during family dinners and loving embraces. Their mother, less strict but certainly ambivalent, nurtures them in the moments they share away from their father. But such contrasts are not enough to sway away the natural urge to rebel from dad’s sense of structure, especially after the family is moved around by cold economic realities and their father’s discipline is sidelined after he goes away for work.

Religious faith is a cornerstone of the family’s journey through Earth, a factor emphasized by the Chastain character in an early scene, where she describes nature as selfish and all-consuming. But what sort of faith can be unconditional, Malick argues, when one of the young sons dies by drowning, and another is destined to pass away off-screen in adulthood? Those events are just as much triggers for the parents as they are for Jack – the death of the younger makes the father much stricter and the mother far more assertive, while their oldest son sees it as a reason to lash out against an enigmatic creator (“why should I be good if you aren’t?”). Watching him move between pathos and youthful indulgence recalls two key events of cinema’s rich past: the arrival of Ingmar Bergman – the greatest of God’s interrogators – and Richard Linklater’s “Boyhood,” about a teenager who too looks at life differently based on the divergences he is destined to experience in adolescence. In some way they behave as seeds for the film’s first and last scenes, which seem to sit outside the normal flow of space and time and regard human life beyond the emotional implications. We can expect a family death to alter the course of a normal upbringing, sure, but what is to become of a person who grows hard and cynical and then is asked to deal with a second? One of the final shots, of a young Jack leading his older self (played by Sean Penn) towards a hill in the desert, acts as an astounding visualization of this metaphorical slant.

There is no explanation, other than that the absence of a reason can only be contemplated in conjunction with the goals of a cosmos too vast and mysterious to understand. The meditative nature of those scenes is just as profound as the images that fill it, including spectacular shots of whirling planets, desolate landscapes, rushing rivers and complex asteroid belts. At times, they are even used at critical intervals of the human narrative, which may infuriate some. How do they relate? Perhaps they don’t directly, unless one is willing to draw parallels between the strange patterns of a human mind and that of a star system that creates with no rhyme or reason. If Jack takes his behavior down dark roads and sees no way back, for instance, is that any different than when a planet is destroyed, or another created by a series of remarkable coincidences? If we look at ourselves as more than humans capable of emotion, then why must we ask the questions that have answers beyond our scope of reasoning?

When it comes to the films of our time that have such far-reaching audacity, “The Tree of Life” certainly does not rank among the great achievements. It lacks the fascinating fluidity of “Cloud Atlas,” the evocative nature of “Embrace of the Serpent” and even the empathetic trajectory of “Boyhood.” But it does, I now admit, have the capacity to anchor our contemplation deeply enough to be willing to read between all the fascinating lines. Actions, triggers and whispered narration are there to identify a common frame of reference, but details are no more important to the message as names or faces are to a catastrophic world event. I didn’t sense this in the paralyzing crawl I experienced back in 2011, but now, a few short years after personally towing the line that separates a mere sensation from a meditative perspective, Malick’s points are more enriching than the mere mutterings from a confused filmmaker. One might even say he understands more about this strange existence than he is willing to admit in front of a camera.