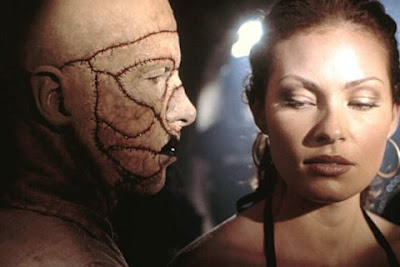 To describe what a viewer may witness in these 90 minutes is to imagine what it must be like to suffer brain trauma – some moments have the resonance of vapor, others inspire pain, and an even greater few suggest as many frustrating gazes as they do hopeless questions. Unlike video games, however, the film never bothers to set basic ground rules, other than perhaps the vague connotation that audiences have plucked their own from a catalogue of more reputable sources about zombies and undead attackers. But even that falls into question with the simplest impulses, and there is a sense as you watch the scenes that they have been filmed in no order, without cogent setups or with any of the actors knowing their lines before cameras start rolling. There is a moment in the first hour so bad that it emphasizes the overreaching laziness of all those involved. A woman is swimming off the shore of an island, her boyfriend is nearly passed out on the beach, and the camera pans under her dangling legs while the soundtrack thuds ominously, suggesting a reenactment of the famous opening sequence of “Jaws.” Instead, no attack comes; she turns back to the beach to find her man missing, and there is nothing further said of his disappearance.

What follows (and precedes, for that matter) is a series of disjointed, badly shot and poorly conceived scenes that have no artistic value and offer no sense of perspective, unless you’re the sort of person who thrives on supposed professionals making total fools of themselves. The story is a slapdash retread of nearly every dead teenager cliché of the past thirty years: five rowdy youngsters show up to the edge of a pier to take a boat out to a nearby island, where an apparent rave is currently underway, and discover their boat has left without them. A shoddy narration from an unknown source overlays their arrival: “If only they stayed in Seattle, they’d be alive today.” The words are then echoed by the puzzling gazes of Salish (Clint Howard), a longshoreman with eccentric behavior patterns who warns that the island is “cursed,” although not enough to inspire his mysterious boss Kirk (Jurgen Prochnow) to transport them out there anyway. Meanwhile, the movie hints at a subplot with the inclusion of a police officer named Casper (Ellie Cornell), who believes Kirk is smuggling something on his boat and pursues him just as events on the island begin to run amok.

But when the five arrive, they do not discover a rousing party atmosphere, as early establishing shots suggest; the rave has already been disbanded and all the participants have either gone missing or shown up dead, usually in a literal sense as bloodthirsty corpses. The source: a rather old looking church-like structure at the center of a clearing, said to contain the spirits of early settlers who have turned the island into a death trap for anyone who wanders within. The bigger crime is asking the audience to believe any of this is scary or plausible; the first time the “undead” creatures are visible during an early attack, in fact, their appearances are so badly conceptualized that it’s as if someone glued dryer lint to the faces of the actors and gave them Christmas lights to simulate their red eyes. Those are simply a launch point of an endless arsenal of offenses, however. The makeup of the actual zombies is amateurish at best. The villain, who looks like a device from the Rob Zombie discard pile, has no presence beyond the absurdity of his scowl. And when the inevitable survivors turn the initial attack around into nonsensical shootouts after long chases, the damaged heads of the deceased look less like works of movie magic and more like exploding watermelons full of spaghettios. And don’t even get me started on the film’s lazy use of blood, which looks less like the actual substance and more like someone spilling red Kool-Aid on the nearby rug.

I could regard this all with easy dismissal, mind you, had Boll not had the audacity to transition between scenes using footage from the actual video game. The very idea is ridiculous – certainly moreso than the terrible point-of-view sequence used in the “Doom” film – but nothing could have prepared me for the blatant visualization of something so ugly and revolting. While I certainly don’t pretend to be an expert in the field, I do know my timelines; because the game came out in 1997, that means the technology was far too primitive for it to be rendered on a movie screen in suitable resolution. Ergo, Boll’s shameless edits have all the finesse of a jarring blob sticking out between shots of actors running in different directions. What was his motivation? In my limited research, I could only cite one justification: the footage exists to pay homage to the source. Apparently no one ever bothered telling him that true dedications ought to come in the form of passable entertainment, not mere seconds of an old game that is probably far more amusing to sit through.

“House of the Dead” is an ugly, endless, moronic waste of film stock. I loathed every pathetic second of it. Will it endure in some circles, though, just as some of the most notorious bad films of all time have? It’s hard to see how. The movie is too shoddy to function as an absurdist’s wet dream. At a certain point the mistakes become so glaring that they no longer inspire anger or resentment – only mere boredom. And the ending is such an inconclusive mess that there is no incentive to heave a sigh of relief at the prospect of any ending: we become too distraught by the underlying motives of the story, which has the arrogance to assume anyone would be interested in a sequel. And indeed, one does exist, somewhere, in the bowels of a cinematic cesspit I hope never to venture. And if it remains true that follow-ups are generally far inferior to their predecessors, imagine what kind of punishment that would insist on those clueless enough to keep going.