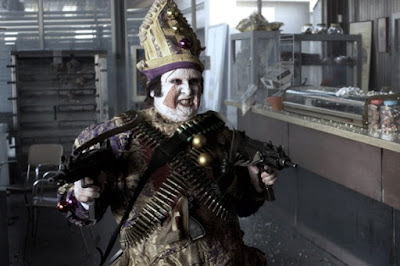 Someone, somewhere, might have handled this concept with some level of finesse. Even the prolific Stephen King, often sidelined by his own overzealous ambition, at least knows how to manage the psychological implications of a premise this delicate (even in screenplays, hardly his strong suit). But those behind “The Last Circus” are amateurs that care only about madness, whose chutzpah inspires the audience to stagger away after being overcome with sickness and disgust. It is of great wonder that the heroine, a woman caught in a violent tug-of-war of dueling psychopaths, is not suicidal from her first moment on screen; what this actress goes through amid the movie’s troublesome agenda left me feeling inflamed with hatred, even apart from the conviction of her focused performance. Did no one on set look at these details and suggest, at all, how grotesque they were, or how they might inspire viewers to test their own ideologies beyond the comforts of a more sensible fantasy? We live in times where the sensationalism of the provocateurs is more thoroughly accepted in suitable contexts. A movie this grim owes us the courtesy of a steady hand.

One suspects the promise of the early scenes unravelling quickly as the film settles into its grim agenda. Nearly 40 years pass from that cold day when young Javier (played as an adult by Carlos Areces) saw his father led away by dangerous men in uniform, and though his words persist as ominous foreshadowing, the man before the camera seems far too withdrawn to consider any particular subtext. Early on he joins a circus clobbered together with the strange and socially dysfunctional, and their career endeavors barely seem to be about inspiring childhood laughter; they are more like elaborate facades to keep beasts caged under the surface. Unfortunately, the primary clown of the company – a destructive lunatic named Sergio (Antonio de la Torre) – makes no secret of those qualities, especially in rather public gatherings where he intimidates the others. There is a key moment at an evening dinner when he tells a rather crude dead baby joke, inspiring the uncomfortable laughs of his peers, when Javier inadvertently applies reality to the punchline. Natalia (Carolina Bang), Sergio’s beautiful girlfriend, senses Javier’s disconnect and foolishly attempts to mediate, inspiring a scene of brutal abuse (to be followed almost instantly by intense public sex – their form of mutual apology, I guess).

Consider that moment carefully. It reflects dueling perspectives of the film’s overreaching framework: blurred edges between anger and passion, with little distinction separating the two. More observant films would look at the former and obligate the necessity of a hero, and indeed the early scenes with Javier – as withdrawn as his emotions are – suggest a lead-up of that possibility. He admires Natalia. She returns a morsel of that respect (she likes that he doesn’t want to control her), despite that it places him in a compromising position. But by relegating her to the status of a co-dependent victim with few noteworthy judgment calls, the movie muddies the waters of that outlook. A later scene involving a brutal attack against Sergio using a trumpet clearly alters that trajectory, although not in the way it should; instead of ushering one onto the case studies of a fragmented psyche, the movie simply piles on the violence and torture in repetitive increments, leading one to a dubious conclusion that seems ripped right out of the trashiest of fatal love triangles. Yet there is no inference on any part that the audience can consider this all outside of the surface implication. It is all bloodshed and no causality.

But is it all just a fantasy in someone’s pain-ridden mind? A nightmare? A daydream? Or a literal visualization? So many of the integral twists don’t match any set criteria. While it is possible to suspend enough disbelief to assume that Javier may, in fact, snap from enough of Sergio’s abuse to completely disfigure himself with a pen knife and a hot flat iron before a destructive rampage (those scenes are among the most uncomfortable to endure), it is not plausible in many realities for him to disfigure his rival so ambitiously without said person needing at least months of recovery before engaging him in open warfare. Beyond the initial impact of a moment, furthermore, none of the characters seems to feel actual pain; they appear to be staving it off by entering some level of radical disconnect. Then there is a ridiculous detail in a subplot involving Javier’s hiding in a cave that is startling in its stupidity: after he nearly murders Sergio and runs off into the wilderness, naked and muddy, a deer stumbles from a clearing high above and collapses on the floor of the cave, conveniently setting him up for good food coverage. And let’s not even go there about the shameless recycling of the old Hollywood shootout cliché during the climax, in which legal authorities manage to fire thousands of rounds of ammunition without actually hitting any of the targets.

The director is Álex de la Iglesia, a man famed in his native Spain, whose films are often irreverent hybrids of the macabre and tongue-in-cheek (his two most notable are “Dance with the Devil” and “The Oxford Murders,” both of which contain some great narrative intensity). But his sense of judgment here must have been displaced by the austerity of the material; he handles it with a camera that feels like an invasive weapon in the pain and suffering of shrieking victims, and he never allows characters to emerge as a plausible conduit for sympathy. The technical merits are a triumph, certainly, but they only underline the failure of his foreground: images this precise, this sharp, deserve far more than subject matter this miscalculated, or dialogue this utterly cruel. Could something have been salvaged in these deplorable details? I am positive of that assumption. On paper “The Last Circus” features details that are the launch point of a challenging – if divisive – thriller. The only thing that unites us in this unfortunate final result is our collective loathing.