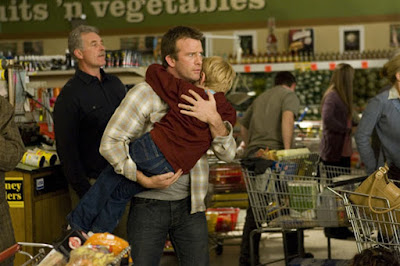 Movies anchored in deep mysteries depend just as much on their endings as they do a gradual momentum of tension, otherwise cynical audiences begin to question the motives of their filmmakers. Getting caught up in the thrill of a chase or the grind of an ambiguous device comes with a certain amount of excitement, certainly, but rarely does one walk away satisfied if it is all used to a point that undermines the experience of jumping during the key moments. Something, perhaps, about an inconclusive explanation (or worse yet, a ridiculous one) undercuts the meaning of having a good time, even for something as innocent as a Saturday popcorn matinee. Take Frank Darabont’s “The Mist” as a prime example. Here is a film pitched at a median aesthetic, made with competence and skill, and played by actors who seem to be far above the roster normally attracted by such stories. By all measures we should be eating an opportunity like this up with great enthusiasm. But the last 30 minutes play like a dismissive ambush, leading to a final scene so utterly misguided that I wanted to hurl obscenities at the screen.

Up to that point, something at least seems to be inspiring our interest. The movie opens on a cold night in the most famous of Stephen King locales – Castle Rock, a small New England village apparently responsible for a plethora of literary nightmares over the past few decades. One night a ferocious storm moves into town and causes tremendous damage to residential neighborhoods, including that of David Drayton (Thomas Jane), an artist and family man whose latest painting is destroyed after a tree crashes through the window of his home studio. Those become some of the least of his worries, however. Another tree falls and destroys his shed on the lake. His wife notices a strange mist off in the distance between two mountains. The neighbor, a usually disagreeable sort, asks for a ride to the store for emergency supplies after his car is rendered unusable. The town is in power blackout, inspiring that famous grind of grocery stores ringing up hundreds of customers by hand while the tensions of the crowd are buried behind nervous platitudes. The camera is curiously invasive to a handful of strange looking military figures wandering the aisles, no doubt because they are destined to become primary players in what is to follow. Who are they, exactly? And is their arrival coincidental, or a suggestion of something more?

So far, ok – we can deal with this. We know the mist spotted in the early scenes is meant to come with some level of horrific uncertainty, but Darabont’s screenplay is clever in not calling much attention to it as a device beyond an isolated scene of discussion. Then, just as the lines of the store gradually decline and dialogue formalities are exhausted, sirens start to sound throughout town. Cars rush past in a flurry of dramatic chase. A man, bleeding from his forehead, arrives to announce the arrival of the foreboding mist: something inside has taken a good friend of his by force, inspiring violent flight. A feint collection of screams can be heard over the sirens, and then nothing… the cloud has now consumed the parking lot, leaving all within the facility powerless to do anything but stare on in confusion. Inevitably the answers aren’t so much conclusive as they are open-ended, but that’s to be expected. There are only so many scenarios one could create to fit the mold of this approach, and nearly all of them require there to be some level of ambiguity until the final act, otherwise the survivors are simply exchanging strategies and arguments for a dead-end cause.

Now let’s contemplate the victims. They are clichés more than people. Consider store clerk Ollie (Toby Jones), who services the agenda of the shy but level-headed mediator between all the hot-heads; the story uses him to propel some of the key decisions, including two that inspire critical jump scares, and there is a moment in the climax where the primal instincts take over that reminds us how natural it is to root for underdogs. We can accept him as a formula staple because some are dependable. And yes, we can even accept the dreary nobility of the lead David, even though he exists to essentially remind us that logical sorts are only a breath away from their own radical impulses. Not so inspired, however, is the need of the story to create such glaring divides of power by those who disagree with the path to perseverance. “The Mist” creates one in the form of a character played by Marcia Gay Harden, a crazed religious fanatic who uses the danger of the outside to inspire long-winded sermons within the store aisles. That inevitably splits the ensemble down the middle, and soon it becomes a war between the more logical thinkers and the more threatening doomsayers, who eventually become so ingrained in their one-note ideology that it comes across has narrative desperation rather than as a commentary on fanaticism. Watching this woman actually discuss the possibility of human sacrifice, I thought back nostalgically to the Christopher Eccleston character in “28 Days Later,” who suggested a similar philosophy but used it to the service of a believable gray area, where one gathered people might legitimately arrive at bad decisions based on what they had seen and experienced in the weeks before.

The problem with “The Mist” is that it makes such leaps out of a few hours of isolation, not any meaningful consideration of its fatalistic scenario. Are we supposed to believe so many ordinary observers are going to be one over by a woman prophesizing the end times so quickly? Setting the situation inside a grocery store, I think, undermines the point further; are these people going to become so desperate so quickly when the most worrisome concern – potential starvation – is essentially handled? Other factors come into play as they must, especially after they begin encountering strange creatures emerging from the mist itself (one victim suffers burns so severe that they necessitate a dangerous trip to the drug store next door), but they are little more than platforms to episodes of tension. In fact, minus the crazy tirades of the religious nonjobs who implausibly turn to violence, nothing substantial implicates the immediacy of a flight. And because the script is written so strategically to placate that agenda, we begin to regard the whole journey as a giant mind game with no point other than to mass manipulate.

Everything exists, essentially, to lead up to one of the worst final scenes of recent memory, in which the characters are confronted with the possibility of no escape and are enslaved to a ploy that destroys the basic foundation of the story. I am hardly one to dismiss the possibility of a bleak ending, mind you, but only when the occasion calls for it – hopefully in a movie about something concrete rather than just a series of scares or loud shouting matches. “The Mist” isn’t interested in going all that deep. So what nerve does Darabont have in tacking on such an out-of-place conclusion? I have juggled dozens of theories, but what would be the point of entertaining them? No rationale exists for what those last moments inflict on us. Because this is a movie that wants us to feel the anxiety of its many hidden dangers, it’s a wonder no one involved pointed out how such a downbeat ending might make the audience regret showing up in the first place.