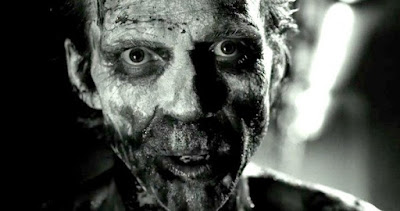 Horror films have so thoroughly grappled with the homicidal psyche that it’s little wonder they would come to celebrate murder as a sporting event. Rob Zombie’s “31,” molded in the image of the recent “Purge” series, supports that theory with the conviction of a bloodthirsty showman. That this is the same filmmaker who discovered the deviants of “House of 1000 Corpses” and “The Lords of Salem” is hardly a surprise, especially to those who will be quick to spot their stylistic parallels, but a certain morbid humor lifted those endeavors into different spaces of reasoning. So is not always the case with this film, however, in which a host of carnival workers are kidnapped, imprisoned and sentenced to 12 hours of life-threatening obstacles as a series of psychotic killing machines are sent off to hunt them down. “The Purge” at least saw that premise from a relevant political subtext. As I watched Zombie’s latest, however, I was less convinced that he was dealing with powerful philosophies (much less a tongue-in-cheek awareness) and more apt to believe he was trapped on the hamster wheel of his own overwrought artistic values.

That is not to say what is carved into the screen lacks enthusiasm. Somehow, even as the material shifts haphazardly between flashy violence and dramatic intensity, our eyes keep pace with everything Zombie pitches (yes, even the humor of it all). But why is he pitching it at all, particularly when this has all been done before, and in far better ways? Were the hysterics of his “The Devil’s Rejects” not enough to validate his worth as a conductor of the macabre? There is no question that this is a man who understands both the mechanics and the tone of homicidal character studies, but “31” shows him losing sight of the prize. There is a scene in the first five minutes so captivating that it creates thunderous expectations the film itself can’t possibly live up to, infuriating us in the end when we should be eager to watch on with perplexing fascination.

Let me set the scene. The movie opens on Halloween afternoon, and a gathering of crude, sex-hungry hippies cram into a camper to engage in that ever-familiar pastime of dead teenager pictures: driving off into the desolate backwoods of the south while they indulge in youthful pleasures, unaware they are destined to become victims in a sadistic game of murder. Along the way they have encounters with outsiders (and each other) that consist of rather perceptive dialogue exchanges, mostly for the sake of creating portraits of the various personalities; they aren’t the sorts of people who would make it far in graduate school, but there is a savvy to their street-wise observations of everyday rituals and monotonous pastimes. There’s also a certain danger in the way they interact, too; the Charly character (played by Sheri Moon Zombie, the director’s own wife) has a moment where she shamelessly comes onto a toothless gas station attendance (for his amusement, or hers?), and Roscoe (played by Jeff Daniel Phillips) berates his girlfriend for asking dumb questions while simultaneously engaging in suggestive innuendo with a horny stranger he meets at the rest stop. These are typical situations dressed up in the unconventional wisdom of their director, a man who senses the underlying power of the premise by allowing his characters to spin them into sardonic witticisms instead of all the fluff of victim chit-chatter.

The conversations arm them with a sense of self-worth that becomes necessary when they inadvertently take a road that leads them to a dangerous dead-end, where they are ambushed by a group of masked thugs who murder three and kidnap the other five. Their destination: an underground compound that looks like a leftover set from the dream sequences of “A Nightmare on Elm Street,” full of steaming pipes, maze-like corridors and dangerous obstacles that will become the testing ground for their physical endurance. Prior to that, they are greeted by a small gathering of individuals led by Malcom McDowell, who inform them that they are participating in a 12-hour game dubbed “31,” where they will be forced to run amok in a labyrinth of puzzles while murderous villains are set loose to carve them up. The repeating gag (intentional or not) is that those wielding the weapons often do so as an outlet for their own dark humor, which intercuts the violence with punchlines that have their own unsettling contrast.

Zombie’s rhythm, for the most part, keeps pace with these distinctions. His movie is filled with astute observations, many of them centered in an assembly of haphazard sequences that have the mental clarity of undiagnosed schizophrenia. That is the value of placing such severe material in his hands rather than, say, Eli Roth, who would play it all too sincerely; there is an acknowledgment underlining the scenes that this is all done with some semblance of innocence, even as the content grows increasingly dim and the murder weapons ever so destructive. But they don’t lead to anything profound or resonating, and the movie peddles through the motions as if to insist we have only shown up for the sensation of it all. Lesser directors might get away with creating that suggestion, perhaps, but Zombie is far too talented to be just about the showman aspect (as pertinent it may be). Consider two isolated scenes – one early on and one towards the end – when a maniac played by Richard Brake uses words to undermine the game faces of his victims before slaughtering them. Would any other filmmaker have bothered to give any actor in these kinds of films the time and focus for such a paralyzing moment? The performance is astoundingly good, ultimately casting a shadow that the rest of the picture finds it hard to match.

That’s because we are not watching a movie that is mindful of its creator. Violence for him exists in a stasis of emphasis, where it is a behavioral consequence of minds that dominate us with their diabolical contexts. But the last half of the movie forgets that notion entirely, and most of the characters lumber through the screenplay as if their diatribes are only providing setup for the ambitious killings. Some of them – including a long and grotesque sequence involving chainsaws – are completely out of step with the more careful possibilities of the premise, and at a certain point the disgust factor is simply destroyed by annoyance. Who will live? What will they do to survive? Those are not questions we frequently ask at Zombie’s films because they exist outside the conventions of their genre. He is a celebrator of deeper meanings. “31,” unfortunately, sees things from the shallow end of that creative pool, leaving one to wonder if he can tell the difference anymore.