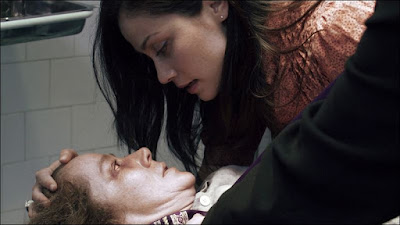 Not all the pictures of this classification adopt this ideal, but for every exception there comes a dozen others submissive to that standard. The bleaker the subject matter, the more prone they seem to be to the condition. Take “The Devil Inside” as a primary example. Written with the panache of a sadist who understands nothing of narrative conviction, here is a film about wholly incompetent characters who move their way through a situation they have no hope of escaping from, even if they had somehow been gifted with the possibility of foresight (or basic human intelligence). What they are required to do here is pedestrian – namely, stand back, observe and react helplessly as unseen demonic influences move their way from one body to the next like players in spiritual hopscotch. The attempts would be tired even by the standard of demonic possession vehicles in any sub-genre, but in the hands of people who are in over their head and have no genuine understanding of theological implications, it makes for a cynical exercise.

The premise at least starts off promisingly enough. Title cards first emphasize an ominous police call coming over radios on a night years earlier: a housewife named Maria (Suzan Crowley) has called legal authorities to inform them, quite inertly, that she has murdered three people. Crime scene footage obscures little in the way of detail, in what appears to be the unfortunate slaughter of Catholic servants in the basement of a home. What were they there for? What do the damaged restraints nearby suggest? You know the answer with little in the way of exposition, but unfortunately few of the characters do – no, not even poor Isabella, Maria’s daughter, who grows up lacking all understanding of why her once-happy mother would be whisked off to a mental hospital in Rome despite having no other connection there.

Also not surprisingly, there are claims early on that the Vatican “did not endorse this film.” One would wonder why if there was anything noteworthy going on. The plot involves Isabella travelling to Rome to meet her mother for the first time in two decades, hopefully to find out why she snapped all that time ago (inevitably, early recollections paint her out to be “the nicest woman you’ll ever meet”). After it becomes apparent that something sinister lurks underneath, she meets up with a defected faction of Catholic Exorcists, who are initially seen organized in academic discussions about how to tell the difference between possession and mental illness (they banter about warning signs videos of test subjects and discuss those perceptions). Why not go directly to the church to ask for an exorcism, you might ask? The movie doesn’t come right out to explain why, but I would suspect a cameraman standing nearby doesn’t help matters. He, unlike any of the others standing in the frame, has little stake in the encounters; often nonchalant and detached, the filmmaker interviews himself as a contrasting observer, never certain whether what he is seeing is the work of evil or just some violent form of mental illness.

Movies that don’t arrive at a certainty can be fun. “The Exorcism of Emily Rose,” one of the more recent films in the satanic thriller canon, worked mostly because it underlined horrific situations with the burden of doubt; we could never be sure whether the title character was a victim of supernatural influences, or simply lost in the fog of her own fragmented psyche. “The Devil Inside” doesn’t have that luxury, perhaps, because it would defeat the purpose of the technique. A handheld camera must make us believe that we are living in the worst-case scenario, and when two exorcists perform the ritual on her mother right there in the mental hospital (a totally unbelievable scenario, mind you), it causes startling ramifications. One of the priests experiences a drastic change in attitude, and nearly a drowns an infant child at a baptism. Isabella becomes belligerent, almost insulting. Is that the result of what they have witnessed, or did the exorcism splinter the demonic personalities and allow them to latch on to other hosts? It all culminates in a climax more confusing than the ambiguity it rests on. And then the final cut, involving a mad rush to a hospital and then into a speeding car, cheats the very nature of the subject matter. Found footage films sometimes get off at the notion that the material must make an abrupt cut without offering a definitive explanation, but here is a conclusion so abrupt and unfair that we are not even left with any sensory impact.

The movie is all flash and no guts, lacking consistency, believable explanations, depth, and even a general desire to tell a plausible story with dimensional characters. Once upon a time we could have fun with the concept if the approach involved something resembling zeal. We didn’t mind if the people in a film like, say, “Evil Dead,” were razor-thin as personalities, because they were tools used to fuel a greater purpose than just an agenda of blood spatters. If they didn’t possess the vague hint of wit or humor, they at least were skillful technical exercises. And they didn’t aim too high, either. Those of us who go to a movie about demonic possessions will find “The Devil Inside” to be the antithesis of such sensibilities. It’s a show of amateurs. There is a moment early on when Maria lets out a horrific scream that vibrates the very walls of her room. For a brief moment you wonder if the actress experienced similar horror after reading the script.