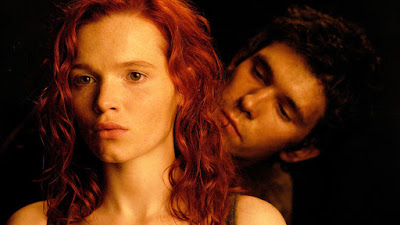 Of course those are not the sorts of preconceived ideas that drive him, either. Here is a man whose interests are far more obsessive and succinct, to be demonstrated early on as he visualizes his entire surroundings while lying down on the pavement and taking in the smells of all the nearby features. Then, when the moment comes when he must discover new and exciting smells in the heart of Paris, something profound happens: he meets a young girl selling plums whose aura is the most intoxicating he has ever encountered. There is a desire, a need, to capture it. But a misunderstanding leaves her dead at his feet, the poor victim of a man’s misguided thirst. When a character later suggests that a person’s scent is the embodiment of their soul, young Grenouille becomes consumed by the notion of preserving it – no doubt more because they represent a sense of euphoria he has yet to discover in a life saturated by mud and decay.

There lies the launch point of “Perfume: The Story of a Murderer,” a film that takes on the strange mission of creating a character whose loathsome misdeeds are a consequence of something more than just your run-of-the-mill murderous tendencies. Some would read between the lines and discover only warped reasoning to frame his psyche, but there’s a lot that makes sense here, even if it’s just for the sake of following the story’s volatile dramatic currents. A homicidal mind, after all, emerges because the body housing it senses liberation beyond moral constraints. Consider how Grenouille arrives at his destructive pattern. After his ill-fated encounter with the girl selling plums, he comes into the company of Guiseppe Baldini (Dustin Hoffman), a floundering French perfumer who is marveled by the boy’s ability to dissect the formulas of any number of his creations down to the precise measurements. “Teach me everything you know,” he pleads, and so Grenouille is given a lengthy lesson into the chemistry of scents and the culture they have inspired. What the boy does with these concepts is obligatory to the movie’s point: he must filter them through a perspective that sees women as the vessels for the most resonating of smells, and thus begins a long descent into the fragments of his ominous psychology.

The movie opens not with any of these suggestions but rather with a flash-forward to the climax, in which French nobles sneer viciously as he is sentenced to death for the murders of a dozen young girls. What motivated this pitiful creature to undertake something so heinous, so unfathomable? Only he truly understands the reasons, and others are left to contemplate a plethora of absurd theories. But we are not yet allowed to see how this turn of events is meant to pan out – both a smart and unfortunate maneuver on the part of the screenplay. It is of course wise to save your most precious secrets until the very end – even if the dialogue foreshadows some trace of the outcome – but the movie ultimately paints itself in a challenging corner. And when the big reveal of how others will respond to Grenouille’s experiments must arrive in the final minutes, I was so aghast at the insinuation that it left me shaking in utter disgust. Here is a movie with a resolution that is impossible to deal with even on a metaphorical level, soiling what otherwise might have been an effective character study (even one based on mere fantasy) and leaving behind a shell of ambitious failures.

I despise this movie, more or less, for the promises it squanders. Helmed by Tom Tykwer – who would go on to co-direct the ambitious “Cloud Atlas” – there is a sense of value in aesthetic lurking beneath this misguided plot. Not a single shot of the film lacks artistic distinction, and the editing by Alexander Berner contains an intensity that adds emotional weight to all the impending character encounters. Furthermore, the performance by Ben Whishaw (still fresh-faced and unassuming) is a wonder of conviction, contrasted further by quality work from Alan Rickman and Dustin Hoffman, who seem like they are trying hard to sell a plausible product. I wonder if they knew what sort of resolution they were dealing with before any of those scenes were shot, though. Did they not sense how such an insulting final act could cheapen all the work they put in? How was it sold them by the writers? Surely no one could find the words to rationalize the existential chaos that goes on in these final minutes?

Bad endings are rarely powerful enough to completely undo good momentum. In some cases, they can be excused, especially if what comes before is persistently rewarding. Only on a handful of occasions does the result of a climax invalidate the earlier moments, and when it does rarely is it to the point of grandiose catastrophe. “Perfume: Story of a Murderer” could have been a damn good film worthy of a discussion, but its final minutes are the equivalent of burning the film negatives. So rarely has there been a last act this damaging, this extreme, in its ability to undermine such promise. There is a moment at the end when the narrator observes how Grenouille is destined to be consumed by a world thirsty for its own pleasure, leaving not a trace of whether he was ever there in the first place. One wonders if any world with above average intelligence would be better off in that case, especially if it meant sparing us all the embarrassment of such a tone-deaf conclusion.