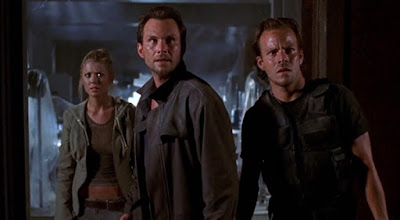 There can be an underlying aesthetic to failures in this medium. The more memorable bad pictures suggest a cheerful miscalculation, a result of people who don’t intend to do anything malicious other than give audiences two hours of escape, however dimwitted. Marginal films will be momentary, terrible ones might feel like prison. Some can achieve notoriety as unlikely comedies, others may merely be lost in the mind’s dumpster. But they are still journeys outside the box, driven by someone who enjoys what they do. Now we have arrived in an age where some are energized by the bare implications of greed, with little regard to the intelligence or desires of the viewers. And every once in a while one will come along that personifies all the detestable characteristics of the underbelly of dismal cinema, where no one shows remorse for their actions. “Alone in the Dark” is a film so bad, so utterly worthless, that one is left gob-smacked by the possibility that this industry, at long last, may have abandoned the need to reason with the audience.

I don’t consider these proclamations misplaced or even over-dramatic. Let me tell you about my experience with Uwe Boll’s opus. I first saw the picture in 2005 during a very brief first-run stint in theaters, when major chains still had the capacity to spot a dog from a great distance. Only two movie houses in town were showing said film: one a few miles outside the city, and one just up the street from where I lived. The promotional campaigns were nonexistent in nearly every facet of the internet and television, creating a certain mystique – what was this strange vehicle claiming to be based on a video game, and what could it offer? Boll’s name never registered in my consciousness, although I ought to have done the necessary research; this was a man made famous for his grandiose miscalculations, and not a single endeavor in his filmography had contained an audience rating higher than a 4.0 out of 10 on the Internet Movie Database. Why could I have not seen the signs? Curiosity led to some of the most uncomfortable 96 minutes I can recall spending in a movie theater, an experience made more troubling by the fact that it’s numerous aberrations could not be described or brought to cohesion. And in a rare sign of concession, I declined writing about it – because I simply had no idea how to deal with anything I was seeing.

Twelve years and a lifetime of recovery later I am no closer to understanding a single iota of this absurd exercise. The movie is all smoke and no fire, entering the brain long enough to cause irritation before dissipating into a cloud of utter confusion. Even the official synopsis of the plot supplied by the studio barely hones on a point of clarity: “The movie focuses on Edward Carny, a detective of the paranormal, who slowly unravels mysterious events with deadly results.” Ok, so what are those events? How can they be described? My recollection of the material had so been warped by the ineptitude of the presentation that a fresh viewing became necessary in the present, despite my hopes to never consider these scenes again. Only then had I realized the error in delaying a written assessment; it meant that a decade had passed with one less cautionary plea in the criticism zeitgeist. Calling what exists before us a pile of trash isn’t merely a critique, it’s a necessity to the endurance of informed decision-making.

The very first minute offers a worrisome clue: words describing story’s setup crawl slowly over the screen while a voice-over recites them verbatim, as if to assume no one in the audience is literate. Then we are hurled into a cluster of badly-shot chase sequences in which the main character (played by Christian Slater), an escapee of some vague childhood orphanage experiment, is chased down by an ominous figure in a taxi cab with bloodlust in his eyes. His intentions are not clarified until much later, well after other strange events plague the foreground. Among them: an archaeological dig involving a gold crate carrying a monster; a chase in a museum involving a badly-rendered beast on four legs; an obligatory intervention by a government agency known as Bureau 713, assigned to watch over paranormal activities; a revelation that the Slater character was once part of said division but has since gone rogue; a mystery involving Dr. Hudgens (Matthew Walker), the employer of Carny’s girlfriend (Tara Reid), being possessive about recently acquired artifacts; mumbo-jumbo about an alternate dimension of darkness becoming merged with our own; an anomaly in which all of Carny’s former peers at the orphanage become “activated” once the gold crate is opened; and the discovery of a worm-like parasite embedded in their spines when they start being picked off by authorities with guns.

How any of these strands fit together is anyone’s guess, but my assumption is that “Alone in the Dark” borrows most of its inspiration from “Doom” and “Resident Evil,” two other famous games about the government having shady dealings with the mysteries of evil presences. Neither of those films was anything to gush over, but they are marvels compared to what goes on here, in a movie as dead and vapid as it is befuddling. There are full passages here so badly clobbered together that it’s impossible to understand what’s occurring in the foreground. Are the agents of the bureau going into a cavern to shoot out the monsters, or are they attempting to escape them? What sort of conflict is there between Carny and Richard (Stephen Dorff), one of the agents, that inspires heated exchanges and dirty looks? How come no one being chased down by the bloodthirsty aliens is all that alarmed on their first encounter? Have they encountered them before? Every soul on screen is resigned to a gaze of total ambivalence, undermining the point further; it is clear that no one cares at all about making sense of the material, because they have only shown up to collect monetary payoffs.

But they can’t carry all the blame for a movie that seems directed with the skill of a fruit fly, either. Working from a script penned by three underachievers, Boll musters minimal effort in directing these scenes; he is as misguided by his own overwrought vision as a serious filmmaker as he is about the clarity of his plot’s details. What we are left with by the end is less than zero – no sense of understanding of this plot, no formal idea of what the characters stand for, no concept of how the monsters coincide with a government plan to experiment on orphans, and no idea what any of it means for a confused civilization. There is a moment during the climax when the leads stare down a passageway containing a door that leads to something more ominous, forcing one to stifle their curiosity with these wise words: “some doors are meant to stay shut.” Given the exhausting mess endured by the audience, we sense dual meanings in those words.