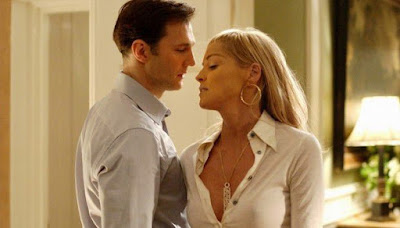 Rarely has a follow-up so perfectly replicated the downtrodden standards of its predecessor. Once considered a landmark in the erotic thriller sub-genre, the original “Basic Instinct” came and went in a cloud of controversy that served to propel the audience’s relentless thirst for cheap gimmick and sub-par sexual fantasies (not to mention the over-inflated pocketbook of its self-serving scribe, Joe Eszterhas). Though it was far from being the best endeavor in a long line of star-studded skin vehicles of the time, it certainly was one of the more notorious, and the famous shot of Stone uncrossing her legs during a police interrogation was of popular distinction for an emerging generation of pop culture satirists. But like a premature orgasm, the remainder of the film seemed to be reaching for the climactic sensation without any of the buildup, and once it was over there was scarcely a desire to understand it further (much less considerate it as serious drama). This sequel, arriving nearly 15 years later, contains the same underlying motives but only seeks to confuse us to the point of anger. I have read fragments of misguided amateur screenplays that have more finesse applied to them than what goes on display here.

Consider this premise. Years have passed since the events surrounding the first picture, and Catherine Tramell, apparently the luckiest mystery writer alive, continues to live on the razor’s edge of a dangerous life of sex, drugs and murder. The opening scene underscores her dichotomous brand of pleasure; a drugged-up soccer star brings her to orgasm just as she is speeding through the empty streets of London, and the moment ends with her car crashing into the river canal. She escapes, of course, but her passenger isn’t so lucky. This detail runs parallel with the first few minutes of the last picture, which now plays like a perennial framing device; Catherine finds great ecstasy not from a risky sexual outlet but by the outcomes that follow, in which legal authorities seem eager to place guilt on a woman repeatedly at the center of circumstantial tragedies. “I hate to be bored,” she chirps defiantly back, and there is a sense, even to those exhausted by the insinuation, that she means exactly what she suggests.

If her existence has always been intriguing as a psychological study, then it’s just as well her latest match comes in the form of Michael Glass (David Morrissey), a therapist drawn to her with tempered curiosity. He is hired early on to develop a profile on her for the purpose of courtroom theatrics, and the conclusions are significant – he wisely observes that she is “addicted to risk,” with each successive endeavor requiring greater challenges while exposing others (and herself) to dangers that are typically fatal. But when Catherine decides to pursue treatment through him after such an astute diagnosis, it serves to embellish the two narrative staples: 1) her own fixation on one-upping all those who should know better; and 2) ensnaring him in dangers that are elaborate precursors to foreplay. The ethics of his position ought to be a barrier between him and the considerations of lust – just as they should have been for the Michael Douglas character in the earlier picture – but no one, not even a seasoned psychologist, is immune to her devious charms. Early on, when she stares into the news cameras at her release hearing, her confidence is overwhelming; she isn’t so much looking into a lens as she is seducing a man she knows is watching on from a distance.

Okay, so we can buy this idea at face value. A story this superficial necessitates a certain disbelief, if just for the thrill of the chase. But there are plot developments occurring throughout the picture that have the subtlety of a carnival sideshow, and things never add up sufficiently as an intellectual exercise. Characters with ulterior motives endure the fate of becoming puppets in her schemes, or victims of violent and ambiguous deaths. Their dialogue, often circuitous, only distorts that certainty, because everyone is trying to sound more intelligent than they really are. And then Glass becomes the primary suspect in a string of tragedies surrounding his life, though only one – a cop played by David Thewlis – seems to believe they originate through Catherine. Do they? Or are they just red herrings distracting him and Glass from greater mysteries at work? And why are so many of his colleagues – people we assume have gone through decades of psychological training – so quick to dismiss his behavior and findings when he is keeping the company of a woman with bad luck that is well-documented?

I applaud ambiguity in movies with the foresight to intrigue. “Basic Instinct 2,” however, only seeks to infuriate. It is a vague, open-ended mess. And part of that stems from the impossibility of Stone’s character, who is sold so consistently as an expert manipulator that it circumvents all foundations of logic, including the one that suggests well-trained legal professionals should be more perceptive than promiscuous mystery writers. Here is a woman so lucky, so unequivocally gifted as a psychological provocateur, that she transcends the very notion of human rationale, even though most of her agendas lead to only carnal pleasures. That would be a hard sell by the standards of more thoughtful narratives, but in the hands of these filmmakers it’s only crude exercise. Consider one of the fatal flaws of the final act, in which Glass is torn between trusting the riddles of his patient and the vehement accusations of the detective. While this is all going on, Catherine is briefly heard in voice-over as she types away at what must be a new manuscript, where her phrasing is both shallow and unsophisticated. How are we supposed to believe that the same woman responsible for pitting a detective against a psychiatrist with such painstaking ease can barely form cogent written analogies?