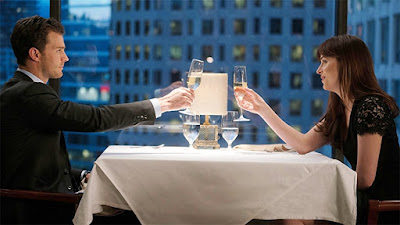 Perhaps it is a problem rooted deeper than in the muck of the moment. The story, written by E.L. James, began life as a fan-fiction off-shoot of the famous “Twilight” saga, about modern-day vampires and werewolves searching for romance amongst a generation of lovesick teenagers who confused foreplay with fatalism. Okay, so that’s not a promising platform, but let’s assume innocence; the venture was certainly monumental enough to inspire this film deviation, and the first entry, now famed as equally for its taboo sexual roles as it is for its mysterious love interests, did considerable business at the box office. But now under the command of a new writer and director who ought to know better, the fetishistic desires of the main stars have all but been stifled for a story that is arrogant and oblivious, lacking even the core momentum for a challenging thought process. To undergo what an enigma like Christian Grey has gone through is to suggest, at bare minimum, a study of deeper insights than what the scenario provides him. If he is a victim of crimes that have deteriorated his capacity to know the difference between pain and pleasure, one wonders what business any of these filmmakers have in exploiting his situation for thoroughly unattractive primal thrills.

You may recall (or not, I don’t care) where this all left off. After submitting to a painful and humiliating climactic encounter with her distinguished beau, Anastasia Steele (Dakota Johnson) is on the cusp of moving on from the sobering experiences of the first picture. Early on she is seen embracing the early stages of that possibility, including working at a high-profile publishing firm (under the management of a smarmy supervisor, for future reference), and becoming reacquainted with friends previously distanced by her eccentric affairs. But then Grey, the seemingly gentle Seattle billionaire who altered the course of her sexual evolution, returns nearly as quickly as the pieces seem to reassemble. Their stares suggest not so much buried feelings as they do unfinished business, but the almost breathy dialogue doesn’t cut too far down to the source of the issue; to them, and therefore to their creators, their distance is just a temporary maneuver to keep the sexual throb at a constant low rumble.

There is more involved to that exchange than I let on, of course, but so much of it is used as trivial padding. Anastasia can’t be with her conflicted beau, she feels, because his fetishes are dangerous to her safety. He can’t keep away despite her contrasting pleas, and he knows she still carries feelings. The magnetism, as it must, sets a tone impossible to pull away from, negating their need to have deep discussions about the issues initially severing their connection. Was he a victim of sexual abuse, or simply a blank slate in need of an expanded education? Are his active attempts to be a less controlling lover genuine, or is he manifestly replacing them with a different sense of authority that stretches outside the bedroom? The ongoing struggle becomes a staple of the clothed scenes as several side-conflicts loom beyond their periphery, including the arrival of Elena Lincoln (Kim Basinger), a family friend who turns out to be the dubious source of Christian’s many problematic obsessions.

Whether they are unhealthy is a discussion point better left to those who know more about the world of sexual fetishes than I (certainly I can reason with them being acceptable, perhaps, when shared with someone who consents with some level of prior experience, unlike Anastasia), but here is a plot so confused about the basic concept that it never finds its own consensus. What we are left with is a muddle of half messages wearing a mask of false confidence, giving the director carte blanche to move his characters from one shaky ordeal to the next without having to contemplate the ramifications. That also means potentially volatile scenarios are built up abruptly and disposed of far faster than they should be, which only adds to their implausible nature. Are we expected to believe it is possible, for example, that the conflict involving Elena can come to a head in one scene and then simply be resolved, without further mention, with some interjecting dialogue and a defiant gesture? Or that a subplot involving a former girlfriend stalking Anastasia can be squashed out in a mere five minutes, only after she winds up staring her adversary down from the opposite end of a gun barrel? Other isolated episodes include an attempted rape from her aforementioned boss (conveniently, he is never seen again after she makes her daring escape) and an ambitious helicopter crash that leads to nothing, other than the movie’s need to bait us with overly ambitious red herrings.

What do they even exist for? Foley’s motivation is all visual: he thinks the riskier the scenario, the more it enriches the interactions of his two leads and, therefore, the steaminess of the ensuing sex scenes. Both Dakota Johnson and Jamie Dornan are very attractive people who more than earn the distinction as objects of desire, but they are selling smut without intrigue. The movie is all pomp and release, and nothing about a relatable context. The foundations are there, perhaps, out of a genuine curiosity to understand them, but not a soul involved is willing to engage them as anything other than kinetic devices. Compare that incentive to what you saw in the earlier film and you begin to see the struggle in establishing this premise’s identity. I disliked the original immensely for a plethora of reasons, as did many others, but there was little ambiguity in understanding the subtext of its story arc. It knew what it was about, however wrongfully. Now we are given a sequel that attempts to disregard that conflicted destiny so everyone can spend more time in a state of arousal, usually after coming to the edge of incredible danger. Think about how depressing that sounds.