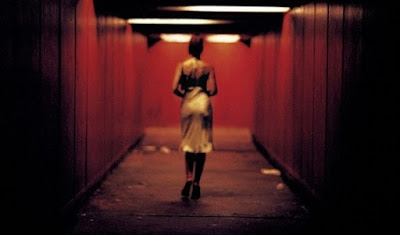 This is reflective of the subject matter as an instinctual exercise. If the act of rape is a curse that reverbs in the mind of its victim, Noé manifestly made a film that aches with parallel emotional sentiments. His is a nerve that wants us to see, experience, live in the suffering of the players for as long as they must participate, and then lingers long enough to encourage a study of their meanings. The most noteworthy device of his undertaking – the reverse chronology of the scenes – is not used as gimmick, either; capitalizing on what made “Memento” famous only a year prior, the technique is used to look doubtfully at the details, as if events preceding the cynicism give them a more pointed context (or at least cause one to pause out of bewilderment). Whereas most films about crime and revenge will build up to the acts with climactic jolts, here is a movie that opens with the cruelty, ends with happiness and forces us to deal with the horror in a light that is rarely considered during the course of a mere movie.

But first we must experience, in implicit detail, the crimes as they emerge. A calm – if revelatory – opening dialogue exchange between two men* in an upstairs apartment sets the tone of what transpires beneath their feet, at the front door of an S&M gay club swarming with cops. The emerging figures imply a violent scuffle: one, unconscious, is rolled out on a gurney with a broken arm, and the other appears from the doorway in cuffs while onlookers bellow sharply homophobic slurs. The two are friends bound by their love of Alex (Monica Bellucci), and in subsequent scenes we learn that they came to the club seeking revenge against Le Tenia, the man responsible for her seemingly near-death state on the dark streets of Paris. What he did, how they found him there and the certainty of his guilt are questions that are framed in the backwards pacing of the material, and answers come at the burden of a conflicted moral weight that is emphasized by backtracking into the reveries of their past.

It is also telling that Noé, a filmmaker ordinarily enamored by the grueling underbelly of human behavior, can effectively contrast the nihilism of the climactic events with an almost hopeful tone overlaying the story’s origins. Consider a scene involving Alex and Marcus (Vincent Cassel) that occurs towards the start of their fateful day. They wake together, nude and in embrace, discussing their friendship with Pierre (Albert Dupontel). He is Alex’s former boyfriend, and Marcus is skeptical – albeit lightheartedly – about Pierre’s ability to be supportive of the new romance. “I stole his girl from him!”, he quips with pride. And then they are seen being playful and loving, in a stretch of time that would be agonizingly dull if seen out of step with the more urgent elements of the film. Yet we latch onto them with an understanding that they indicate something profound, something to remind us of how to live beyond a future we now know is riddled in nightmares. They seem to violate the very nature that the movie is built on.

Perhaps it is this audacious ploy that allows “Irreversible” to remain agonizingly persistent in the mind while so many others have been buried by their own depravity. I was reminded of that prospect when I found the words to write about “A Serbian Film” last year, about a man who becomes ensnared in a pornographic odyssey of sadistic violence and torture. Of that picture I observed, “There is no cinematic science precise enough to classify this experience, no criteria sound enough to measure its merit (or its moral code).” It is possible that film’s director, Srdjan Spasojevic, was working from a blueprint formulated by Noé and later enhanced by Lars von Trier – an aesthetic, namely, that allows soul-crushing horror to exist in frames of painstaking artistic value. The lesser technical exercises – “Chaos,” for instance – are usually the works of slap-dash ineptitude, even apart from their questionable premises. We have no problem dismissing the geek shows of the uninformed masochists. But can we not offer a patient courtesy to a movie that allows the eye to see through terrible violence and sense the workings of a pointed moral philosophy?

Many – perhaps justly – refuse to feed that possibility. The movie’s centerpiece is a shamelessly deadpan rape scene that is among the most unflinching ever seen; in one long unbroken shot, the camera focuses on the Bellucci character as she wanders through a subway tunnel and into the path of a man beating a prostitute. When his gaze fixes on her, a struggle involving a knife ensues and she is restrained, beaten and violated over the course of countless agonizing minutes. If some possess a certain desensitized nature in relation to a plethora of films that have exploited the act, Noé inhabits it further with his technical austerity. Bellucci’s face is never out of focus. Nor for that matter, are the words of her rapist indistinct. The struggle is not done at a distance, either, which presents its own challenges for the actors – they must embody the moment sincerely, otherwise it cheapens any potential relevance of the approach. And towards the end of the ordeal, just when we think the torment has reached the end, a graver reality emerges: this is not a man who will allow his victim to walk away unscathed physically, lest she run directly to authorities.

Most movies see violence against women, rightfully, as an evil perpetuated by ambivalence. “Irreversible” complicates the matter with moral equivalencies. The earlier murder happens almost without conscious restraint; both Marcus and Pierre are so driven by a deep-seeded bloodlust that there is no time to comprehend their dubious deeds. But the hindsight of the origins – both horrific and gentle – seem to reveal darker agendas that populate the mind long after. Is the act of revenge, indeed, justified in a case like Alex’s, where she may never wake up from the ordeal? A critical detail easily missed in those dark muddy corridors sometimes forces us to double back on the observation. But that also comes at the sacrifice of certain closure. Do we want to know if the right man answered for his crime? If he doesn’t, how does that affect the later moments, showing the three in easier times at parties and in jovial conversation? The movie strikes such dichotomous tones at each end that we struggle to discover their central anchor. Certainly it exists – even in the clutch of this grim narrative – but does Noé really want to put such an agonizing gap between his audience and the meaning of it all? What is to be said of the dialogue exchanges early on, which might be construed as hateful and homophobic to less perceptive ears? Don’t they cloud the intent further?

Yet there is no denying the profound effect the movie continues to have on those who see it. The scenes are populated by the technical and artistic merit of a man who uses the camera to his advantage, not as a window into depraved nonsense. His performances are on-target, almost disquieting in how confident they seem. I am marveled as equally by the intricacy of the choreography of the violence as I am by the sheer beauty of the final moments, which leave us all but certain of a genuine intention beyond shock value. The key to understanding how they go together, I think, comes down to one’s ability to see love and hate as two measures of the same reality. Perhaps one cannot exist without the other. The title of the movie may provide a deeper insight – for those ruled by the gift of conscience, a terrible deed is permanent.

* One of the figures in the opening segment is not a random presence. Fans of Noé’s prior endeavor, “I Stand Alone,” will recognize the half-naked brute as “The Butcher,” that film’s primary character. The story he tells in those opening moments may reverb with some level of shock to the more casual observer, but those aware of the prior endeavor will see the impulse as far more pertinent – in a way the Butcher’s own terrible history acts as a bridge between the worlds of both movies, suggesting this cycle of violence occurs less by coincidence and more in intertwining destinies.

** Author’s Note: no star rating is being awarded to “Irreversible.” Much like “Antichrist” and “A Serbian Film” – both of which I also abstained from grading – this is a movie that exists outside conventional purposes and therefore must be considered such, even in a film review.