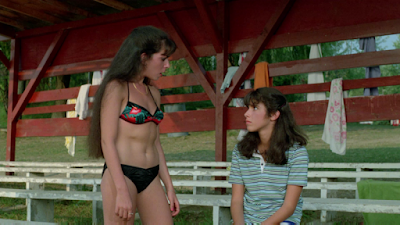 So why do so many still hold it in esteem, especially when dealt with by eyes that have been thoroughly exhausted by every lurid corner of this volatile genre? Educated guesses are an enigma easily contradicted. Consider some of the more prominent arguments that favor the film’s assorted details. The ambiguity of the opening tragedy is seen as clever in the way it obscures some of the necessary specifics. Fans laud the implication of human cruelty becoming a precursor to deathly punishment (nearly all the film’s victims are unruly sorts, not just innocent bystanders). The heroine is viewed as sympathetic and sincere, far above the reach of her more superficial peers. The danger is not exaggerated; many of the situations involve people who are genuinely menacing, and what happens to them is as grave as it is creative. And the shocking reveal of the climax, barely hinted at by earlier details, thoroughly rattled initial audiences in ways they had hardly anticipated. None of these assessments, alas, originate from an informed context; they are inferior examples that are devolved from far more creative predecessors, used only to conceal the implication that the director thought he could get away with spinning them into something unique. We could extend excuses to a movie that uses those ideas for something fresh and interesting, but “Sleepaway Camp” lacks all the prowess. It is a mechanical gimmick shamelessly playing against our need to be enthralled.

The road to that realization is straightforward. An opening scene involves two young children and their father bantering on a boat that they playfully capsize, leading to a terrible moment when a nearby jet boat loses sight of their floating figures and rushes straight through their path. The only survivor of the accident is Angela (Felissa Rose), who ages eight years and is seen only as a mute with sad eyes in further interactions. When she and her cousin Ricky (Jonathan Tierston) are sent off to summer camp in the present, neither looks at all interested to be there – she as a scarred soul clearly throbbing in emotional pain, and he as a supportive guardian whose time will inevitably be occupied by scaring off a relentless stampede of bullies and heartless onlookers. Ominous cues are provided early on by a flamboyant relative, who sends them to their destination with dialogue that seems to suggest darker secrets. Then their presence at camp is contrasted by the plot’s need to fill the periphery with teenage and adult antagonists. Two of the most notable: an ex-girlfriend of Ricky’s named Judy (Karen Fields), who taunts and torments with the relentlessness of an overacting scene-chewer, and a camp cook (Owen Hughes) who advertises his blatant pedophilia with amazingly tasteless dialogue (“Look at all that young fresh chicken; where I come from, we call ‘em baldies!”).

At a certain point each of these figures, cruel and thoughtless in their treatment of poor fragile Angela, also become the unknowing victims of a parade of mayhem orchestrated by an unseen figure in the distance. Their plight is not exactly serendipitous; even less educated minds in the audience will be quick to suspect a link between their fates and their unruly behaviors. But the greater question becomes whether we are to implicate Angela, who serves as the only common bond. Is she as innocent as she suggests? Do those perceptive, all-knowing eyes mask a greater menace lurking underneath? Or is she followed by a figure that has their own stake in her safety, like a steadfast protector well-versed in vigilante justice? The uncertainty of the answer inspires momentary intrigue as the picture bounces between elaborate death scenes and quiet considerations, and Hiltzik finds ecstasy in that prospect. As a loyal student of the great horror architects, his conviction is to inspire wonder as much as he hopes his audience will recoil from the reign of terror, hopefully while providing them with the right clues before the answers reveal themselves.

His problem, unfortunately, comes down to his lowly perception of those trapped in the seats below the screen. For any of this to work, viewers not only have to be perceptive but also naïve; they must be able to read between the lines of the dialogue and behaviors all while blatantly ignoring the sources all the clichés are derived from. Chief among the influences, of course, is Alfred Hitchcock’s “Psycho” – it supplies Hiltzik a framework so thorough that he never really strays from it, even when many of the key parallels run the risk of seeming like cheap imitation. We could forgive that for the sake of having a good time, and often have. Consider how “Halloween” essentially borrows many of its important impulses from “Black Christmas,” all while elevating them to something worth observation. “Sleepaway Camp,” by contrast, uses ideas at their lowest ebb of simplicity. We as devious onlookers of horror films grow to detest premises that don’t have a single original thought in their arsenal, but this is a rare film that takes as many as it can from others without spinning them into anything distinctive. It is paint-by-numbers from the first frame until the last.

And yet the material was successful enough to inspire sequels. How? To ask that question is to contemplate how any number of horror film franchises flourished throughout the 1980s – because movie studios were less interested in product and more enamored with cheap productions that could turn profit. In some ways that paradox persists even now, as most recently seen by the “Saw” films. An audience eager for cheap thrills is quick to turn up at repeated offerings, no matter how trivial. As I contemplate this context with “Sleepaway Camp,” I am almost forgiving of the more famous cousins like “Friday the 13th,” in itself a rip-off of “Halloween.” At least most of those films aim at the shallow end of the quality pool. Here is a tone-deaf slog through teenage nightmares that has the gall to assume anyone is interested in social commentary, especially when it is all formulated by ideas carbon-copied from more talented filmmakers.