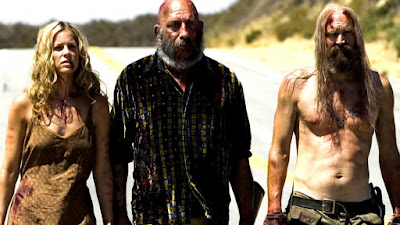 Zombie emerged in the recent years as a monstrous voice in the transgressive margins of cinema, and “The Devil’s Rejects” – itself a sequel to his debut, “House of 1000 Corpses” – is the greatest of his achievements as an avid novice. That’s because he finds a delicate balance between the relentlessness of the gore and the sincerity of the performances, which allows his context to rise above mere visual stimulation. What he discovers within this framework, furthermore, is a sly self-awareness that entices as thoroughly as it disgusts, and for nearly two hours we are hooked by a plethora of moments that ought to be the source of insufferable loathing. Far more experienced filmmakers have exhibited less conviction in more harmless examples, and yet here is a man who discovers a legitimate consideration of the violent nature of men while showing us their most deplorable deeds. What gives him the nerve, the sheer audacity, to keep ordinary moviegoers interested in material that ought to be sneered at with ravenous contempt? Rarely has our need to dismiss an idea been replaced so thoroughly with a morbid desire to watch on in fascination.

At some point we all know what we are getting ourselves into, however. “House of 1000 Corpses,” a movie I did not admire, was nonetheless apropos as an introduction to the suspicious tone of its creator – a visual circus of manic enthusiasm where all those involved seemed to be operating beyond the constraints of acceptable mainstream personality. Four of those dubious sorts carry over to the early scenes of this picture: Captain Spaulding (Sid Haig), Mama Firefly (Leslie Easterbrook, replacing Karen Black from the earlier picture), Otis (Bill Moseley) and Baby (Sheri Moon Zombie), members of a family who are lifelong ticket carriers on the crazy train. They are seen in a rare moment of peace at the start of the picture, having exhausted themselves after the killing spree from the prior film, when legal authorities descend on their rickety compound to engage them in a lengthy shootout. Zombie intercuts the bullets with loud but insightful dialogue exchanges that paint the cynical portrait of the accused, right down to almost gleeful awareness of their predicament; they certainly don’t want to be caught, but the prospect excites them in an almost fetishistic regard.

Unfortunately, during their flight, Mama Firefly is caught in Wydell’s clutches, inspiring a handful of early scenes in which they one-up each other in a series of interrogations that are ruthless, intense and unflinching. From them – and from a series of side-adventures involving the escapees terrorizing a group of stranded travelers at a motel while they await the inevitable catch-up of the cops – we see the characters lifted from one-note caricature to become genuine personalities, even in the framework of their crude limitations. Part of that value can be attributed to how Zombie allows them to talk; they are words that carry meaning, inflection, even sincerity. Spaulding, well-played by Sid Haig, intercuts underlying fears with astute sarcasm. Wydell, who may carry ulterior motives not yet known to the audience, pitches his warnings like sermons. Otis offers a bleak portrait with little room for misinterpretation to those on the other side of his gun barrel. To some degree one could almost accuse their director of allowing them to improvise much of what it is said, but how could he? As spontaneous as many of the exchanges feel – how else to describe a game of taunting between Baby and her victims that goes on in a motel room? – they are so well-timed that randomness seems unlikely.

But then the movie has even greater audacities that we barely expect. Consider a moment in the second act when Wydell’s team makes a pointed realization: the nicknames of all the “rejects” are stolen from old Marx Brother films, and they are inspired to bring a film critic in to offer an analysis. Do the names point to potential outcomes? Are they just used trivially, or could they suggest likely behaviors? The fact that the scene exists at all is a sly nod to Zombie’s own brand of humor; amongst all the spilled blood and guts is a man who understands the nature of his world, how it fits in the timestream, and what cinema has meant to his evolution through the trenches of his genre. If any doubts persist beyond the opening act that we might be dealing with a genuine work by a skilled provocateur, this isolated moment suggests the right note of wisdom working its way through the material. I found myself smirking even as the psychotic maze around these characters closed in like the walls of an iron maiden.

Then there is a climactic excursion so piercingly vicarious that it’s a wonder anyone finds time to question the moral complexity. When it becomes obvious to the rejects that Wydell has a legitimate axe to grind, they find themselves on the obverse end of their mayhem, in the hands of someone who has no qualms about inflicting great pain and suffering on those he has deemed unworthy. The disquieting nature of this act might have come off as shallow if not for Zombie’s surprisingly careful hand – the dialogue carries an undercurrent of grim psychology, the acoustic soundtrack is patient, and the bloodcurdling screams come not because of mere wounding, but of a thorough destruction of a character’s mental security (although pain inflicted by the conventional weapons is not absent from the mix, either). As I watched it all transpire, I was reminded of the blatant contrast of values between this opus and “House of 1000 Corpses,” which attempted to create similar feelings amid excess and overzealous sideshows. There was an endeavor of learning if ever a new filmmaker needed one. Now we exist in the clutches of a far superior outing that takes those sentiments and weaves them into a symphony of violence rather than a musical shuffle of it. “The Devil’s Rejects” is the exemplification of a man eager to tell his stories, finally, with a more methodical precision.