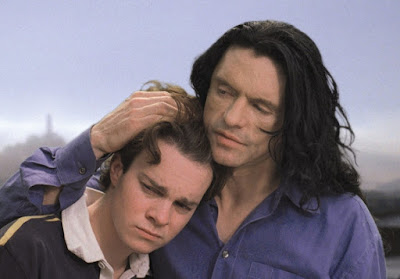 Somehow “The Room” eluded my awareness until recently, when it came to my attention while I was searching for subjects in a project about the worst of 21st-century films. Two viewings and an agonizing struggle with words later, there remains a strange inability in finding the proper way to describe the experience. What am I held back by? In times when the populace is intoxicated by attacks on creators rather than the work they produce, few criticisms here can be correlated to mere ignorance or laziness. This is a movie that is the product of a deliberate focus, labored over by a man who thought he was doing something worthy of his talents. And if we are to call what remains on screen a jaw-dropping exercise in stupidity, are we not, in a way, judging Wiseau himself, who probably meant to make something meaningful? Is it ok to make that assumption about a man who might not be able to separate the criticisms of his art with those of his person? The only way to deal with his opus substantially, on any level, is to assume a disconnect in intellectual sensibility. And that inherently makes any review of his terrible movie a redundant exercise.

What makes “The Room” the catastrophe it is so widely known as isn’t mere incompetence or miscalculation, though, but the conceit that it can be even considered a movie. Sure, we stare at the screen for 109 minutes, observing characters and listening to the dialogue they dislodge from their sleepy vocal inflections, but what does any of it amount to? The endeavor plays like a filmed experiment rather than a serious attempt at telling a story. We detect this approach in the early scenes. The film starts Wiseau as Johnny, a vaguely charming business man who is seen in a routine of coming home with flowers and lingerie for his fiancée Lisa (Juliette Danielle) before taking her upstairs and making love to her – usually in the form of slow montage. This turns out to be a repetitious device, at first with Johnny and Lisa (the angle at which the intercourse is choreographed seems anatomically impossible) and then later with Lisa and Mark (Greg Sestero), who are having an affair because of Lisa’s boredom with the other. Mark is also Johnny’s closest friend, which would complicate matters in any conventional dramatic narrative, but not so much here; Wiseau seems so possessed by the notion that his figures on screen must be doing something suspcious that he forgets the necessity of tangible plot device. It's a sleepwalk through filmic routine.

The movie uses that prospect to drive nearly every subsequent twist, all of them bad or lazy. During a playful encounter between Lisa and Johnny, their neighbor Denny (Philip Haldiman) joins in, and the dialogue (probably wrongfully) implicates him as someone who wants to participate in the sexual act. Lisa’s mother Claudette (Carolyn Minnot) bounces in and out of the apartment throughout the picture, usually to offer bad advice (notice how the actress’ eyes shuffle between cue cards and the action without any modesty). In an attempt to enhance the drama with action, Denny is given a scene where he is accosted by a drug dealer at gunpoint (he is never mentioned afterwards). Then, as the characters slog their way towards what ought to be a climactic wedding in which Lisa and Johnny’s relationship is either tested or torn apart, the ensemble exchange any variation of the following: flaccid platitudes; games of football toss (one example includes them all dressed in tuxedos, for no apparent reason); trips to the coffee shop (no one ever seems to have to pay for their drinks); more ventures into the bedroom (sex always happens against the backdrop of bad R&B music); blank stares during critical foreshadowing (a blind man could tell Mark and Lisa are carrying on behind Johnny’s back); and conflict resolution that involves the unending repetition of two key phrases: “Don’t worry about it,” or “I don’t want to talk about it.”

Countless observers have found pleasure out of this ordeal. I was merely exhausted by it. Wiseau certainly provides those eager for laughs a lifetime’s worth of ammunition here – one of the most infamous lapses in tone comes from a scene in which Claudette, without substantial reaction, reveals she has breast cancer – but they are anchored with an alarming sincerity of conviction. Sometimes that can be funny when the ambition is grandiose, but every element of “The Room” is cheaply realized, right down to a dented aluminum staircase, and makeup that looks as if it were applied to the actors by a stranger standing on the street corner. This isn’t unlikely entertainment, it’s unending paralysis. One does not merely sit there with a smirk of amusement, sensing the value of the time they have put into the incident. We sit there in the dark, our eyes move over flutters of passive motion, and eventually the screen goes black. That’s it.

What is it all supposed to mean? Not even a clairvoyant could reach clarity with this concept. Indications point to a laundry list of dependable dramatic formulas – including that ever-so-exhausted revenge gimmick utilized in a plethora of sleazy thrillers from the mid-90s – but that requires the far-fetched assumption that anyone involved had the capacity of reference. That would wrongfully imply some level of calculation, some familiarity with cinema. No, Wiseau and his ensemble of vague underachievers act as if they barely know to manage a camera, much less pitch their performances at an identifiable level. And that leads, of course, to a conclusion that works only because it signals an end to the ordeal – hopefully to the characters as much as us. Yet “The Room” continues to play to sold-out crowds across the country, wearing its moniker as a legend among terrible landmarks in movie history like a badge of honor. Those driven to consider the material as a hilarious excursion through the doldrums of absurdity should be saluted for their enduring patience. And when it comes to my lowly opinion? Don’t worry about it, I don’t want to talk about it.