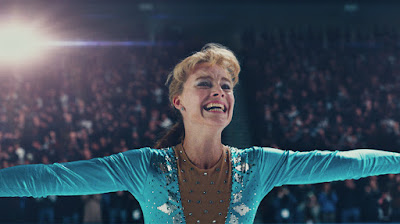 Therein lies the strangely absorbing foundation of “I, Tonya,” a rather perceptive little film about the creation – and eventual destruction – of an Olympic athlete who might have simply been too damaged to make it in an otherwise falsified world of sports etiquette. That does not, in director Craig Gillespie’s eye, absolve her of all responsibility of the scandals surrounding her, but in studying the figure he also comes to ask something far more important: why was she destroyed so quickly in the court of public opinion if the truth was clearly distorted? In a media culture where people are made to either be heroes or villains, hers was a chronicle destined for a tragic descent. But no other person knows the source better than she, and now she subjects her life to a semi-autobiographical scrutiny that finds sadness, strength and ultimately acceptance in the cards she has been dealt. And if blame must persist in the wake of her career-destroying indignity, the movie believes it ought to be shared.

Consider the early scenes of her childhood. On the arm of a chain-smoking mother (Allison Janney) who knows nothing of compliment or humility, Tonya is thrust into training as a figure skater – supposedly because it is her only interest, although one is apt to assume it’s because the ice is a dependable babysitter. As she finds joy in the weightless possibilities of mid-air jumps or fast turns, her mother is always looming nearby, in the rafters, usually to offer savage critiques of her moves (“You call that a clean skate, for Christ’s sake?!”). At first Tonya shows an ambivalence for the judgment; later, after a skill has been refined from years of practice, she turns it outward. Others see her not as a good figure skater, but a snarky bully who knows nothing of rules. The only emotion she shows, in fact, comes during a scene when she begs her dad not to leave her behind in a divorce, just before the car peddles steadily off in the distance – he is the lone figure of confidence in a life that doesn’t exist in any stretch of uplift, and his abandonment signals the end of her connection to good feeling.

Abuse persists. Tears are rarely shed. There is a startling moment when LaVona, her mother, mistakes a comment as backtalk and hurls a steak knife, inevitably providing the story with the roaring weight of its conflict. When she meets her prospective suitor Jeff Gillooly (Sebastian Stan), it hardly surprises her when he, too, proves to be a physical attacker, and Gillespie emphasizes Tonya’s tolerance by creating first-person narration over the violence (she stares at the camera to discuss the bruises, for example, while her face is held against the shards of a broken mirror). A discomfort overtakes the material, perhaps, because of how we traditionally perceive the act of battering a woman – in most movies it is to the service of a sociological reflection, or at least an eventual act of vengeance. But I suspect the director takes this approach to add a more direct sting; to feel as desensitized to these moments as Tonya does is to sense what it must be like to walk in her shoes, at least long enough to go down some of the more perplexing roads. All the while the film cuts between these acts with mock interview footage that shows all participants in a state of derisive impatience, as if having heard all these questions ad nauseam over the exhausting last few years (“we all know you came to hear about the incident!”).

That any movie could discover new slants on this material is remarkable. The Tonya Harding/Nancy Kerrigan saga was not exactly an episode isolated to behind-the-scenes drama, and cameras frequently moved within earshot of the noise as it happened. But “I, Tonya” avoids the conventional approach of retelling well-known history, I think, by intercutting the action with the interviews, given to people who look upon the past with a candid sense of acceptance. Despite the knee-jerk denials or deflections, no one really portrays themselves as victims – only bystanders who have answered for crimes they still have yet to contemplate their part in. Perhaps, in some way, that’s because they were also incompetent. Consider Shawn (Paul Walter Hauser), Gillooly’s closest friend, who facilitates the assault on Nancy Kerrigan using a pair of clumsy hitmen who know nothing of discretion. In any normal situation the act of causing such violence might have inspired silence, even hiding. But here is a man who willingly brags to strangers about ordering the hit and then seems totally surprised that the FBI catches up with him so quickly. Is he deluded, or suffering from brain damage? Gillooly is more perceptive – there is a great scene where he avoids giving himself away, knowing that his friend is bugged by the police – but not exactly farsighted; it never dawns on him that any sort of scare tactic against the competition might be in bad taste, no matter how out of hand it may have gotten.

Harding is not entirely sympathetic in this situation, of course, but the movie strikes an alluring balance that understands her position; after contributing to the plot to “scare” Nancy using threatening letters, she is totally awestruck when the situation plays out as it does, and even rats out her husband to authorities when she realizes his role in the event. Some would, rightfully, argue the idea never should have been discussed. Others would say it began as a rather minor prank, a tradition in a world where friendly competition often descends into threatening banter. But if people are conditioned to behave in such a way, perhaps it is the only way they understand. It becomes almost instinctual. That Margot Robbie, a relatively graceful actress, can pilot this role with a savage sense of enthusiasm is commendable. It’s not a glamorous portrayal. But she brings attitude and a shrewd sense of self-awareness to the persona, and by the end we are amazed at not only how impeccable the imitation is, but how much humanity she weaves into the portrayal.

If it is in our instinct to approach this subject with negative connotations, perhaps that says more about us as viewers than it does the people involved. A friend and colleague summed that strange dichotomy by making the following observation: “Most people don’t want to celebrate someone like Tonya Harding. It’s a lot to unpack. But if it were a movie about someone like Al Capone, no one would even ask those questions.” What that suggests, above all else, is that we are subconscious victims of a prejudice that refuses to find reasons for the bad behaviors of those in the here and now – especially those who were not exactly inconspicuous when it came to their involvement in terrible deeds. Are there contributing factors that add to that realization? Are we less interested in Harding because we already know so much, or because she was, essentially, a modern symbol of the white trash stereotype? Are we less interested because she is a woman? However you approach the subject matter of “I, Tonya,” all those involved seek to decimate the barriers between the public opinion and the truth of the matter. In the process they discover a very rich story, full of scathing honesty, and a woman who did the things she did because of the destructive influences that surrounded her.