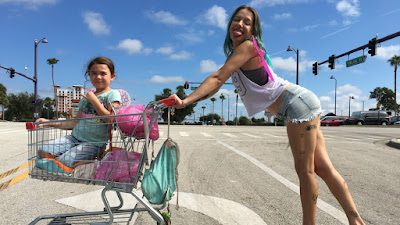 The movie is a startling analysis of its subjects. We descend into a dark theater expecting a social commentary, perhaps with some delicate mix of dramatic and comedic flair, and instead arrive in the company of characters who know little difference between the risk of their situation and the fearlessness of their daydreams, leaving us with an almost breathless consideration of the issues they endure. That is not so surprising to see in a film by this director – whose debut, “Tangerine,” was struck in the same mold – but to witness it in this way, with such careful precision, and in performances by children who are stellar vessels of emotion, is to witness a revelation. Almost no other film of the last twelve months has approached this one’s dramatic punch; without the spit and polish of the Hollywood machine, Baker has looked back at this material with a deadpan focus and found no illusions or double-talk – only an uncultivated truth impossible to turn away from.

Our cautious observations are contrasted by an almost alarming fearlessness in the children. The young star of the movie is Moonee (Brooklynn Kimberly Prince), a ringleader amongst a group of zealous children who lives with her mother in a rundown roach motel in the shadow of Disney World, where the underaged can wander freely among the fenceless neighborhoods and busy intersections without question. A routine emerges amongst a series of random episodes; she wanders to a nearby ice cream stand to beg for spare change (she and two friends take turns taking a bite out of the same cone), selling wholesale perfume with her mother on the corner of an upscale hotel (this becomes their weekly rent money), and venturing to the backdoor of a restaurant in order to collect thrown away food from Ashley (Mela Murder), who lives down the hall in the same motel. Day after day she is seen engaging in these rites of passage with curious glee, and Baker uses her sunny disposition to offset the gloom of the margins. To what purpose? If “Tangerine” is any noteworthy indication, an ability to find some semblance of humor in the bleak context of the character’s existence adds both unique emotional weight to the scenario, that way we are well armed to deal with any somber climax the movie chooses to pitch.

On and on Moonee’s day adventure in the streets of Florida proceeds, where specific actions play like walking the razor’s edge between audacious fantasy and mortal danger. Negative influences populate the outskirts of her attention. Adult figures, enduring their own struggles between one another, come and go without a pattern. Some yell, others look on with bemusement. Much of this is perpetuated by her mother (Valeria Cotto), who finds delight in her daughter’s rebellious tendencies, perhaps, because she has her own: she is a prostitute, gleefully wandering the streets at night while children are asleep safely on the motel mattresses. In lesser films that reality would supply the audience with a moral objection, but “The Florida Project” does something daring with that detail. It remains distant from it. We rarely see her engage with any number of her clients directly; the closest one comes to the camera, in fact, is just out of the line of sight, after he has wandered into the motel room bathroom and found Moonee ambivalently taking a bath. If the movie does that purposely, it is because the only view that matters here is that of the young child. She asks no questions, wonders not about better possibilities, because she lacks an understanding of the world beyond the cramped rooms and dirty stairwells. Sometimes you barely know you’ve been dealt a bum hand if you’ve never seen what the other cards have to offer.

Young Brooklyn Kimberly is not an established face in the movies (on the contrary, she was plucked from relative obscurity because Baker wants “real” people to populate his stories), but here is a performance that is as remarkable as it is natural. There is a critical moment in the climax when things come to a head and she shows, for the first time, a flood of emotion; the degree of her sincerity is so heartbreaking in that single moment that we question whether she was given cues by an acting coach. It’s as if she is breaking down because she genuinely believes these terrible things are happening to her. As an apropos balance, Willem Dafoe is sublime and confident as the impatient manager – whether he is berating the children for sneaking into electrical rooms, accosting the adults for late rent payments or cautiously looking after them in between maintenance chores, there is a degree of intensity driving him through this material, like a beacon of solidarity that must endure even when others exist to toss aside their own safety.

The final shot has been a subject of much discussion among film buffs for its perplexing detail – is it possible for two of the children to do what they do, or are they living a fantasy that has literally manifested before them? However you respond may depend on how you perceive the narrative before it. Is it purposely leading up to this sort of suggestive abandon? Or is Baker ignoring the logistics of the scenario simply for a feel-good moment? His film casts such a long doubtful shadow that his resolution has the capacity to derail the momentum, especially to those who are observing from literal motives. I accepted the final scene as a culmination of Moonee’s resilient sense of adventure; it is the ultimate goal in a life where daydreams are used to keep negative realities at bay. And in a moment where things become so bleak that there is nothing left to do but sob anxiously, where else could the movie have gone? What else could it have offered after nearly burying her under the compost of a hopeless living situation? “The Florida Project” will mean many things to any of those who see it – and it may even baffle some to the point of frustration – but there is never a doubt in Baker’s conviction. He has made a movie that cuts out the melodrama of after-school specials and found the profound contemplation lurking underneath.