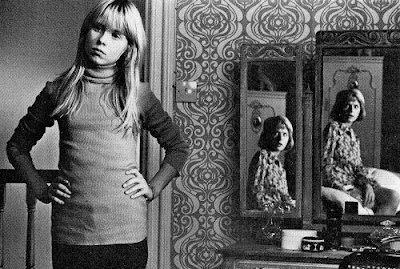 What makes these insights necessary is twofold: 1) the aesthetic created by “Persona” is now a fashionable commodity for a new generation of filmgoers who have been molded by the likes of “Memento” and “Mulholland Drive”; and 2) the underlying notion of his heroine’s struggle with a mental illness is more thoroughly understood today than it was three decades ago. Armed with these instruments of perspective, “Images” ceases being an elaborate or confusing enigma and emerges, after some serious contemplation, as a powerful embodiment of study – for identity, psychology, style, tone and how momentum drives them towards the high pitch of creative potential. Cast in the mold of striking originals, it has few peers and almost no muses – not even “The Three Faces of Eve” or “Spellbound,” two of the most well-known screen treatments tackling mental illness. Here Altman saw the rising tide of an ordeal first eluded to by Roman Polanski in “Repulsion” but faced it with a much more disquieting candor.

His quintessential force of persuasion may be in the casting of Susannah York, who pilots this engine with a deadpan conviction. She plays Cathryn, a raspy and colorful woman who is seen during the opening scenes swimming through long internal monologues while alone in her apartment. The words indicate she may be a writer of children’s books, although the film doesn’t exactly clarify, and trips to the typewriter seem infrequent. But they are details to guide the observation as she is moved into a routine that involves a great deal of uncertainty – at first with mysterious phone calls suggesting that her husband Hugh (Rene Auberjonois) is having an affair, and then a strange scene when she leans in to kiss him and pulls back to discover an entirely different man staring back. No time is spared to contemplate the strange events (are they manifestations of something supernatural, perhaps?), and sensing the anxiety in her demeanor Hugh drives her out to the countryside for a weekend of relaxing escape.

The ensuing events prove to be anything but tranquil, and here is where the movie splinters into dueling realities, each overlapping the other. Our awareness is awakened quite abruptly with a brilliant trick Altman plays on the audience in the lead-up: while on top of a hill looking down on the house that is to become her destination, Cathryn spies a car approaching the front driveway, notices that it is the same as the one Hugh has been driving, and silently observes as she watches herself emerge from the passenger door – as if peering into the near future. Then the movie cuts down to the countryside, with the other Cathryn glancing up towards the hill, taking notice of her earlier self. Is it a trick in the editing meant to establish a metaphor, or a ploy to undermine the foundation of the events? The very notion of its existence liberates the audience from any suspicion of dealing with a straightforward arc. Later, while Cathryn is setting up house as her husband moves in and out of the interiors, emphasis is placed on a shot where a camera lens inverts the image of a deer skull – further proof that everything we perceive may not be an honest depiction.

What exactly is she seeing? Experiencing? Consider the possibilities by taking notice of the alarming patterns. Cathryn moves between rooms as if leaving one life for another. Faces fade, bend, transform into entirely different personas; when the husband leaves, a strange Frenchman appears, mostly to leer over her like a predator seducing his prey. The dialogue transitions with a perfunctory gall that offers no important clues; though we do not know who this strange man is, she does, and insights are a redundant exercise. Then, just as we are convinced she may be creating elaborate illusions in her mind, two additional faces complicate the matter: Marcel (Hugh Millais) and his daughter Susannah (Cathryn Harrison), who must be real projections, otherwise Hugh would not be acknowledging them independently. The common denominator is that each person in this house, real or not, looks upon Cathryn as a vessel to satisfy their wanton curiosities – whether that is sexual, intellectual or emotional – and she takes a perverse delight in exuding a sense of importance. Sometimes that manifests as fear, sometimes violence, other times companionship. But there is never a sense that she lacks control of the situation, even when the possibility of a reliable record slips further into the movie’s impenetrable fog.

There is, unsurprisingly, an explanation to be found in any conventional synopsis of the film, but why spoil the momentum by leaping to the answer? Any theory we offer the material may indicate a more pointed idea of the events. For my sake, the mystery came down to a process of elimination. Was it possible, perhaps, that Cathryn’s experiences were the result of an identity disorder? Were these all people that lived within her, and occasionally were allowed control of the vessel? Her ability to communicate and act on them seems to negate that possibility. Then there is the implication of a tangible interaction while others do not sense their presence, implying schizophrenia. But how can that be if she is able to cause injury or harm, and it spills over into a literal reality? When she bludgeons one and spills blood, wouldn’t that suggest the traces of DNA never actually occurred? What about when Hugh returns to the house and wanders into the kitchen, leaving behind the same trail of blood that she thought belonged to the other? Is she psychic, maybe, if she can project herself into two entirely moments from two opposing vantage points? Is the answer less ambitious, and is she dealing with ghosts?

Altman takes pleasure in undermining a consensus. The title is apropos – these characters function in a world so devoid of simple ground rules that only the visuals can be used for insight. While there are subtle nods to cement the likelihood of a simple answer (notice how all the characters share the names of different actors in the picture, for instance), one piece does not always link to the next. Like a jigsaw puzzle with no edges, the movie extends its grasp without obvious boundaries. If many felt frustration in working with such confusion, however, their director was simply toying with a process at first conceived by Bergman, who saw such open-ended possibilities as a breakpoint between the eras of artistic nerve. That idea would take considerable practice to refine and perfect, and while his “3 Women” is a more profound film, the experiments going on in “Images” show a creator in ecstasy over destroying the conventional form. Traditional audiences saw nothing more than a collection of disjointed episodes joined by a razor-thin thread of reasoning. Yet no one could deny it was one of the earliest signs of his emerging confidence as a serious contender.

Altman went on to become one of the great American auteurs of the 20th century, and his list of accomplishments reads like an involved list of essential cinematic think pieces. “Nashville.” “McCabe & Mrs. Miller.” “Short Cuts.” “The Player.” “Gosford Park.” “A Prairie Home Companion.” To see any one of them it to come into the company of a mind that takes delight in overlap, complexity and natural curiosities, where they are rarely conformed to the mechanics of a two-hour excursion in camera frames. If “Images” earns a place among them, it’s because, like the great “Persona,” it was a product of denouncing the standard and touching on the nervous system of the medium’s deep-rooted possibilities. It is often said that most of his films resonate more deeply after several viewings, when the layers erode and reveal precious wisdom underneath. If Susannah’s volatile world strikes similar chords, we sense the key is not in arriving at a conclusion, but in having the audacity to wonder if there is a need for one.