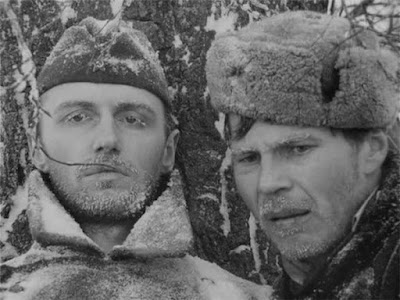 These allusions were not exactly tantamount with the time and culture. Born in the Ukraine and raised in the uncultivated embrace of communism, Shepitko risked her evolving career by slipping such references into a film that was, at its core function, a scathing denigration of the fascism ideal. At the time, the Soviet regime also relied on ironclad filters with films that might have challenged the image of Stalinism (or included blatant religious references). Yet her approach was so nuanced that the material, somehow, made it past censors and onto the world cinema stage, where its viewers would come to see it as a rare gem among tarnished treasures. Today it survives not simply because it has been kept in protective hands, but because it calls to us from an unmitigated stasis that sees the act of war, quite possibly, as the consequence of dangerous movements colliding inwards on each other.

Shepitko’s life was cut short only two years later, the result of a fatal car accident while scouting locations for a new picture. So young and gifted, her death seemed to ignite the suppressed passions of the most zealous new Russian filmmakers – especially her husband Elem Klimov, who would inevitably make “Come and See,” arguably the most confrontational anti-war film of the time. A student of the great Dovzhenko, her short tenure is widely accepted as the bridge between the two eras of eastern filmmaking, when a generation of new voices in the Soviet industry rose from the shadows of their indominable ancestors and saw the movie camera as more than just a dividing point between villains and heroes. The early war pictures belonged to a very narrow perception of Russians as victims (or, if the need arose, as liberators) against the villainous Nazis. Even “Ivan’s Childhood,” one of the more challenging early examples, functioned with an underlying sympathy for the communist position. But beneath the brooding, evocative frames of “The Ascent” trickled a wisdom that was shamelessly indirect, yet too undeniable to displace. To see it now in this age of clarity is to sense the painful confession of a woman who is not sure if either side is worth defending.

The story centers on the journey of two partisans: Sotnikov and Rybak, a pair of foot soldiers on the front lines of the German occupation in Belarus. The opening sequence, a long and nearly wordless crawl through a snowy hillside, shows them among their peers in a frenetic retreat while the enemy shoots at them from the distance. They scatter, return fire, and seek shelter in a thick glade of trees. In a rare moment of rest, the camera takes a moment to spy many of their faces – some exhibit anxiety, others seem battered beyond normal emotion. An immediate concern emerges: food is becoming scarce for the dwindling soldiers, and unless someone sets out on foot to collect provisions from neighboring farms, their numbers may be doomed further as the Germans continue to close in.

That task falls on men who have little in common other than their mutual need to survive. Long, meaningless exchanges of dialogue occupy the cold trek they share through the woods (“Talking makes the roads shorter”). Sotnikov begins having noticeable trouble breathing: a clear sign, perhaps, of early bronchitis. Their first stop brings them to the farm of a known Nazi collaborator, from whom they experience the first of many gray moral areas; a shy but stoic personality, he sulks in silence while Rybak’s scathing critiques pierce him like bullets. But that delivery also creates a fatalistic tone that persists well into the next series of stops, including one in the wilderness where Sotnikov becomes so convinced he will die in an ambush that he readies himself for a suicide, essentially because the idea of handling his own demise is less a punishment than falling into the hands of the enemy.

His problem, alas, is that few others recognize a concept other than selfish regard. As the hunt progresses, forcing the decay of their limited optimism, they eventually stow away in an attic of a woman’s farm while she attempts to distract an arriving troupe of Nazis, who are on the hunt for two men that were firing rounds at their soldiers nearby. An unfortunate physical impulse tips off the enemy, and this is where Shepitko illustrates how skilled she is at grafting tension: in an almost wordless passage, both the stowaways peak nervously over piles of hay while a German stares threateningly in their direction, using the tip of his gun to clear away obstacles. Can he see them? Will either react, or barely escape notice? The certainty of this scene’s conclusion is displaced, if just for a moment, by the film’s ability to keep pace between us and our knowledge of cliché. Somehow we forget there is probably only one end for the moment to lead towards.

What adds to the power of the film is illustrated by a hypnotic visual style underlining the performances. Shot entirely in black and white during a heavy snowstorm, the very look of “The Ascent” is a revelation: full of harsh contrasts and clarity, at a time when most war pictures preferred the livelier possibilities of technicolor. Her cinematographers were Vladimir Chukhnov and Pavel Lebeshev, and most of the key shots demand concentration away from the action and onto the human faces, where the film’s energy is firmly grounded. Consider, primarily, how Sotnikov indulges this prospect. Played by a young Boris Plotnikov (a frequent commodity in Russian entertainment), he has the tempered confidence of a man who recognizes the big picture of his situation, where death may not be so much the edge of the cliff as it is a release from a hell. So much of this sense of confidence informs the performance that we begin to see it as almost celestial, particularly in the more painful passages. The film is so enamored with this possibility that even the torture scene is handled with a disquieting rhythm; rather than show us the infliction of injury, the camera barely peers over the shoulder of the perpetrator, who stands between the lens and the victim. And once his composure fades away, the inevitable scream is seen rather than heard; the soundtrack drowns it out into a vague muffle of white noise.

The most heartbreaking shot uses a similar audacity. After enduring the pain and suffering inflicted on him by his captors, Sotnikov is barely kept alive in the basement of a compound long enough to hear the pleading cries of his fellow prisoners, who would do anything to escape the death that seems to await them. He recognizes these declarations not as selfish gestures, but as incentives to shoulder all the blame, and in the last confrontation with the Nazis he insists to absorb all their punishments during execution. Who lives and dies is secondary, for we know who the primary target is, and here the camera coldly regards its ill-fated figure in a hazy and unfocused closeup that cuts away well before the noose around his neck tightens; instead, the shot cuts back to the face of an onlooking child and lingers there, just long enough for a silent sadness to give way to a single tear rolling down his cheek.

In a way, that child’s tragic response is a manifestation of the feelings we have carried around over the previous two hours. No words, no amount of verbal consolations, are sufficient in deconstructing the painful certainty of these characters and their journey. Survival, for some, comes at a higher price: they must now live on as unfortunate witnesses to senseless destruction, sometimes cursed by the silent realizations that their selfish impulses kept them alive at the expense of others. What a terrible reality that must be to endure in, and how sad to realize that one’s conscience is far more easily sacrificed than mere survival. This sort of realization is contained in most good war movies, but usually buried behind the glitz and polish of a frenetic series of stunts or shootouts. Shepitko stripped all these qualities away and found, wandering among the frigid hills, two men who were destined to exhibit opposing ideals in the lead-up to a conclusive action. Only one of them is liberated from the burden of suffering, and it isn’t he who is left sobbing in the final frames.

"Lessons in Criterion" is a series of essays devoted to exploring the films released within the Criterion Collection on Blu Ray and DVD. Noted for their notoriety or importance in their effect on the evolution of cinema, these films are not rated on the 4-star scale in order to preserve the intent of the work, which is to promote discussion and inspire thought on their relevance in the medium. More information on this and other titles can be found at Criterion.com.

"The Ascent" is the nineteenth article in this series.