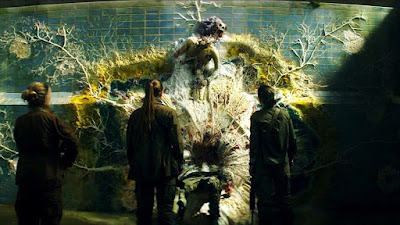 The ambitious, startling “Annihilation” is cast in the same mold. Here is a movie so thoroughly realized, so utterly entrenched in the harrowing ordeals of its characters, that their struggles touch on the very nervous system of our need to endure. But the movie is also more than a study of their psychosis, underlined by a triumph of production design and technical values that are unlike any recent example standing in the mainstream. One of the key sequences emphasizing this possibility is also the scariest: in the middle of a night after a group of scientists has found refuge inside an abandoned home, one of their peers makes a discovery about another that leads to a snap judgment, and soon all of them are bound and gagged facing down someone who is ready to punish their lack of honesty. But she is ambushed by what first sounds like a friend killed the night before, instead coming face-to-face with the creature that mutilated her. Why does it emulate sounds reminiscent of her voice? It is theorized that their environment contains some sort of physiological anomaly that allows DNA to transplant from one organism to the next, and now this bear’s roar contains a trace of the woman’s last horrific scream before being devoured. But the animal has also gone through such drastic physical changes that it’s as if the women are staring right back into the eyes of a demon rather than an untamed beast.

A little exposition will clarify the journey. The film stars Natalie Portman as Lena, a biologist walking hazily through everyday life when she is stirred by a surprising visit from her husband Kane (Oscar Isaac), who has been thought dead for months after disappearing a year prior during a covert military mission. His return is not joyous for long, however, when brief conversations reveal troubling fragments in his memories. He doesn’t know where he’s been, how he came to be there, or what transpired to lead to that moment. A glass of water on the table becomes an intriguing visual device from where we see a closeup of embracing hands become cold and disengaged, just as Lena realizes she is dealing with a return that is more foreboding than joyful. Then he drinks from the glass and leaves behind a small trace of blood, which immediately leads to a greater foreshadowing: he has not come home healthy or stable, but on the razor’s edge of an inexplicable illness.

A mad scuttle through the night in an ambulance leads to an ambush by military personnel and eventual capture, and the next morning Lena awakes in a compound being watched over by Dr. Ventress (Jennifer Jason Leigh), a stone-faced psychiatrist who reveals the scope of the problem: Kane was the lone survivor of a series of operations involving a strange zone surrounding a nearby coast, and now his organs are rapidly failing. What occurred to him inside this place, aptly referred to as the “Shimmer?” The first view of it from a distance implies something alien: a large, almost spectral bubble that gradually spreads outward, threatening nearby populations with each passing day. Is it dangerous? What occurs to those who go in but never come out? The lack of any conclusive idea is enhanced by the notion that nearly all its visitors have been armed soldiers. A new mission emerges: a group of female scientists, led by Ventress, will go into the Shimmer and explore its secrets from a less defensive vantage point. That Lena feels compelled to tag along for the venture – perhaps as a gesture of loyalty to her barely living husband – is obligatory.

The movie cuts between their journey and flashbacks as a way of painting a thorough portrait of its lead, a woman who once found happiness and willingly sabotaged it for an affair with a colleague (David Gyasi) while Kane was away on his mission. The pointed observations of a peer suggest one of the film’s underlying themes: we are, in some way, programmed to self-implode just when our trajectory seems set to the right course. But what of the course of the women during their strange journey? What brings them all there? The common bond is the notion of a mental wound, either inspired by deaths in the family, illness or addictions. Anya (Gina Rodriguez) is the recovering alcoholic. Josie (Tessa Thompson) cuts herself (“does it means she wants to die? Maybe the opposite,” a peer observes). Cass (Tuva Novotny), who comes across as protective, was once a mother whose daughter died, leaving her in a state of relentless emotional transition. And Ventress, who pilots the mission less like a leader and more like a passive mouthpiece, has no fear of the dangers – is something unspoken in her life already encouraging the acceptance of potential death?

Meanwhile, flash-forwards suggest Lena survives whatever ordeal she is about to endure; a gathering of scientists behind plastic barriers grill her on details relating to the mission, which may have gone on much longer than the actual experience indicates. Does that mean the Shimmer, in all its mysterious possibilities, alters the course of time? That would be the least of its offenses. A menagerie of puzzles continuously confuses the scientific reasoning of the spectators. They have no memory of entering the quarantined zone. Ordinary plants have merged into a single system, as if they have been cross-breeding with entirely non-functional families of vegetation. The animals, particularly the predatory ones, have become superhuman and bloodthirsty; when a white alligator is killed by Lena, she studies its teeth and discovers rows of them that ought to belong to entirely different species. A theory emerges that this zone may in fact be a biological prism, where DNA from one creature is refracted into that of a next (and that would explain a myriad of strange phenomena, including the merger of human forms with plant organisms). What does it do the human mind, however? And what sort of ramification would that have on the populace if allowed to spread? The greatest of warning signs occurs when the women discover a recording left behind by the last group of soldiers, who were driven to such striking insanity that they resorted to self-mutilation. Are these new characters chasing the same destiny, or does self-awareness now propel them towards the source of this paradox in hopes of neutralizing it?

The director is Alex Garland, an established screenwriter and author whose previous credits include the screenplay for “28 Days Later” and “Sunshine,” which now play like elaborate heralds of what was to come. His directorial debut, the well-received “Ex Machina,” was intriguing without always rising above the spark of its idea, but the core of its engine was thorough enough to inspire this excursion as a spiritual follow-up. Now he has made one of the more skillful science fiction thrillers of the last decade, effectively placing himself in the same company as Denis Villeneuve and Duncan Jones at the forefront of modern genre directors. That “Annihilation” grabs its structural inspiration from the likes of “Arrival” (also about a sad woman who descends into a mysterious study of alien organisms) and Tarkovsky’s “Stalker” (about men who too go into a strange “zone” to seek answers to the unknown) suggests just how serious he is about tapping into the sub-terrain of his subjects.

Yet it is said among some that the original distributors were at odds with the picture’s ending. Why? Was it because it didn’t underline the prior material with a conclusive finding? The consensus was that early audiences felt it was too vague and gloomy. Unsuccessfully they asked him to reshoot it for something more optimistic. His resistance to their demand for a change ultimately forced a strange distribution deal that affected foreign markets, where it played on the Netflix platform rather than theaters. His final audacity, however, is indicative of a voice who understands the function of a genre that exists primarily because there are no happy endings. Some may say the shimmer exists to challenge all that humanity knows of civilized process. So too does Garland’s movie function as a method to shatter the conventional cues that moviegoers expect of the formula.

I have also read this novel and now watched the movie on my spectum internet instead of cinema I am feeling like I should have watched it on cinema, it was an amazing movie.