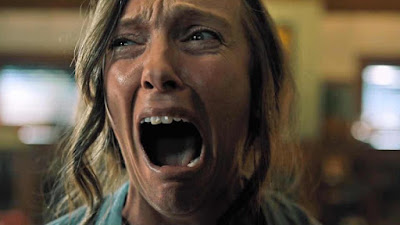 This reality comes, in part, because a direct path through the story is dramatically obscured. The movie begins routinely enough: a death in the family has inspired the mournful gathering of loved ones, each providing confessionals that serve as exposition, until one among them – a girl named Charlie (Milly Shapiro) – begins to exhibit signs of a psychic rapport with her deceased grandmother. The camera spies this possibility not with dialogue but with exterior shots; an eccentric introvert constantly tinkering with absurd gadgets, she routinely wanders off from home and into the nearby wilderness, usually while an aged figure gestures from a distance. Other events propel the mystery. At school, a bird flies towards her classroom window and breaks its neck; later, she ventures outside to cut the head off the carcass – it will become part of the toy she is constantly fidgeting with. An exchange between she and her mother Annie (Toni Collette) points to a bond transcending simple love, which also underscores the unresolved issues between the adults: Annie was not exactly fond of her mother, and in a moment of admission in group counselling she angrily accuses the dead woman of being the lone conspirator of a slew of unresolved family tragedies (these words will also forecast some of the later events).

So, far, the trajectory is a straightforward one: Aster has imbedded a conflict in the minds of damaged characters that will serve as vessels for his impending dangers, without much indication that they are unreliable or suspicious of more than just mere presence. But then the film detours, quite abruptly, to a high school party where Peter (Alex Wolff), Annie’s son, is required to flee the celebration and tend to his sister Charlie, who has inadvertently aggravated her dangerous nut allergy after having cake at the festivities. A moment so utterly shocking transpires on the road towards the hospital that there is no direct way to deal with it – not even for its lone witness, who is too paralyzed by shock to do anything other than quietly return home and slump into his bed. A grizzly discovery the following morning, meanwhile, is handled almost entirely off-camera; a scream pierces the speakers and we flash to a close-up of Peter, who knows what is coming but it too removed from the moment to see it as anything other than a blur in his now frozen memories.

The story moves back to Annie, who is balancing grief with newfound resentment. An artist working on miniature scale models, daily activities are typical and uninteresting, until her husband Steve (Gabriel Byrne) observes that she has shamelessly recreated the family accident in one of the new models (“it’s a neutral view of the event,” she insists). Phone calls from contractors offer the formulaic condolences interlaced with reminders of deadlines, but soon we realize Aster has not simply given her this job for the sake of filling in details – the act of creating, molding and modifying a miniature village may symbolize her need to exercise control over all things, including simple routines at home and in public. Steve resents these behaviors, often from distance, and is quick to note how her obsessive nature undermines her ability to deal with the unresolved traumas staring back at her. This leads to the film’s most dynamic moment, at a dinner table, when an unspoken tension between she and Peter manifests into a verbal explosion that goes beyond a standard release of emotions. As much as this family is bonded by a shared sense of pain, anger and hatred are the ties that bind them to their self-inflicted suffering.

Where is the movie leading us? For most of its running time, “Hereditary” moves to the motions of a journey towards acceptance, where the characters are asked to confront their grief head-on in acts of admission, protest, outbursts and even violence. Throw in the supernatural aspect and you fit the mold of the recent trend of ghost stories. But just as we think we have the central thread resolved, the material is altered by greater deceptive lures rising to the surface. Who are we to trust in the details, furthermore? Annie is seen as the primary conduit of the struggle, perhaps, but is what she seeing and feeling real, or does knowing she is a sleepwalker suggest we can never be sure how authentic the individual experiences are? Is Peter a more reliable observer, and do his eyes see a truth more absolute? How about when he senses the presence of the deceased in his room and then is ambushed by a set of hands above his headboard, as if they are seeking to decapitate him? Does this happen at all, or is this a projection of what Annie is doing in sleepwalk without realizing so? Is Steve more conscious than either of them, or more removed? Does what he sees go to the source of the issue, or is he only collecting pieces of the information? And what of a strange woman named Joan (Ann Dowd), who shows up to console Annie on her loss, becomes a good friend, suggests a drastic decision and then is seen in a late scene at a schoolyard reciting strange incantations?

The film encourages these questions not out of desperation, but through an almost obsessive quality in the details. Not content to simply fill his movie with loose ends or quagmires (or even remarkable performances, of which there are plenty), Aster shows his figures engaged in a plethora of odd quirks that at first seem like simple exaggerations… until you move closer towards a firm grasp and realize that they have pointed at other layers of reality. Notice, for instance, how Annie is constantly glancing at post-it-notes she has scattered across her miniature creations, containing conventional motivators (“keep going,” or “don’t stop working”). A common eye would see these images and assume nothing of consequence, but if we consider them from the vantage point of the climax, could it be they were directions from another, referring to other agendas not yet revealed? The most unnerving consistency comes in the form of sound, at first heard by Charlie, who clicks her tongue against the roof of her mouth as a manner of habit – later, after she is no longer the movie’s focus, that one sound seems to continue as a way of waging war against the sanity of the remaining figures standing in the foreground.

Above all else, these details provide the picture with the rarest quality of all: a sense of repeat value. So is not usually the case with many of the more recent scarefests, which are often addled by instantaneous jolts and deadened by foresight. Because we leave the theater never entirely certain about who is a victim or who has been complicit in this descent into madness, we are driven by a need that sticks with us well after the lights go up. In a way that puts the experience in comparison with the same pictures that have provided the director with his first-hand influences. Notice how the lack of a tangible, grounded reality echoes the mystery of “The Shining,” or how the plot seems motivated by the underlying devices of “Rosemary’s Baby” (including the ending). Of recent films that have seemingly held sway over the director’s fresh perspective, “The Witch” appears to be of primary interest. But whereas that film sabotaged its momentum with an ending that worked against the psychological connotation, “Hereditary” adds up to a greater sum. Not all horror movies can rest comfortably in the fog of a disturbing ambiguity, but Aster has found a compelling story worth telling from beginning to end, without the muck of ordinary procedure clouding his judgment.