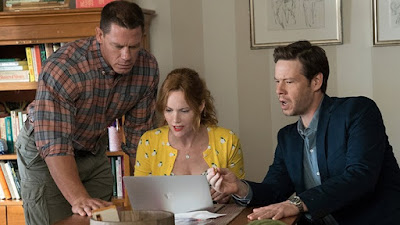 I, admittedly, chuckled – not in an uproarious or delighted matter, but in a moment of baffling awe. In the age of humor where all things come down to extremes, here are writers who have at least approached the material with something distinctive. Whether that sense of modulation is commendable, I dunno. And that sums up the collective experience of nearly every scene contained in “Blockers,” a film with modest aims that involves its characters, most of them clumsy or clueless, in a plot that can be summarized in a single sentence. But we do find time to be amused, however superficially, because the film’s visual audacity is rooted in harmless enthusiasm. That is far more than one can expect of recent theatrical outings, and in some respects the filmmakers have made a picture in the spirit of the early Farrelly brothers comedies, where a premise usually functioned as the glue holding together a mass of gross-outs.

A brief synopsis. Three girls who once met on the steps of elementary school have grown to become close friends through the years, leading them to a pivotal moment of a prom night that could signal the beginning of their blossoming adulthood. The early scenes involve a flash forward of their experiences not to highlight their bond, but rather to emphasize the commonality of their parents, who are obligated to become chummy for the sake of their children. Among them: Lisa (Leslie Mann), a single mother with abandonment issues; Mitchell (Cena), a man who dotes on his daughter like she is still a toddler; and Hunter (Ike Barinholtz), whose recent divorce has put an unfortunate emotional distance between him and his only child. There are brief episodes for each that suggest the commonalities and the divides of their bonds, although none of them are unconventional; the Kehoe brothers, Brian and Jim, have fashioned a screenplay that uses the ordinary as a launch point for the more ridiculous theatrics of the last two acts. The catalyst comes when one of the girls accidentally leaves her laptop open and the parents spy a private conversation filled with suggestive phrases and emojis, leading them to discover a plan in which the three hope to lose their virginity before night’s end. Set against the idea of them throwing their lives away, the parents embark on a search through town that leads them on all the typical side-adventures.

Simple enough, right? So far. But then comes the gradual discovery of the film’s underlying audacity, usually spied in scenarios where the parents argue or trip over their words while on the prowl for their children. Sometimes that even requires them to stumble into scenarios where the potential embarrassment is high, such as in one scene where they follow the trail to the house of one of the prom date’s parents, who are having wild and untamed sex in the front bedroom while the window is wide open; the parents at first suspect the suggestive thrusting belongs to one of the daughters, although that does nothing to restrain their spying eyes; soon after, their peeping tom tendencies are not seen as insulting, but as arousing to a pair of adventurous love-makers. Their presence will be replicated later in the story during a game of naked hide-and-go-seek, but not before the film involves us in such dubious events as revealing confessionals, a high-speed chase through the suburbs involving projectile vomiting, narrow escapes from exploding cars and even stowing away underneath hotel beds while they are occupied by potential rompers. And not only do we see John Cena’s rear-end while it partakes in the infamous butt-chugging sequence, it regurgitates too.

Why did I laugh? Perhaps for the same reason that so many others, clearly, did: the material rises above its juvenile limits because of the lively panache of its actors. As a trio of bumbling parents, Mann, Cena and Barinholtz have that rare sense of chemistry that makes simple dialogue seem lively, and they slip effortlessly into the quandaries that follow them through this relentless arc. Cena, in particular, shows he has a natural rhythm for physical humor, and after his turn in the recent “Trainwreck” may become one of the livelier commodities of wresters who have tried their hand at acting. If there is a fatal flaw to the engagements they share, it’s that the film cares little about the relationships with their daughters. Perhaps that is because they are a device in a plot that is concerned with the desperation of parents rather than the experiences of teenagers. Maybe it’s because the actresses, all fresh and eager, are pitching themselves in ways that seem dissonant with this sense of comedy. Or perhaps it’s because all their confidences, insecurities and dramatic throes seem labored to the point of calculation, right down to the obligatory final scenes in which they are required to exchange fiery words with the parents who have been following them through town. We can slice the dynamic in countless ways, but in the clutch of a film that survives primarily on the laurels of sight gags, they play like distractions from an otherwise absurd game of perversions.

The movie was directed by Kay Cannon, a first-time filmmaker previously credited as a producer on a handful of television sitcoms, including “30 Rock.” What she may lack in natural skill is, for the most part, resolved by a keen sense of observation; she has a natural way of catching her characters at the pinnacle of their most awkward moments, without always seeming too intrusive or demanding with camera movements. There is also a natural progression in how she stabilizes the momentum of the premise, treating the scenario less like a random collection of gross-outs and more like a steady build-up to them. Think of how a stand-up comedian plans their set, or the way a book creates effective lead-ins while storing the surprises for later. There is an order to “Blockers,” even when it seems headlong in the wilderness of its own bizarre allure. Some, I suspect, will do more than just offer a minor chuckle; they may be inclined to shower the endeavor with high regards for understanding the tradition of “Animal House,” which created great comedy out of characters before situations. This is certainly not a film as good or as memorable as that one, but it carries a similar spirit, and may herald the enthusiasm of entertainers who recognize the genre as the platform for smarter, more consequential laughs.