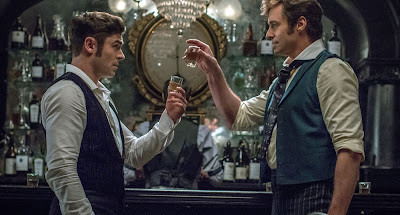 Sometimes the material is destined to find its most essential outlet. Mirroring the undercurrent of his own impassioned artistry, the film recounts the story (albeit a fictional rendition) of the great P.T. Barnum, who was credited with assembling one of the most enduring legacies of modern pop culture: the circus. More an exhibition of the eccentric rather than a conduit for escape, the essence of Barnum’s greatest contribution came down to providing haven for some of the oddest faces in society – people who were cast aside for looking different in a time where there could be little deviation from a specific mold. What rose from that premise was a deeply rooted incentive to enlighten as well as entertain: for a couple of hours, strangers could descend into the walls of the circus, meet startling culture wonders, observe as they performed in events that seemed rooted in magic, and lose themselves in a moment of pure happiness. It mattered not to Barnum that his approach was seen as crude or artless by his critics; among them were people seeking release from the pressures of daily life, where a round of applause felt like the evaporation of ongoing cynicism. Nowadays the circus endures precisely for that singular purpose, although its theatrics have undergone a decidedly strange evolution as showmen continue to push the dynamic away from the celebration and more towards the danger.

Nevertheless, “The Greatest Showmen” concerns a snapshot of time where optimism and inclusion were the values driving his engine. For a good duration of the first act, the film embodies that quality; Barnum, seen as a kid with audacity and then an adult with ambitious daydreams, assembles a gathering of players – loved ones, dissenters, players and spectators – that are destined to rouse his chutzpah. Obligatory obstacles dot the way, but nothing too unfortunate; when he loses his job at a bank because all their assets are sunk to the bottom of the ocean during a storm, he shrewdly claims them as collateral for a loan to open a museum. The real Barnum wasn’t always so precise a business man, although eventually the story comes around to supplying him a level-headed peer: Phillip Carlyle (Zac Effron), a local socialite whose prestige will be threatened if he partakes in the low-brow venture of circus performance. The bond of the key players is that they must arrive at a place where they can rise above the negative stigma surrounding them, ranging from protests to riots and even cruel assaults; they are, after all, the impulses of a society that sees midgets, overweight men, bearded ladies and mixed culture acrobats as freaks challenging their insufferable status quo, and who would dare submit to that?

Throughout these key discoveries, the characters often sing – sometimes in a fairly straightforward manner, other times in elaborate displays of technical dexterity. Their presentation is stirring; the director, Michael Gracey, has a thorough grasp of the technical lessons of Baz Luhrmann and Rob Marshall, who can be credited with givi8ng the modern movie musical the awe it had been craving. Here he allows those characters to move through the songs like commanders of a sonic voyage, and there is scarcely a moment when they don’t seem at home in the material. Some, we suspect, might have been written directly with them in mind, including a late number involving the circus stars where they speak of the value of inclusion. Or another towards the end, when Phillip and one of the show’s fetching acrobats must deal with the cultural barrier between their concealed romantic inclinations. There is a sense that all those involved firmly believe in the image they are selling…and why wouldn’t they? Aren’t these themes important, especially now, when films with innocent and pure agendas are becoming scarce as the certainties of prejudice are finding a second life in the mainstream?

I concede genuine affection for this approach. Movies like this, fully in sincerity with the mission, are a rare necessity. Yet they ought to realize their agendas beyond the conventional exchanges, too. Unfortunately, “The Greatest Showman” only takes the endeavor so far. All the aesthetics are there, and surely it will be easy for most viewers to connect with the themes underlining the music. But the plot loses track of its goals just as it gets started, involving us in very straightforward episodes for the first act until it abandons them in the thick of an absurd subplot involving a singer from Europe, whom Barnum uses to achieve a certain prestige in a world that sees him as a disposable provocateur. We could view this as palpable, perhaps, if his vessel had been more convincing; unfortunately, Jenny Lind (Rebecca Ferguson) is neither convincing nor all that special, and her singing would seem more at home in a network talent search than as the main attraction at a prestigious New York auditorium. Her presence, furthermore, highlights another fatal flaw that the movie desperately tries to avoid: the fact that many of the songs are not really all that melodic or rousing apart from their themes. What good is a musical, even a well-staged one, if we are leaving the theater without recalling much of the score beyond a few flutters and hums?

These reservations, of course, will mean little in the grand scheme. The film has earned a loyal fanbase and has even spawned talk of a stage production, and the lengthy tenure it recently experienced in theaters is a testament to how much it has come to mean to moviegoers. They see something in it that can’t be denied. You can say I was stirred enough, especially in the beginning, to sense the profound zeal of the filmmakers. They could have done much worse, I suppose – their cast could have included underachievers aiming for disinterest, or actors that simply could not sing a song to save their lives. The look of the film, moreover, could have been static nonsense, unable to pull back and admire the fanfare with precision. And it could have been all wasted if not for Hugh Jackman, who is a master of this material and rises well above basic intentions. No, almost everyone involved here was working in the full scope of their abilities. Perhaps one day they can even collaborate on something with more than just a shoestring screenplay.