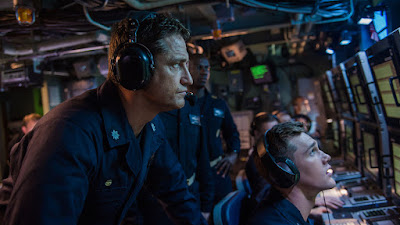 The root of Donovan Marsh’s film depends primarily on a series of overlapping arcs involving characters from different backgrounds, among them Navy Seals, military officers, politicians, advisers and rogue generals. Each plays the obligatory role in filling the map with all the necessary points of explanation, although they need not be; nearly every event the transpires, both in open water and on the surface, can be seen coming from a mile away. But I digress. The plot comes to pass when an American submarine is attacked off the coast of a Russian territory, without any obvious cue as to who or what hit them. Fearing a potential international conflict, Charles Donnegan (Gary Oldman), a stern political adviser to the American president, orders a group of seals out to investigate. Their leader: Captain Joe Glass (Gerard Butler), who has the staple distinction of being smart and perceptive underneath a monotone personality (his most important scene, involving a preliminary speech over the submarine’s intercom, is like a checklist of pseudo-motivational clichés).

Their search for answers leads them into the thick of an ambush: someone within the Russian president’s inner circle is attempting to start warfare with the Americans by making them look like instigators, all while holding their own leader hostage to prevent mediation. Circumstances trickle through the scheme that lead the seals into the company of enemy survivors aboard another submarine, whom they save, and, for subsequent reasons, wind up using as assets to infiltrate the compound and save their captive president. In some roundabout intellectual way all the details fall into place well enough to negate skepticism, although it’s possible that “Hunter Killer” may be one of the more ludicrous of recent political action pictures: 95 percent of possible outcomes would almost certainly lead to failure, if not for the face that everything falls into the hands of people who are persuasive in negotiations, skillful at planning, or just plain brilliant at dodging thousands of rounds of gunfire.

So why does a movie like this work at all, even though every frame permeates the conceit of a tired tradition? Because Marsh doesn’t orchestrate his picture with the cognizance of a defeatist; he is more interested in supplying the material with pure energy and tension, all while keeping the more obvious elements cloaked in a clever haze of technical focus. The movie is just over two hours but moves with the pace of something much shorter. And if his inspiration stems from any noteworthy examples of recent times, it is clear Chris Nolan’s “Dunkirk” has had the most profound effect; both films establish their context of their premise in the margins while the urgency of the situation dominates the foreground. I took some level of pleasure in that with Nolan’s film, mostly because his was functioning in the embrace of pure film value. “Hunter Killer” isn’t nearly as ambitious or clever, but it need not be. It has one aim, and reaches it.

The actors, for the most part, establish a comfort with that goal. Butler is hardly swimming against the current of his skill – his characters are usually either smarmy, sarcastic or deadpan, usually the consequence of some prior trauma or experience – and here he holds firm with that distinction. No other prototype would have been a better fit here; the screenplay asks for a man whose prior experience must have hardened him enough to be quick-witted in dire situations, and the casting director made an ideal match. Oldman, on the other hand, seems stuck in the residuals of his recent Churchill performance; the orders he barks are pitched with a zeal that is overstated when unnecessary, as if chewing scenes just for the sake of proving he was there. In contrast, Common plays an admiral whose conviction and delivery seem trapped in separate orbits. Consider the fact that he talks with almost no inflection in his voice, yet somehow possesses the foresight to suggest a rescue of the Russian president that would be a tremendous maneuver against his impending coup. Are we to believe this is possible, or at least tangible enough that he is the only one who sees it as a risk worth taking?

The screenplay by Jamie Moss and Arne L. Schmidt is not a stupid one. In a movie that demands some level of clarity amidst a chaotic show of shootouts or explosions, they hold their own on providing the moments with some level of exposition. Motives, by the same token, are rarely in doubt, perhaps because a story this tense wouldn’t be able to handle much ambiguity on the loyalties of its characters. That is a simple concession that I accept, regardless of ramification. A movie about this level of intrigue, filled with these sorts of scenarios, could have just as easily collapsed under the weight of nonsense and confusion. Yet it also could have been far more original, if for no other reason than to remind the audience of the panache of ambitious new filmmaker currently rising through the ranks in the studio system. Donovan Marsh is not one of the more familiar names in today’s industry, and sometimes the best way to make your case is to do so with a more audacious selling point. Maybe he has something far more rousing in him. As it stands, however, his “Hunter Killer” is amusing popcorn entertainment, far from being earth-shattering but competent enough to be worth a glance on a weekend matinee.