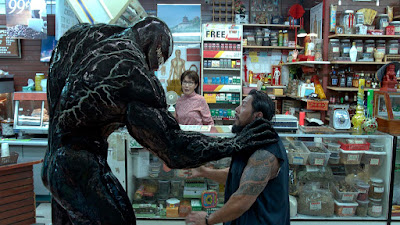 What the movie goes through is less a technical glitch, alas, and more systemic of the changing patterns of Hollywood’s mainstream technicians. As special effects evolve and studio budgets increase exponentially with each passing year, so do the standards of basic coherence begin to lose focus. Individual shots get shorter and shorter. Dialogue becomes simplified, almost painfully transparent. And camerawork, often at the service of hiding details that are vague at best, becomes much harsher and manic. The system is designed to appeal to the eroding sensory distinctions of moviegoers, who have been assaulted by noise and nonsense for the better part of twenty years, and to slow down the process for any duration is to leave them bored in their seats. Perhaps “Venom” embodies that quality because its creators are the byproduct of the “Transformers” generation, where clarity is unnecessary to the emphasis of the sensation. Maybe they are simply furthering the cause of other comic book movies, which now predominantly involve great threats to entire civilizations. In any event, a movie that pushes any intellectual connotation warrants much more careful and precise technical values. Halfway through this film and I was ready to pop an ibuprofen.

The story exists as it must: to setup an overreaching arc that could, at some point, be integrated in a much broader story with sequels and spin-offs. As far as origin stories go, however, there’s a lot of promise. Tom Hardy plays Brock, a sarcastic and savvy journalist whose reports have the edge of an independent thinker, without corporate oversight or money dictating much of the content.  That changes suddenly when he is asked to interview Carlton Drake (Riz Ahmed), the CEO of the Life Foundation, for the purpose of easing public concern about a spaceship crash-landing in East Malaysia. Brock, convinced that Drake is crooked, changes the scope of his interview to be damning. This sets him up to become the target of a series of unfortunate events, including his firing, the loss of his lawyer girlfriend (Michelle Williams), run-ins with random thugs and, eventually, into the laboratory of the very same foundation he was just at, where Drake is performing experiments on humans and alien beings that were recently acquired from space.

We have a hint of what they are capable of from the early scenes. The Malaysian incident is seen briefly as a launch point for bizarre scientific wonder, when one of the passengers walks freely from the wreckage after apparently playing host to one of the escaped beings. Though we don’t exactly see the manifestation – at least beyond changing eye color –the physical possibilities are there: a stone-cold face, little regard for authority or pain, and bystanders that are frequently thrown around like rag dolls while it moves through crowds towards some undisclosed location. Occasionally the film will revisit the alien to discover it has acquired different hosts, and each appears to be on a mission towards travelling towards San Francisco where its peers are being kept – to do what, who knows, although the most conventional doctrine of comic book mythology insists that every path must lead right back to a hotheaded protagonist, who is destined to be a key decision maker in their strange destinies.

Meanwhile, the movie supplies him with human characters that are of a considerably lesser value. Michelle Williams is a charming and gifted actress, no doubt looking for something fun to do in between more serious subjects, but her role as a fiery love interest is written to the detail of a dime store pamphlet; she is simply in the scenes to supply Brock with a sense of purpose beyond the fragility of his ego. A bigger offense – and a crippling one – is the villain Carlton Drake, who is almost insufferably smarmy; all his dialogue is pitched at a level of implausible sincerity, and poor Riz Ahmed looks uncomfortable through an endless ordeal of patronizing speeches and radical scientific agendas. Were they given anything to work with beyond script pages? Any backdrop, any sense of context or suggestion? A good sense of story support can rise from wit, but not at the expense of an edgy threat or a believable consequence. The final act of the film is so detached from the weight of the climax that not even the alien’s poor host seems bothered by a negative outcome.

The silver lining, I suppose, is that we enjoy our time with the Venom being. An interesting dynamic plays between he and the Brock persona, full of all sorts of angst and uneasy humor, and Hardy has a lot of fun attempting to portray two opposing sides of a conflicted persona trapped in a single body. I especially enjoyed watching him learn to cope with the anatomic invasion, especially when it became ravenous and started eating the heads off random strangers; the delivery had the sort of joyous panache that made the Deadpool character so fun to spend time with. In a better film, where supporting players could be well-drawn individuals and photography was modulated by steadier hands, we would have been happy to see their banter continue well beyond the chases or deadly fights. A sequel will be surely be made, although if the filmmakers are smart, they will ascertain a more resonating wisdom before then: there is little point in creating so much volatile chaos if no one below the projector lights isn’t able to see any of it clearly.