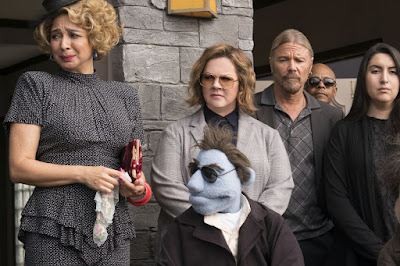 Their inspiration likely came from the success of recent irreverent genre pieces, the most obvious being “Sausage Party,” an adult cartoon about foul-talking slabs of poultry who engaged in social interaction at the supermarket (among other things). Though I was among a respectable number of viewers who branded it one of the worst movies of the century, it did have its admirers – enough, certainly, to produce respectable box office numbers and inspire a crop of avid filmmakers searching for their own slice of the same saucy pie. At least you can say talking sausages had somewhere to go with the concept – someplace utterly terrible, yes, but a place all the same. The puppets in “The Happytime Murders,” unfortunately, exist primarily to repeat the same series of foul gags ad nauseum, over the course of an hour-and-a-half where no one gets any closer to partaking in a story (or point) that makes anything worth our time. Are we really supposed to be in joyful uproar when puppets engage in loud sex at the office and then orgasm beneath the desk with exploding silly string?

Let’s illustrate the point further. The premise – if you can call it one – deals with a murder mystery involving the cast of a now-defunct Saturday morning children’s show, which once involved a handful of puppets living in a house with a cheerful young blonde (Elizabeth Banks). Years have passed since its cancellation, and now the cast members are being one-offed in gradual succession by an unknown assailant in a cloak, perhaps for a very valid reason: a recent syndication deal promises money to all the participants, but if any of them die, their share of the money will be split amongst the survivors. Naturally, this clause must pique the vindictive side of someone among them: if most of them die, then it stands to reason the monetary benefits will be massive for a lone survivor. A police investigation ensues involving a wisecracking agent (Melissa McCarthy) and her former puppet partner Phil (voiced by Bill Barretta), the first puppet to ever have a job in law enforcement. They are estranged in all the conventional ways, which include profane banter that is meant to seem awkwardly impromptu, but of course they must work together through the investigation and, naturally, come to terms with their disagreements through semi-sincere apologies and close calls with dangerous distractions. How utterly humorous, right?

The gimmick is that the puppets are not actually just avatars for the moving hands of ventriloquists, but fully living and functioning members of society who endure on their own. Unfortunately, being at the shallow end of the cultural pool means that humans look at them as disposable, and this has created an underlying resentment in them that manifests destructively, usually in profanity-laced tirades or seedy behavior (one is seen late in the movie offering oral sex for cash). I guess this gives them license to become vulgar motormouths. Unfortunately, no writing has ever been perceptive enough to make anyone – even an audience at an audacious comedy – buy the idea that humans and furry puppets can co-exist in any realistic society, unless the humans were all patients in a dementia ward. Writer Todd Berger certainly senses this prospect, otherwise he would not have been so determined to simply skip past all the obvious questions and plunge us right into the muck of the story. But boy, oh boy, does he give us some whoppers here – how creative can you get, for instance, if you’re a mass murderer going around and picking off puppets, who are fully of stuffing and weigh almost nothing? Consider this precious moment: at one point, a puppet is torn apart by dogs near a hot tub, which then necessitating this line of precious dialogue in the ensuing clean-up: “no one turns my brother into a chew toy and gets away with it!” Did anyone think to wonder how many puppets would actually be left alive for a movie like this if canines are the most common domestic pet in Los Angeles?

Melissa McCarthy, who has become one of the best of the modern comedians (and actually has made enjoyable movies), is buried alive in this concept; she throws every familiar schtick she can at the screen, hoping something will stick out, but in scene after scene she is weight down by the ball and chain of a razor-thin plot. There is almost nothing interesting for her to do, save for a chance moment when she can run with a setup and deliver one of her signature brash punchlines (the one funny scene in the movie: her running through a list of gripes with fellow police officers as she is being fired from her post). Can’t we simply see this delivery elsewhere, though, without the burden of being surrounded by a bunch of nothing? Of course. So, too, can we catch poor Maya Rudolph in something more thankful; here she is used to provide sidekick relief to would-be comedians who are never funny, but lean obsessively on her to provide more humorous incidental wisdom. I loath the very notion of seeing smart, competent performers like these working in lockstep with the motives of underachievers, and to see any of the familiar faces in “The Happytime Murders” is to get a sense of what it must feel like to have your trust betrayed by those you felt a loyalty from.

Picture something more unfortunate: the film’s director is Brian Henson, the very son to one Jim Henson, who was the literal architect of this entire childhood culture (his credits, among the creation of the Muppets, included “The Dark Crystal,” which still goes through late-night revivals). What was he thinking attaching himself to this, a movie that basically takes a giant crap on the very family legacy he has been charged to guard over? Perhaps, in some way, he felt an obligation to at least oversee some element of the puppetry, which is at least competent. Maybe he felt that was his way of softening a blow on those who would otherwise sneer at the ridiculous show going on before them. I dunno what the primary motivator was. What is certain, especially at this point, is that no amount of experience with these furry creatures is enough to keep this sinking ship afloat for long. There is a moment towards the end where Phil, dejected at having been blamed for the murders going on around him, regards his situation with sadness more than horror or frustration. Just think how he would feel if he knew he was the lead in a movie that would rather burn him to cinders than give him one funny line of dialogue.