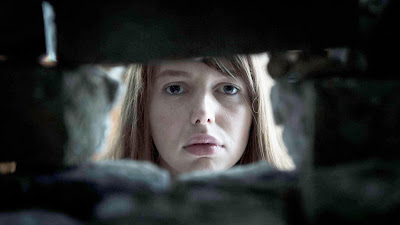 The missing catalyst is, obviously, an estranged marriage. The mother is Sarah (Seana Kerslake), and in the opening shot she is driving she and her son Chris (James Quinn Markey) out to one of those random houses sitting atop a hill overlooking the wilderness – you know, the sort where the abnormal and creepy has the occasion to manifest. After the aforementioned incident with the aimless old pedestrian, they set up the expected routine of silent discomfort in between childish pastimes and arguments. Chris is confused as to why his dad isn’t there with them. Sarah offers no explanation, but a distraught side-glance points to separation or divorce. No matter, the director indicates; after an argument escalates by Chris running into the forest, Sarah follows him and is nearly swallowed by a gaping caldera sitting in the middle of a clearing of trees. How did it come to be there? Why does is create negative suspicions in her, just by its mere gaze? The discovery is all but forgotten after mother and son are reunited, and they return home to their marginal routine.

The hole is a tool, of course, to foreshadow strange behavioral changes in Chris, who once again disappears and is found after the fact by a panic-stricken Sarah, fearing he has gone off to investigate. When he is rediscovered, however, she finds him almost alarmingly quaint, as if under the influence of mood stabilizers. He begins getting along with children at school – a total reversal from the boy who felt like a stranger amongst his peers. He eats everything she cooks without fuss, and even seems sickeningly saccharine in the way he refers to her as “mommy.” Maybe it’s just an attitude adjustment, she suspects. Maybe he is simply trying something different after being fussy for the whole duration of their trip. Then the film has them both cross the path of the same lonely old woman from the earlier scenes, whose history is tragic: she accidentally killed her own son at a very young age and has been rendered an aimless mute in her long-standing grief. This time, she does not remain silent: after catching a glimpse of Chris in the passenger’s seat of the car, she ominously suggests: “he is not your son.” That provides Sarah an underlying cue to gradually become convinced he has been replaced by some sort of alien life form, which becomes more possible after the old woman is found dead with her head buried in the dirt shortly after.

Lee Cronin, whose only credits include a handful of short films and secondary participation in others, is one of the more obvious admirers of modern thrillers. His material indicates an exhaustive study of mood, theme, psychology and technical wizardry, right down to the way he mutes the color palette of the more foreboding scenes and then shoots at low angles when threats seem manifested in the foreground. Those studies amplify what might otherwise seem like an ordinary excursion through the creepy recesses of the demonic child formula. Unfortunately, one wonders if he stayed awake through some of the more reputable endeavors long enough to understand their notion of exposition. Consider the many parallels this picture draws to “The Babadook,” and then contrast how deeply rooted those characters seem in our minds in comparison. They were people fighting for something amidst their internal chaos. By comparison, poor Sarah and Chris seem to be moving through the motions mechanically, thrusted by a need to thwart the danger around them without every understanding it, or each other.

A brief subplot that develops in the second act emphasizes the short-sighted motives of his story. After the old woman’s tragic death, Sarah shares a private moment with her widow James (James Cosmo), who looks as if he hasn’t smiled in decades; he recounts the tragedy of his own son’s death and his wife’s speedy mental deterioration in what must be described as the most detached monologue in many a recent horror film, all while standing over – get this – her open casket. Sarah gathers this information not as insight, but as fodder to fertilize her own growing suspicions; later, she shows James pictures she has taken of Chris – maybe film reveals the truth behind the flesh? – and is compelled to repeat the dead woman’s script, who too thought her own son was a different person and may have used the feeling to motivate the tragic accident. James is distraught by what he apparently sees in the picture but stifles her loudly, before turning back in one last shot to indicate that, yes, he believes she may be right on the money. But do you think the film is smart enough to shed more light on their exchange – or better yet, use him in an impending climax that may verify her fears? Of course not. After he leaves the room, he is never seen again.

Nearly all the movie functions like that: people wander into rooms, say things that suggest dark impulses, and then move onto the next scene without linking past references with present actions. That means what we get with the climax is a series of violent exchanges that are necessitated by the formula rather than a natural narrative progression. How could they be anything other? The movie wants us to reflect on the bare minimum, and not to any point of mystery or intrigue. Watch how quickly Sarah’s obligatory descent into the giant hole in the forest is handled; the scene is promising enough, with all the right technical modulation, but so brief that her discoveries are an inconclusive in formulating a theory. Then, when she must reckon with the face that may not actually be her son, the film takes the cheap way out; it resolves the last moment off-screen before flashing forward a few months after all has been resolved. Think of what it must have gone through the heads of the financers listening to this pitch. Were they convinced something meaty would manifest in between all those plot details? Were they convinced audiences would be happy with something that left room open for interpretation? “The Hole in the Ground” shows a promising talent finessing the notes of his song without formulating it into plausible music.