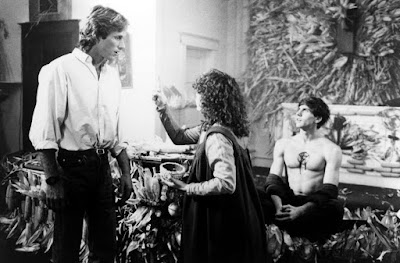 Little can be said that is unique to the experience of enduring the infamous 1984 adaptation of the Stephen King short story, but I am about to make an audacious concession: this is not a story that was ever destined to work on film. Oh sure, some have proven successful at exploiting the devious natures of young villains, dating back to Wolf Rilla’s classic “Village of the Damned.” But the crucial flaw of King’s story runs deeper than just accepting children as monsters. It diminishes their capacity to absorb and learn. Consider the narrator, a young boy who observes, often with disdain, at all the terrible realities occurring around them. He is a first-hand witness to throats being slit, traitors enduring mutilation and former friends turning blank gazes onto those who would otherwise seek guidance or nourishment. He does not conform to their ways because a child’s nature is not to become a monster in a short sweep of time. So how else are we to explain the film’s title offenders? Are we supposed to be convinced that all of them can be made so blind, so trusting, of a stranger who demands the sacrifice of their parents to some unseen force lurking behind rows of corn? Madness, in any form, is created through long stretches of abuse, lies, and exposure to horror. To assume that people who have barely reached puberty can automatically arrive at that stage is to create a psychological subtext founded on totally illogical principal.

As this underlines the source material in a veneer of implausibility that only aggravates the experience of the movie, which would be shoddy and unconvincing enough on its own. The lead characters are Burt and Vicky, a couple driving through the Nebraska plains when they inadvertently run down a lone young boy running across the highway. At first they believe they have facilitated a rather drastic fatal accident, but closer investigation reveals darker details: before he emerged from the nearby corn field, someone apparently slit his throat. We, of course, know this already; the preceding scenes show him in a mad dash through the fields towards what he hopes is an escape, right before someone intercepts and causes the fatal injury. This leads the adults on a familiar detour in which they are advised against going into the nearby Gatlin, wind up there anyway, and start to investigate strange and disturbing realities. Among them: a sweet and innocent little girl named Sarah is playing upstairs in an empty house, without any adult supervision. How long has she been there? What secret is she keeping? Better yet, is the lack of adult supervision indicative of a great problem stretching through the desolate neighborhoods nearby? Any normal conclusion in this scenario would conclude with a call to child protective services.

Alas, nothing occurring in “Children of the Corn” is anything resembling normal, and soon Vicky is cornered upstairs by a mob of angry teenagers while Burt is out scouring the streets. Their agenda: to sacrifice her to their deity lurking in the corn, simply by placing her atop a crucifix assembled out of – you guessed it – corn stalks. Unfortunately, a brewing conflict between Isaac, the crazed pastor, and Malachai, the teenage rebel drunk on bloodlust, escalates and intervenes in the impending sacrifice; Isaac replaces Vicky on the stalk and is soon absorbed by a cartoonish special effect that comes bubbling out of the soil. Is it a demon, or something more? The movie has no answer. What it does contain, however, is a third act chock-full of optical illusions that look like they were painted on the frame with a cartoonist’s pens. Giant red blobs appear on the edge of the corn fields, always at a distance to obscure their detail. It approaches the distraught adults, and threatens to consume its evil little followers. There is of course a last-minute epiphany that leads to the torching of the corn fields, but a bigger quandary lodges in our heads: if a malevolent force is powerful enough to sway the nature of an entire town’s worth of youngsters, what good is a fire going to do in stifling its lure?

The movie is a long, tiresome, dimwitted slog through its material. No attempt is made to create resonant personalities. The adults, occupied on screen by two competent mainstream actors – Peter Horton and Linda Hamilton, respectively – are never engaged in the conflict, instead commenting on it as if scientists studying a rat maze from a safe distance. The young stars, meanwhile, are never modulated; it’s as if the director simply points the camera in their direction and encourages them to be flamboyant, like victims of Ritalin overdoses. Courtney Gains offers a more pointed offense: his Malachai, a teenager hell-bent on destruction and violence, is like a vessel of chaos without the foundation, and there’s never a moment where he isn’t seen frozen in a state of hysterical overkill. The youngest stars, meanwhile, have the distinction of attempting to seem sincere and innocent in the midst of so much mayhem, but look more clueless than informed; towards the end, there is one final jolt that ought to leave everyone involved momentarily stunned, but they join in on the laughter as if resolved to an illusion of this all being an elaborate game. Nothing says danger, I guess, more than being able to find an excuse to laugh at it all.

Which begs the question: why not just approach the material as comedy? Because the premise doesn’t allow for that sort of wiggle room. Everything is conveyed straight, sincere, and without irony. The pitch of the actors never quite reaches the sort of camp you would expect of unintentional satire. And the moral questions are usually asked with a deadpan, sobering awareness that robs it of all interpretation (“Did you rewrite the Bible, or just the parts that don’t suit your needs?”). By the end, we have observed the narrative through eyes that paint a very bleak portrait, full of senseless blood and mayhem, and yet the laughs never come. Why bother with any attempt? This is a movie that knows its path, follows it till the final frame, and still manages to inspire enough resentment to make its glaring errors seem more painful than hysterical. The burning of the corn field is an adequate metaphor; at least fire puts an end to all the wasted time of these poor suckers.