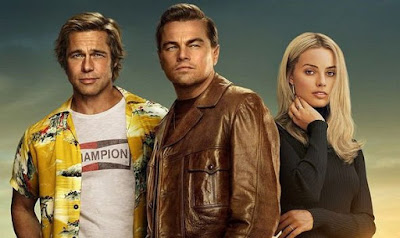 Meanwhile, their intersecting lives play out with a conventional conviction: usually occupying the frame while the director fetishizes all the details around them. The year is 1969, and Rick, fearing the end of his road as a notable star of the big and small screen, has been encouraged by Marvin Schwarz (Al Pacino) to take some roles in Italian westerns – a new rising commodity – before bad career choices push him into obscurity. That is not advice he greets eagerly, but the slipstream of popularity is a path from which there must be no yielding. Yet these Italian films are hardly reputable in his eyes. They require him to disappear into roles rather than stand out in them. What good can that do him when so much of his stigma has revolved around audiences recognizing his face? The transition of his attitude plays like a metaphor describing the shift in ideals populating the industry in the late 60s, when the more flowery traditions were being eclipsed by a new wave of hard-boiled provocateurs. The tragic divide, some would say, was the arrival of Charles Manson and his cult of rabid followers, who caused a wave of chaos in the Hollywood Hills that jolted a new generation of artists out of their comforts and plunged them head-first into a world of constant melancholy.

Manson’s very existence is as important to the fabric of “Once Upon a Time in Hollywood” as those of the two leads, and how each will converge is too precious a detail to share in a movie review – but what they create, collectively, is a sharply drawn yarn with a great affinity for its era at the center. Not a single detail is left to speculation or guesswork. Hair styles and vernacular embody the ironic precision of the culture. Iron doors crash and clang at the front of houses and restaurants like reminders of the rust now gathering around them. The music swells with a retro gusto. Often, the camera will move away from a character’s face just to refer to the materials they consume: cans of beer, old vinyl players, even fluorescent signs lining the highways. These are tokens from a time that Tarantino refuses to let remain in the past, even as the weight of cultural progression erodes all that he celebrates. Moreso than even “Kill Bill” or “Pulp Fiction,” he leaves little doubt that this is all transpiring in a time of vintage saturation. And among a small cluster of filmmakers in the 60s who would create faithful time capsules of their period, some would say only Michelangelo Antonioni was more obsessed with hitting the bullseye.

This is but a small facet of what he accomplishes in his 9th – and reportedly final – film, but as much as his career-long prowess has depending on the referential homage to a handful of his favorite filmmakers, so does the fabric of this picture function on the emphasis of a personal fabrication. Other merits also paint the portrait of a man who has learned to appreciate less flowery spectacles. The violence is drastically toned down. Characters do not always slip into meandering monologues, however enjoyable or biting. There is a scene in the second act in a movie theater that is beautifully restrained: Sharon Tate (Margot Robbie) has just wandered past a movie theater showing a picture she co-headlines with Dean Martin, and after being invited in she sits, eagerly, at the front of the balcony to observe the audience take in the final product. Chuckles and expressions of glee fill her with confidence. There, in the dark, she becomes one with a celebration. Of course we view this exchange with painful hindsight given the historical trajectory of Tate’s life, but loving and resonant was the path she carved for herself, and for a brief shining moment, Tarantino relishes her ability to transcend star quality and become the eager young soul that so many knew her as. She was, for a time, hopeful for her own future.

The movie works well as a narrative, but its greatest strength is in how it isolates those sorts of precious moments among characters – some loving, others sad, many foretelling of the dark realities lurking in the periphery. Had he been younger and more audacious, the shadowy exteriors might have been his primary focus; it would be easy to see his heroes use their self-reflection as filler for more violent episodes, and their plight would be made weightless by a biting sarcasm interchanged with the blood splatters. But now we see, for the first time, a man resolved to cut to the soul of the matter: to see the very spirit of the people he populates his movies with. They are not talkative stand-ins for a hipster ideology or satirical avatars, but full organisms that exist on the precipice of a life-altering event – in this case, the absolution of cinema itself. This is an idea written and spoken of ad nauseum among film scholars and critics alike, and with the change of the times came the integration of the more obtrusive styles of Fassbinder, Scorsese, Coppola, Herzog, Bertolucci and Friedkin: men who simplified the filmmaking code and soaked it in the cynicism of the real world. Tarantino’s film, sub-consciously, seems to be centered on one key thought: how would he have dealt with this destiny had he been present for this shift? The short answer is he would have rewritten the melody. And so he must, in this case, with a third act that functions much like the final scenes of his own “Inglourious Basterds” – more like an elaborate fantasy that sees historical accuracy as little more than a nuisance disrupting the emotional momentum. That counteracts the philosophy of historical purists who will see rewrites as spitting on the legacies of its subjects, but I would argue something more direct: is he not, in effect, writing the wrongs of the past in order to more fully celebrate the legacies of these people?

Nonetheless, some have vocalized disdain for that approach. Consider a recent controversy surrounding the family of Bruce Lee, who reportedly took offense to his portrayal in the film. The scene: Cliff and Lee are exchanging barbs on the set of a picture before engaging in fisticuffs, and the dialogue is saturated in the sort of arrogant machismo that you would expect of men who are essentially trying to validate their masculinity. Does the sequence paint Lee in an unflattering light? Perhaps. But it is too brief and silly a scene to really derail any notion of his reputation.  Even if it might have attempted to create more than just a raised eyebrow, who cares? What does it accomplish to hold Tarantino to a reality that he has no intention of substituting for truth? Isn’t the audience who goes to his movies perceptive enough to draw line between what is a sincere depiction and what is embellished? The argument stresses the same sort of paradox that afflicts his transition from youthful and celebrated provocateur to elder auteur: the inability of newer audiences to connect with his brand of humor, however politically incorrect or irreverent it may be. In some ways, he may see commonality between that reality and that affecting the characters of “Once Upon a Time in the West,” who too are watching hopelessly on as their aesthetic is eroded down to its rawest materials. This, above all else, is a timely film for him to make, and wherever you may fall on the pendulum of support, there is no denying he provides the most thoughtful discussion point of any studio release of the year.