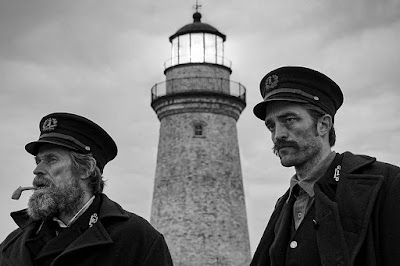 The premise is like a blank canvas for all the impending smears. Ephraim Winslow (Robert Pattinson), a wanderer from somewhere up north, has come down the coast and taken a job on as an assistant to a lighthouse operator (Willem Dafoe) in the middle of a season of overcast skies and brisk wind currents. Theirs is a pairing made seemingly ambiguous by a lack of preliminary exposition; they are presented just as they are, already deep in the slow grind of grueling work, without much to establish them as reliable partners on a shared mission. Brief discussions during evening meals by candlelight are more exchanges of sarcasm than they are observations of experience, and for a good while the two men meander through the narrow rooms and tight spaces as if holding back sinister secrets. This is a spillover technique for later, of course, but the movie also uses it for great dramatic exchanges – as the Dafoe character, Thomas Wake, barks orders and repulses his employee with gnawing bad habits, Winslow chokes back the urge to exhibit hostility, burying it behind eyes that seem like they are concealing a sinister eruption.

The movie shows this process ad nauseum for most of its 109 minutes, gradually building towards something that casts doubt on the certainty of the reality. The catalyst: a series of terrible storms move over the lighthouse, all while their grueling discomfort is allowed to fester into outright resentment. This encourages a plethora of savage exchanges, ranging from the drunken to the joyful, the violent, and even the homoerotic. Then, just as the Pattinson character is beckoning himself towards strange mysteries that may or may not be imagined (including an encounter with a watery siren, for instance), truths clash inward into something startling. The lead-up emphasizes all the obligatory questions: where did Winslow come from, just before his trek south for a job as a lighthouse assistant? What does he make of his superior forbidding access to the lantern? Why does he go into nightly, always concealing his reasons? Is there something up there that is of great importance? The movie supplies images that suggest something supernatural, almost surreal – including an exchange on a beach with a figure that arouses him in more ways than one. Are these images he has created for comfort, already fueled by nautical mythology and superstition? Among a laundry list of possibilities that never reach clarity, the only definite is that each of these men are united in their inability to convey a factual account of what they are experiencing.

Elaborating on that possibility, Eggers has shot his film in black-and-white, which proves to be a glorious asset; because the format is the most dreamy of all film techniques, his images don’t so much exist with ironclad conviction as they seem invented in the active imagination of the camera. One of the greatest of these shots is also the most horrifying: after awaking from a night of heavy drinking and both men end up in a physical deadlock on the floor, Winslow imagines seeing Dafoe transform into a beast made up of tentacles and slimy flesh. Most films would accept this as a visualization within an insane mind, but not “The Lighthouse”; the moment plays as if it doubts the ability to write off the occurrence as nothing more than a drunken daydream. In that moment, after all he has seen and experienced, no one can say with certainty that this is all just artifice – much in the same way, for example, that no one can exactly say if all the imaginary characters at the Overlook Hotel were just that, or if they were literal projections emerging from psyches driven to madness.

So much of the picture is played to evoke the underlying horror of its era. Just as the look and the production design are symbolic of the early 20th-century values (or lack thereof), so is the dialogue written in the style of the old-world nautical yarns – particularly those of Herman Melville, whose own “Moby Dick” may be the film’s greatest spiritual inspiration. The slow and agonized pace, meanwhile, certainly is drawn from Kubrick’s devious visions in “The Shining,” and the elaborate, almost absurd illusions (if they can be called that) seem inspired by Nicholas Roeg (“Don’t Look Now”) and F.W. Murnau (“Faust”), who were skilled at blurring the lines between literal reality and their more sinister daydreams. Their usage is not plagiarism – Eggers marries their sensibilities to a personal stamp that takes delight in keeping things vague, even when there may already be a clear vision swirling in our thoughts. The setting is also key: away from the conveniences of modern awareness and technology, the terror plays as if it were birthed from an alien intelligence, and the victims are rarely skilled enough to outsmart the challenge.

There will, of course, be viewers who will attempt to rationalize the picture as an exact narrative, taxingly deciphering specific moments and nuances to shoehorn the observation into a story that makes sense within their minds. My advice is more straightforward. Allow the film to sweep over you. Don’t burden yourself with the cognizance of common sense, or with the nagging feeling that everything you might be seeing can be explained away by an elaborate psychological definition. Much like his “The Witch,” Egger’s film is about the frivolity of answers, in a world that muddies the waters of events and relished the psychotic breaks of its characters. These are the values of a filmmaker who brought his chutzpah to the core of the mechanics, storyline or plot be damned. They are, for lack of a better descriptor, the trademarks of what we now embrace as pure cinema. “The Lighthouse” is a total exercise in style, brought to glorious excess by showy performances and visual gimmicks right out of an ambitious nightmare. But they fit together effortlessly, creating a whole that is sometimes shocking, other times challenging, and always rousing.