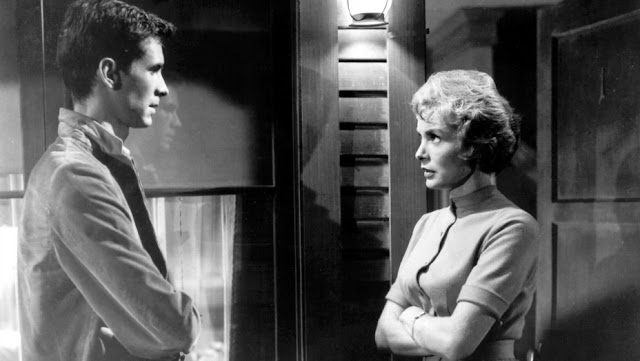 In truth, the moment is symbolic of how Hitchcock was adapting to the changing tides of filmmaking. The story of Marion Crane, a love-struck middle-aged woman in Arizona caught in the doldrums of a professional grind and stalled romantic possibilities, was not so much a study of rash decisions as it was a catalyst exposing the darker natures of strangers in the midst. Hers is a fate that functions as a metaphor for how the master of suspense was perceiving the evolution of cinema, no longer able to rest on the laurels of mere convention or traditional paths of tension. Now the industry was knee-deep in the perils of startling honesty, and Norman Bates was both a consequence and a shock to the system he helped establish. Observe his arrival in “Psycho” and don’t think of it as just a setup for a grandiose twist; view him as a sledgehammer crushing the walls holding back all the eventual movie monsters of the present. In those scenes you are experiencing a total epiphany of the format, from the wisdom of a man who was changing his art on the cusp of a cultural eruption. It is the most revelatory passage of material ever captured in a horror movie.

We routinely revisit “Psycho” not merely as admirers, but as relentless gluttons. So untarnished are its values, so relentless and unequivocal is the skill of the material, that our access feels as exciting on the tenth viewing as it did on the first. Many of Hitchcock’s movies play against the erosive quality of time, but the terror of the Bates persona benefits from the added foresight of psychology. He is not a man of primal instincts, but the consequence of mental traumas the movie has a vested stake in. Drinking in the details of his early encounters with Marion, a private investigator and their distraught peers and relatives is never burdened by the more predictive qualities of suspicion, because it matters not to us how it might all conclude. We are there in the moment, compelled on by an inability for others to see beyond the ruse and realize the truth of the situation. And at the crest of that descent into madness is a final reveal that still stings with vicarious potency – we fantasize, each time, how shocking it must have been to be among those first audience members in 1960, when they were united in a collective gasp at the final onslaught of the truth.

All the film’s key characters are humanized by a relatable desire to overcome glaring obstacles. Marion is passionately in love with Sam Loomis (John Gavin) but growing bored of private trysts with him in run-down motels. His mode is dictated by an inability to provide more than just companionship; recently divorced, alimony payments have rendered him financially unstable, and he worries Marion may not be satisfied attempting to build a life with a man unable to provide. Though he eventually agrees in the early scenes to go public with their steamy affair, her knowledge of his constraints plant the sort of dubious doubts that are typical of the more notable Hitchcock heroines. Almost conveniently, she comes into the possession of $40 thousand cash after her boss sells a piece of real estate to a local tycoon, although the money is never destined to arrive at the bank; she pockets it and flees town in a series of scenes that are combustible in their friction, involving encounters with a suspicious police officer, an auto dealer and, eventually, the Bates motel, where she seeks shelter at night during a devastating rainstorm.

Norman Bates and Marion are not unlike each other in their need to endure. Just as she has rationalized the theft as a necessity to seek happiness with Sam, he too has created an elaborate fictional reality in order to hide away secrets that would undermine his business. She finds him charming, if puzzling. His dialogue is perfunctory at first, but some of the quips (“We all go a little mad sometimes, haven’t you?”) foreshadow the audience observation. What is he hiding, or attempting to suggest? Is he fascinated only by Marion because she is a warm body in a time of isolation? Or a kink in the coils of his safe pattern? Their time together moves them into opposing directions: she towards an epiphany that may neutralize the crimes she set in motion, and he towards the madness that will unravel her tenure. Then comes the famous shower sequence, in which an obscured figure – we assume it is Norman’s mother – throws open the curtain and stabs Marion mercilessly until she is collapsed in a chilling death stare towards the camera. Hitchcock plays his great unspoken mystery with coy assurance; after her murder, Norman is seen in apparent shock, cleaning up after the culprit and dumping her body and car in the nearby swamp. The things a man will do to protect his mother are boundless, even in the face of bloodshed.

That, in turn, drives the need of the supporting characters: Sam, mystified by Marion’s disappearance, Lila (Vera Miles), her sister, who believes something terrible has occurred to her; and Arbogast (Martin Balsam), a private investigator hired by Marion’s boss, who knows she is responsible for stealing the money but stops short of assuming mere greed. Each of them is destined, of course, to arrive at the motel itself: the last known place Marion was seen, occupied by a manager who carries on nonchalant while vacant rooms and guestbooks point towards unsettling possibilities. Arbogast believes the answer lies with Norman’s enigmatic mother, although any desire to question her is thwarted by Norman’s own insistence. The solution: sneak into the house on the hill and interrogate her while he is a way, a decision the audience is already aware will conclude in yet another shocking moment of terror.

All the traditional staples of the Hitchcock doctrine are there, from the agonizing plod through suspenseful situations without release to the clever use of MacGuffins to provide dependable distractions. The difference, this time, is that he places great emphasis on mindset over murder – a genuine desire to understand why people are murdered rather than by whom holds the knife. That might be easy to say because we are seasoned enough to know the outcome, but those are questions I found myself asking all the same while attempting to play dumb during a recent revisit. The movie is audaciously modern in the way it revels in the nature of Norman’s strange being. Naturally, the film will exploit that build-up in a whopper of a climax that occurs in the house’s basement, but the final shot is more resounding: it peers unflinchingly into his mind instead of relegating him into the confines of judicial punishment. Many high profile film scholars take issue with the redundancy of a psychologist explanation occurring towards the end, but they may be cloaked by their own hindsight; how many viewers in a time well before mental illness awareness would be able to arrive at some of those same conclusions on their own?

A lot of these lessons gradually became lost once “Psycho” emerged the gold standard of the more intellectual horror films of the modern era – almost none more vulgarly than the shot-by-shot remake directed by Gus van Sant, who indirectly created an apropos case study for how modulation and mood are easily lost when you portray the scenes with mechanical conviction. Another prominent virtue of the original: the black-and-white photography. It was more than fate that Hitchcock shot his great film on a cheap scale with primitive television cameras rather than his upscale Hollywood crew. Color film stock would never have worked, apart from the obvious reasons. Because Crane, Bates and the other key players seem propelled by the uncertainty of their actions, they would have felt too grounded, too literal, in photography that was glossy and saturated. The monochrome palette makes everything much dreamier, much more uncertain. It adds hypnotic emphasis to the mental plight of its dangerous case study, a man that wants to appear normal and functioning, even though it must occur in a world where solitude is the safest place for him to exist.

Some of the better directors remember this education better than others. Brian De Palma, a self-proclaimed student of pure cinema, still practices the curriculum of the Hitchcock style today, and his films “Carrie,” “Blow Out” and “Body Double” are terrific examples of how the process of tightly-wound stories can still inspire a fearful sting (another case can be made for “Dressed to Kill,” essentially a modern rewrite of “Psycho”). Similar can be said of the early M. Nigh Shyamalan films, which are decidedly flawed but nonetheless punctuated by effective episodes of horror. And above all else Hitchcock could, realistically, take credit for birthing the same flamboyance of visual terror that would eventually evolve into Italian Giallo, as seen by the introductory work of Dario Argento and Mario Bava. If “Psycho” earns a special place even among the master’s extensive back catalogue, it’s because the movie stands defiant against the cultural slipstream, where its fine edges remain alarmingly sharp. And Norman Bates, one of the greatest of all movie antagonists, is provided the sort of magnitude that only perpetuates our morbid curiosity with serial killers and movie maniacs: one in which all the negative experiences are relatable, and therefore closer to the dreadful possibilities lurking in ourselves.