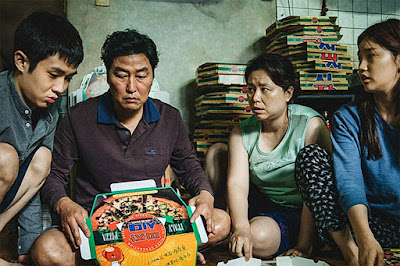 No other film of the year, or maybe of the last several years, will be as easy to decipher. Rejecting most of the traditional cinematic cues to inspire swelled emotions or roused suspicions, Joon-ho has delivered what may very well be the most significant landmark of his career, a picture that audaciously devours the force of convention and transforms it into a feverish undercurrent, driving what can only be described as an engine through the odyssey of mayhem. Each moment, building on a vague morsel contained in the last, never reveals or predicts an outcome; instead, we lurch forward into an abyss where we can never manage to stay ahead of the predicament. Lesser sorts – that is, simpletons or enthusiasts of the mainstream – will experience frustration or even resentment at the attempt. For the more seasoned, the act represents the very soul and blood of the cinematic method.

We can sense this force brewing early on, during an exchange between young Ki-woo, son of a very poor family, and his friend Min-hyuk, on the opposing end of that. The up-and-comer is a tutor for the daughter of a wealthy socialite, but his academic trajectory means he will no longer be able to hold down the position. Sensing the fragile financial situation of the Kim family, he suggests Ki-woo as the replacement. But what qualifies him other than his streetwise demeanor? Nothing, perhaps, other than his ability to manipulate a situation to his advantage. And what follows is the first of many priceless interviews with Yeon-kyo Park, a wife and mother who is easily won over by the impenetrable focus of the young man standing before her. Her trust in him cascades ambitiously; needing a caregiver for her young son, he recommends Ki-jung (secretly his own sister), who in turn sabotages the Park’s limo driver in order to suggest the hiring of Ki-taek (their father), who then contributes to the premature dismissal of the Park housekeeper Moon-gwang in order for them to hire Chung-sook (their mother). How the movie handles the placement and accuracy of their deception is skillful; the Parks are not idiots or even simpletons, but have allowed themselves to be duped by an illusion that is just too perfect to undermine.

It turns out, almost shockingly, that their desire to feed off the privilege of their new employers is a shared commodity with the ousted housekeeper, who returns one stormy night while the Parks are away on a camping trip to collect a secret stash she has been protecting in the basement. This leads to a discovery that invariably balloons into a series of hostage situations, bloody exchanges, narrow escapes and sad epiphanies that defy the nature of common storytelling laws, which otherwise seem poised to lead towards other avenues. But this is exactly the sort of sleight of hand trick that “Parasite” will ultimately be lauded for. It sees no ordinary line between cultural points. It has confidence in the chaos. No simple or even straightforward narrative would have been able to successfully highlight all of Joon-ho’s talking points. Yet he has a system within the madness that never allows the film to veer off into camp or comic showmanship. The temptation must have, admittedly, been great: any of his performers, particularly the younger ones, command the screen as if pitching for a horror film that never quite manifests. Think for a moment how confident and steady a filmmaker must have been to modulate all this insanity without losing his focus on the target.

The movie is a bold, audacious litmus test of the gut instinct. All our fears, suspicions and predictions are nothing more than impulses destined to be shattered, in the thick of a yarn that plays like a sledgehammer against the glass boundary between routine and volatility. No matter how dumbfounded we become, no matter how intense our sense of awestruck, always there is something more ahead to blister the battered senses. Sometimes that involves unforeseen twists, to be sure, but at other times it involves cruel honesty, too. Consider a scene involving old Ki-taek, the patriarch of the Kim family; towards the climax, his mission is lodged in our minds as a certain act of survival, emphasized by a quiet monologue where he concedes defeat against his warped perspective. And then… he does something that is almost completely out of sync with his pattern. Is this out of step with the movie’s momentum? Not entirely. What Joon-ho is logically suggesting here, just as he is elsewhere, is that class war often turns us into unpredictable beasts, and even the steady hands of a seasoned player are capable of knee-jerking for an opposing value.

If plot descriptions – in my review and many others – seems deliberately vague, it’s because “Parasite” is not the sort of film to be reasoned with in the manner of specific reveals. Much of the screenplay requires its audience to go in blindly on its first viewing. Subsequent visits, after the shock has worn down, will only reveal the skillful conviction of the direction – how Joon-ho stages scenes so cleverly for the benefit of the Kim manipulation, how he casually reveals backstory in mere utterances of dialogue, how shadows and light amplify the spaces between people in sparsely-furnished rooms, and even how their emotions seem curiously stilted while so much madness is going on around them. The primary thesis, if you can bring the entirety of the experiences towards one, is that these lives function under an illusion of order that existed long before the argument was made against it. When it shatters, those trapped inside can only be expected to respond in the context of their nature. And their nature is to do whatever it takes to guarantee their own survival, even if it means playing against another’s perception of plausible behavior.