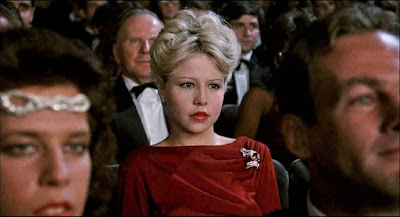 Forget, for a moment, all the dreadful things you have heard about “The Lonely Lady.” Dismiss the conventional criticisms that peg it as one of the more pronounced turkeys of its time, ranging from the shoddy acting to the implausible premise. Absolve yourself of any knowledge of Pia Zadora’s strange rise to fame, or how her entire participation in this mess came to be. Resist the urge to read through some of the cringe-inducing dialogue, avoid the temptation to blame shoddy makeup or inept scene staging, and ignore all attempts at understanding the long and notorious back-story. Those notions will only color your view. Oh, an exhaustive list of problems could be assembled about the movie in question, and few of them would be arguable, but those traits in themselves do not quantify all the reasons this film endures so vividly. Something more precise, more glaring, had to be wrong with what was on screen. After lumbering through a recent viewing, I believe I finally deciphered the key distinction: that this may be the most shamelessly evasive drama ever written.

The giveaway lies in any number of the film’s transitions. Consider a pivotal moment towards the end of the second act, when the Zadora character, Jerilee Randall, has the rug yanked out from underneath all her idealistic aspirations. The procession begins when she is seen taking to bed with her nightclub boss, Joseph Cali (Vincent Dacosta), after he has promised to connect her with possible clients to buy her new screenplay (she has protested sleeping with him the whole way along, mind you). An elaborate montage shows them laughing, sipping wine, making out, playing naked pool, and thrusting violently on a mattress surrounded by candles. Then he forces a pill in her mouth, insisting she swallow it while restraining her. She struggles. The scene abruptly cuts, goes right back to the nightclub, and nothing more is said of the incident. There, she meets an aged Italian couple who express interest in her writing. They invite her back to their penthouse, but the agenda is sex rather than business. She concedes, thinking it will influence them. But they are not interested in the writings of a young female scribe, and when she storms back to Joseph’s office, he throws the script in her face while entertaining two naked waitresses. Beg pardon? Yes, the movie has robbed audiences of any chance to see some kind of big outburst, because the scenes were probably never filmed. Instead, we get a resolution in which she tears up the script pages and launches into a hazy mental breakdown, right before showing up nearly comatose in an undisclosed mental hospital that does not seem bothered to medicate or restrain its patients.

Any number of shoddy dramas can be made that avoid all the painful answers or realizations of a setup. That is nothing new for a film industry that barely understands simple human dynamic. But “The Lonely Lady” exhibits a rare case of taking things to the extreme without having the balls to provide outlet. It dangles us over the edge senselessly, and then robs us of basic thematic insight. Are we supposed to sympathize with Jerilee, who came to the bright lights of Hollywood as a young aspirant and then left in a crumpled emotional tatter? How can we exhibit sympathy for her when the film she is surrounded in never puts her situation into context? Rarely in any number of bad movies has an actress been so thoroughly exploited for the sake of nothing. More famous movie lore would have you believe that Zadora, a marginal talent, contributes to her own lack of empathy; she is rarely plausible on screen, and her lack of skill prevents the material from sticking to something substantive. A more pointed observation, especially in this age of #MeToo, is far more important to contemplate: how is any actress, extremely talented or otherwise, able to transcend material that was written to mock their very gender?

Process all the film’s numerous flaws through these lenses and you begin to sense the accuracy of that declaration. The offense begins early on, at the final stop of a high school party after Jerilee has won a trophy for being the best writer in her class. Hanging among a trio of horny teenagers (one played by Ray Liotta), she is cornered and then violated with a garden hose near a backyard pool. The following day, her problem is quickly dismissed by her mother, who will not fight to accuse the offender because she doesn’t have the money to put away the son of a wealthy Beverly Hills mogul. Nonetheless, her trauma has attracted the attention of famed screenwriter Walter Thornton (Lloyd Bochner), whose property was the site of her sexual humiliation. They exchange kindly gestures, express commonalities and even wax philosophical about the measures of solid screenwriting. Eventually they will wind up on the altar, but not before a very brief protest by her mother, who insists he is too old for her in one scene and then is seen lavishly cozying up to him at their reception. And wouldn’t you know it, she is also the first to dissent as soon as the newlyweds quickly separate (“You should have never left Walter!”).

Jerilee’s luck plummets. After a divorce that happens off-screen (and is facilitated, mind you, by a single scene in which her interference on set embarrasses him), she takes up with a rising movie star named Guy Jackson (Anthony Holland), who is married. Theirs is a sexual tryst that is fun and exciting, until Jerilee shows up on set one day to tell him she is carrying a child. His shame translates into a dismissal, and she announces to her mother that she plans to terminate the pregnancy, without any other word being said of the matter. That’s it – no discussion, no thought, no indication of how hard it might be to make that sort of decision. It’s merely a narrative gimmick used to move the main character away from one emotional setback and into the makings of another. Only later, after the material between she and the nightclub manager has transpired, do we sense that this is actually a technical pattern used by Peter Sasdy to get to the climactic speech as quickly as possible, without bogging it down with all that pesky exposition or psychology.

What of that climactic speech, you may ask? It is one of the most unfortunate and miscalculated monologues ever committed to the screen. After enduring a long career of missed opportunities and sexist agendas, Jerilee finally makes it to the pivotal moment where she is up for a prestigious industry award, and wins it while the audience is full of all those detestable men and women who used her for their own selfish gratification. For a brief moment, we suspect this will be a rousing indictment against their practices, however shallow. Alas, what the screenplay by John Kershaw and Shawn Randall does instead is supply her with dialogue that would make the most conservative feminist weep: a pathetic, self-pitying proclamation that ends with her declining the award and running off into the night while the boos of the crowd echo into the final shot. By that point, most bad movies inspire their viewers to be thankful for any sort of ending; here, we want nothing more than to hurl insults at the filmmakers for being so willing to flaunt their unabashed misogyny.

The material was based on a famous book by Harold Robbins, who claimed that his heroine was inspired by the famed Jacqueline Susan. One wonders if she would have vomited at the mere insinuation. Every fiber of this idea, whether it belongs to the source or was invented specifically for the film adaptation, reeks of scorn. It plays like a crime against basic human decency. Is that why it endures so prominently for filmgoers, who often revisit the material in order to laugh along at the gross incompetence of it all? Hardly. I suspect few are willing to look that deep, especially given how completely pedestrian the surface of the picture is; to them, the experience functions better by simply laughing at the terrible execution. In reality, though, “The Lonely Lady” isn’t awful simply because it has insurmountable flaws. It is validation that an industry with continued claims of sexism against it may be deserving of the backtalk.

Produced by Tino Barzie and Robert R. Weston; Directed by Peter Sasdy; Written by John Kershaw and Shawn Randall; based on a novel by Harold Robbins, adapted by Ellen Shepherd