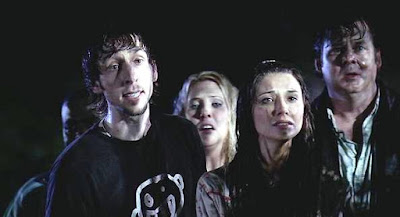 The movie is almost too spirited for words. Some, rightfully, might suggest that our comic responses are signs of a collective desensitization. Others still will regard it all as an involuntary impulse, the result of needing a release from visual gimmicks that have no moral restriction. In truth, “Hatchet” is akin to the spirited bravado of Sam Raimi’s “Evil Dead 2,” made with the cheerful self-awareness of a filmmaker who was smiling vindictively from behind a camera that never looked away from the overzealous splatters or torn flesh. If we enjoyed ourselves, it’s because we could look beyond the grotesque exterior and sense their relentless sarcasm. Meandering beneath 85 minutes of grotesque impulses scattered throughout “Hatchet” is the same exact philosophy, shamelessly exploiting the painful and repugnant possibilities of low-tech showmanship without underlining it in any notions of sincerity. At some point we cease observing the mangled ghost of Crowley as a villain and more as a Darwinian warning – because anyone stupid enough to wander too close to a terrible legend without listening to the wise advice of others is fair game in his nightly slaughterhouse.

The legend of Victor Crowley is in the tradition of the greatest of high-profile horror movies villains. Born disfigured and eccentric in the murky depths of the bayou, Victor Crowley spent much of his life isolated in a remote cabin by his loving father, who was also widowed by his birth. Unfortunately, local boys knew enough of the mysterious and deformed boy to torment him from a distance, and that lead to the fateful night when his legend was born: the young bullies set fire to his cabin while he was trapped inside, and senior Crowley inadvertently killed his frightened child while attempting to hack down the front door. Years passed on and his father eventually died broken-hearted, providing the key emotional morsel that would allow the spirit of the angry boy to return to Earth and stalk the swamp each night, ready to avenge his father, whom he realizes was only trying to protect him from the cruelty of others. In adult form, Victor Crowley is presented not as a ghostly apparition, but as a muscled brute in suspenders that is a cross between Sloth from “The Goonies” and the creature in “Predator.” Green never bothers to obscure detail of him, either; in the dim light of the marsh, somehow the only beams of visible moonlight are able to center directly on the faces of the key players, especially at the pivotal moments where a massacre is ready to transpire.

And boy, what a massacre it is! The body count of “Hatchet” is especially significant given the brief length of the picture, minus an initial 20 minutes of setup and exposition. Some of the prospective victims are perfunctory: Ben (Joel David Moore) is a guru of supernatural phenomenon on vacation in New Orleans in order to forget about a painful breakup; Marcus (Deon Richmond) is his best friend, whose mind is more on chasing girls than consoling grieving buddies; Shawn (Parry Shen) is a tour guide who plays up the legend without realizing its validity; Misty (Mercedes McNab) is an aspiring actress too dimwitted to realize her cameraman is only interested in seeing her bare breasts; and Marybeth (Amara Zaragoza) is the brooding, secretive spectator who may have a personal stake in the legend, which has apparently claimed the lives of her brother and father in the opening credits. Are any of them equipped to deal with the fallout of their foolish decision, which will claim the lives of nearly all who occupy their tour boat through the swamp? The conventional wisdom of slashers is that someone, at least, must remain alive in order to provide the proper connection for a sequel. Care to guess who that will be?

The movie is a triumphant reminder of the plausibility of physical showmanship. Not a single shot of Crowley’s mayhem is displayed by computers; the blood splatters, torn ligaments, beheadings, stabbings, slashings and wounds caused by power tools are all delivered using physical gimmicks, recalling the glory days of horror when there was nothing else to rely on other than the imagination of makeup artists. One of the more sensational displays, however coarse, occurs at the onset of the discovery, as an elderly couple is marching up towards an abandoned house in the woods in search of help. Crowley appears out of nowhere and takes a machete to one, in a scene that is prolonged by both his hysterical agony and the verbal shock of the onlooking ensemble. Then, in a move that is as skillful as it is shocking, he rips off the wife’s head while leaving her lower jaw and neck in tact; the camera spies the remains with some level of detail, perhaps to validate our suspicions that the effects wizards never wound up falling asleep in anatomy school.

If I make this all sound more amusing than it should be, ask yourself this: is any of the aforementioned gore any worse in “Evil Dead?” Does it not resemble the more celebrated nature of Giallo pictures, which are rarely taken seriously despite dealing with much more somber meanings? Green’s influences are far more irreverent; he lacks the sincerity of, say, a John Carpenter or a Tobe Hooper, but is not content to hold back on the extremities. A less capable filmmaker might not have managed it as well. So, too, could this material have seemed awkward or mismanaged, had it dealt with a flesh-and-blood madman with some level of psychology instead of a far-fetched legend. In a way, his intention is in the broader tradition of Hitchcock, who gleefully relished the idea of playing his audience. In both cases, we never know what to expect and are often startled by the outcomes. Furthermore, neither one means to underline their excess with cynicism. “Hatchet” is in that greater tradition: the one that doesn’t mind going all the way with its depravity, provided you understand that there is a breezy ideology fueling the sentiment.

However, quantity of} legal commentators believe that wagers over interstate networks are nice if state regulation doesn’t 메리트카지노 expressly prohibit them. If true, then wagers could technically be transmitted between states the place sports betting legal, opening up a whole slew of prospects. Interstate betting hasn’t been launched but, however time will tell.