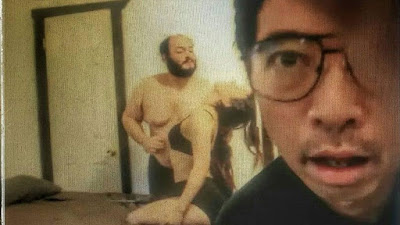 Could a movie like this have worked on any level? Entertainment, surely, was not on anyone’s mind. That means the opportunity could be narrowed down to one of two plausible possibilities: present the footage as a straight document of those living horrors or intercut it with some sort of analysis. The latter, surely, would have been far sounder, and perhaps a great movie remains to be made about the Miranda Murders that utilizes this approach. Unfortunately, Rosvally opts to presents the material in such fragmented fashion that it completely detaches from its underlying motive. In the course of 73 minutes, we see the disturbed minds of Lake and Ng discuss their goals, overpower unsuspecting victims, taunt them to tears, bash their heads in with hammers, rape them, chase them, imprison them, bury their remains outdoors, and somehow find time to argue about each other’s own skill. How do you pack so much into a movie that otherwise feels like it was destined to be a short subject? The movie cuts away from action so often, so haphazardly, that we are never allowed to penetrate the surface of whatever psychology the filmmakers hope we will take away from it.

A study of the men involved provides intriguing clues. Both Rosvally and his production partner, G.R. Claveria, began as friends on an offshoot theater project in 2016 when they contemplated the idea of uniting for a feature film. Tapping into their mutual love for horror, they made a dubious realization: together, they both resembled the real culprits of the Miranda Murders, who thus far had never been covered as subjects of a major motion picture. Therein this dubious idea was born, helmed by the same buddies who would be destined to star as the primary villains. The means what you see on screen is, to its credit, impassioned. Neither man is pitching themselves halfheartedly, because their stake goes beyond the mere notion of what they must accomplish in front of the camera. There is a scene towards the middle where Ng places his camera to the side of a mattress and is seen coercing a woman into rape while she cries and pleads for mercy. The execution is convincing, as if each is channeling the full scope of the context. Their problem is that they never let us into it; just as the momentum is established, the scene cuts to another encounter, then another, until we lose track of who the captives are and whether the killers have made new acquisitions off screen, or are simply recycling others. Would it have really been as difficult, even for the sake of the fantasy, to just assume Rosvally and Claveria would leave the camera running long enough to take in the full dread of the experience instead of just the brief mechanics of it?

The rhythm is established early on, after a brief setup in which Lake conveys his disturbing manifesto while he sprawls out in a recliner. Accompanying him as a pseudo guinea pig is his wife Cricket (Jenna Keefner), who proves to be a suitable stand-in for an assortment of restraints being tested to use on prospective victims. Initially, she finds amusement in the idea; later, Ng eavesdrops as Lake berates her loudly for not being fully obedient, and in the next scene she is telling the camera that she intends to divorce him and move in with her mother. In a fully-realized film, a catalyst like that would be the key moment where the killers go beyond the point of salvaging their souls; here, it’s just a gesture to remove one obstacle from the footage in order to make room for another. There is a vicious cycle to the method of Lake’s misogynist worldview, but Ng appears to be in over his head like a boy seeking the approval of a pessimistic guardian. That means his tendency towards violence and punishment is far more unrestrained, and in a key moment during the footage Lake berates him over the notion that he always kills the women too early for them to be trained properly.

Does this reflect the reality of the murders? Was Ng the instigator of the more sinister misdeeds? Was Lake more of a sexual sadomasochist than a homicidal maniac? The movie seems to be asking questions it has no intention of resolving. So, too, does it cloud the issue of personal responsibility. Consider Lake’s wife, for example. She disappears as the killing commences, but appears again on screen, briefly, to have a sexual encounter with Ng, and later still to be implicated in one of the murders. Is the movie saying she was involved, or bears some blame for what happened to all those people? The argument could go either way; none of the editing is consistent enough to establish her awareness, much less her physical involvement. For all we know, Cricket could simply have been aloof to all the chaos going around her, only appearing responsible because she knew how to show up in the wrong places at the wrong times.

Some people might take delight in the open-endedness of that approach. I find it irresponsible. The movie is, above all else, a fictionalized record of events that otherwise were based on absolute truth, and with that distinction comes the task of anchoring what you convey. This might have been where off-camera dialogue or narration could have been necessary. Remove the idea of this being a gritty, horrific ordeal and turn it into a full-on dramatized documentary, where the issues could be discussed and given levity. To do any less is to risk creating a disservice to those who literally died to provide the premise. Claveria and Rosvally’s problem is that they do the minimum – they fill the images with all the gush and suggestion of the terror while robbing it of basic tonal certainty. Are they fascinated by the Miranda Murders as crime enthusiasts, students of the mystifying serial killer mythos, or simply as detached voyeurs? Here is a movie that suggests they were just looking for something to kill time on until a more inspired idea came to mind.

This was a very thoughtful review and shows you took the time to watch and study it as well as us quite thoroughly. I really enjoyed your critique of the filmmaking and storytelling and greatly appreciate your notes and feedback. I would like to share with you that 'The Miranda Murders' is not meant to be "enjoyed" or watched as a movie, but as a taboo oddity (much like the Faces of Death films). Lake and Ng were literal monsters and this film is their home movie, incoherency and all. Nothing more. There is a lot to unpack and speculate on, but just like a video of a live decapitation, the lure of watching this film is that morbid curiosity and the takeaway is a genuine sense of uneasiness and a stark reminder that there are extremely ugly people out there who are not to be admired or celebrated, but perhaps studied and understood as sick. The sinking feeling that "this is real" is an unholy reminder that something about this film is simply not ok, generating real life horror. Unlike a film such as The Devils Rejects, which tackles the subject of similarly ill-moral beings (albeit fictional) and their struggles, you are not supposed to cheer Lake and Ng on or relate to them in any meaningful manner. In fact, a proper watch of The Miranda Murders is meant to punish you if you go into it thinking you're about to watch a compelling story, with character arcs of individuals who go through a Joseph Campbell-esque Hero's Journey. This does not negate your feedback in the slightest, but I hope it provides context to the original purpose behind producing the film.

Despite this seemingly very mean spirited creation, we felt a strong need to provide actual good to this world through it, the production team donates 100% of the profits from the film to charities such as RAINN, March of Dimes, the Heifer Foundation, and Three Square and we will continue to do so for all who sit to endure this torture.

Also, the movie is absolutely implying that Cricket at the bare minimum was far more knowledgable of Lake and Ng's crimes and was far more compliant than she let on. How much, is certainly up to the audience.

Thank you again for taking the time to review our film and provide this extremely in depth analysis of it. Excellent work.